Whatever happened to Joyce DeWitt? 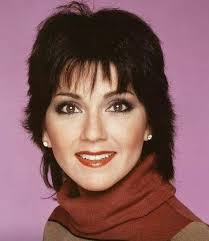 Joyce Anne DeWitt was born on April 23, 1959 in Wheeling, West Virginia, the second oldest of the four children of Paul and Norma DeWitt.  She has Dutch ancestry on her father's side and Italian on her mother's.

Joyce was raised in Speedway, Indiana, a suburb of Indianapolis.  She graduated from Speedway Senior High School and later later attended Ball State University in Muncie, Indiana, where she earned a bachelor's degree in theatre.  Following graduation, Joyce performed in summer stock in Chicago.  Until then, her plan had been to go to New York.  "I never even thought about going to Hollywood," she told Sitcoms.Online in 2011.  However,  a guest director that summer happened to be one of the senior professors at the University of California, Los Angeles' (UCLA) Department of Theater.  He relentlessly urged her to move to Los Angeles and enroll in the school's Master of Fine Arts (MFA) program.

A reluctant Joyce finally relented and agreed to attend UCLA for a while, but wound up receiving her Master Degree in 1974.  "Life unfolded," she explained to Sitcoms Online, "and within a couple of years there was Three's Company and I had this MFA and life just unfolded.  It's kind of like, your life will lead you.  If you don't try and figure it out too much and you just kind of follow your heart and that's what happened  I ended up in Hollywood, I was never going there.  And I got very lucky; I got very lucky indeed."

Joyce De Witt made her television acting debut in two 1975 episodes of Baretta, "The Goodbye Orphan Annie Blues" and "Sharper Than a Serpent's Tooth" in which she was uncredited.  She portrayed Janet Wood on Thee's Company from 1977 until 1984, after being cast in the show's 1976 second pilot episode, which was never aired.  Three's Company was a huge hit and Joyce was catapulted to television stardom.

Along with John Ritter and Suzanne Somers, Joyce appeared on the ABC sitcom about a man and two women who are platonic roommates in a Santa Monica, California apartment.  It was based on the British comedy, Man About the House, which aired on ITV from 1973 until 1976.  John Ritter played culinary student Jack Tripper, while Suzanne played blond Chrissy Snow, a legal secretary,  and Joyce played dark-haired Janet Wood, who was employed at a flower shop.  Chrissy, the daughter of a minister, was the stereotype of "dumb blonde."

Below is a 1977 publicity photo with L to R: Joyce, Suzanne and John.


There were some cast changes on Three's Company, through the years.  In 1979, Norman Fell and Audra Lindley, who played Stanley and Helen Roper, the owners of the apartment complex, were relocated to their own sitcom, a spin-off called The Ropers.  Don Knotts then joined the cast as Ralph Furley, the goofy building manager.

Suzanne Somers left the show after a nasty salary dispute.  Her final episodes on the show were in 1981. She was fired after she demanded a raise from $30,000 an episode to $150,000 and 10 per cent ownership of the show, the same as fellow castmate John Ritter's salary.  ABC refused and Suzanne finished the remaining season on her contract.  After her contract expired, she sued the network for $2,million, claiming that her credibility had suffered a blow.  An arbitrator decided that Suzanne was owed just $30,000 for a missed episode.

Somers was replaced by Jenilee Harrison as Chrissy's accident-prone cousin, Cindy Snow, a veterinary student.  Harrison soon departed and was replaced by Priscilla Barnes as Teri Alden, a lovelorn nurse.

Three's Company finished its run in September of 1984 with a two-part episode, "Friends and Lovers," in which Janet Wood marries art dealer and critic Philip Dawson, played David Rupprecht, Philip,the heir to a recently-deceased wealthy tycoon, was a regular visitor to the Arcade Flower Shop, where Janet worked.  Meanwhile, John Ritter's Jack Tripper character moved on to a new sitcom called Three's A Crowd.

After Three's Company ended, Joyce DeWitt appeared in an episode of the TV drama Finder of Lost Loves, about private investigator who specializes in helping clients find their lost loves.  She played the role of Lynn Powell in an episode of the series entitled "Portraits" (Season 1, Episode 9, Air Date: December 1, 1984).  For several years after that, Joyce took a break from acting.  She travelled the world and searched for spiritual enlightenment.

In 1991, Joyce resumed her acting career with a role on stage.  She had a part in a production of Noises Off  at Cherry County Playhouse in Traverse City, Michigan.  Joyce returned to TV with a role in Spring Fling, a 1995 television movie.  She also appeared in 1995 episode of the sitcom Cybill starring Cybill Shepherd.  The episode id entitled "The Odd Couples" (Season 2, Episode 10, Air Date: December 3, 1995).

In 2000, Joyce guest-starred in an episode of the short-lived TV.drama Hope Island.  She portrayed Miss Dewitt, the housekeeper, in the 2003 Nick at Nite Holiday Special, a TV movie which aired on November 28th of that year.

In July of 2009, Joyce was arrested for drunk driving in El Segundo, California and released on her own recognizance.  On May 10, 2010, she pleaded no contest to one court misdemeanour and was subsequently placed on 3 year's probation and ordered to take part in a nine-month alcohol program.

In 2014, Joyce portrayed Nikki in the family comedy My Boyfriends' Dogs, a television movie that aired on October 18th of that year.

Joyce prefers theatre to television. At the age of 13, she began appearing on stage.  In a 2017 phone interview from her home in Santa Fe, New Mexico, she told the Culpepper Star Exponent, "I consider the theater my home.  It's my natural state, like falling off a log."

In January of 1980, Ray moved out of their Malibu, California beach house. Later that year, Joyce told People magazine that "We fought constantly.  We were like Bogart and Bacall on a lower level.  I would live in terror of what he thought.  If I did a talk show a thousand miles away, I would ask, 'Did I make a fool of myself?'  She said that her "self-esteem and self-confidence had disappeared.   Ray thought she was spoiled, "and he wanted to be waited on hand and foot," she claimed.

In 1979, Janice and Ray appeared together in a segment of The Love Boat entitled "The Scoop" (Season 3, Episode 5, Air Date: October 6, 1979).  In the episode, Ray plays a tabloid reporter and Joyce played a celebrity whom Ray follows because he thinks she may be meeting a secret lover.  There has been speculation that Joyce and Ray were married, but that has never been any evidence or confirmation of that.

Below is a photo Ray Buknenica as Dr. Norman Solomon on the sitcom House Calls (circa 1979-1982).

According to a 2009 Toronto Star interview with Joyce, there are false rumours about the actress circulating on the Internet:

* She never spent her pre-Hollywood years as a contractor and she never painted the garage of Abe Vigoda, of Barney Miller fame).  Joyce denied that she'd even met Vigoda.  "I never painted his house, his garage or anything he has," she told the Toronto Star.

* She never dated Roots star LeVar Burton.  There is a picture of Joyce and Burton from 1980 on the Internet, but that doesn't mean she dated him.

* She is not the niece of TV actress Fay DeWitt.

In the Toronto Star interview, Joyce declined to comment on her drunk driving incident, which had just happened.

Of her years on Three's Company, Joyce stated in 2009, : " I really felt that Three's Company was a gift.  When it ended, I had money in the bank and the luxury to pursue a life that meant something, to learn and discover.  Hollywood can be brutal, inhuman, the opposite of what the theater is and I had little desire to be part of it.  But now, I'm excited to work again and to, at my age, be able to keep working"

* Joyce DeWitt appeared as Janet Wood in a 1979 episode of The Ropers entitled "The Party" (Season 2, Episode 1, Air Date: September 15, 1979).  Her Three's Company co-stars, John Ritter and Suzanne Somers also guess-starred.  In the episode, Stanley Roper decides to throw a surprise party for his wife, Helen.  He asks his former tenants, Jack, Janet and Chrissy to assist him.

* Joyce has done a great deal of charity work for the homeless.  She took part in the Capitol Forum on Hunger and Homelessness and she  co-hosted, with Jeff Bridges, the World Food Day Gala at the Kennedy Center.