Whoa! Keeping up with Joey Lawrence 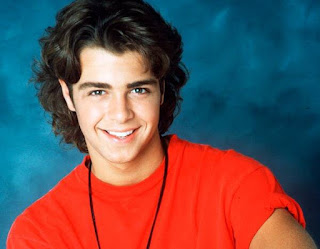 Joey Lawrence is a former teen heartthrob whose heyday was in the 1990s.  He was included in TV Guide's list of "TV's 25 Greatest Teen Idols" (January 23, 2005 issue).  He has been a presence on American television for over 35 years.

Joey was born Joseph Lawrence Mignogna Jr. on April 20, 1976 in Abington, Pennsylvania and raised in nearby Philadelphia.  He is the son of Donna, a personnel manager and former teacher, and Joseph Lawrence Mignogna, an insurance broker,  Joey has two younger brothers, Matthew Lawrence (born February 11, 1980) and Andrew Lawrence (born January 12, 1988), who are also actors.  Joey and his siblings are of Italian and English ethnicity.  When Joey began acting, he changed his surname to "Lawrence," his middle name at birth.  The rest of the family followed suit.

Joey Lawrence began his career as a child star in the 1980s.  He got his start in TV commercials for such products as Cracker Jack, Chips Ahoy!, Rice Krispies and the Smurf video game for the ColecoVision game system.  He also appeared in a Buckle Up Seat Belt public service announcement.

Joey appeared in a 1982 episode of Diff'rent Strokes entitled "Big Brother" (Season 5, Episode 4, Air Date: October 23, 1982).  At the age of five, he performed the song "Give My Regards to Broadway" on The Tonight Show with Johnny Carson.   At the age of six, he moved to Los Angeles and became a regular on the TV comedy Gimme a Break!.  He played adorable moppet Joey Donovan on the series from 1983 to 1987.  His younger brother, Matthew, portrayed Matthew Donovan in 18 episodes of the show, from 1986 to 1987.


At 14, Joey was cast in the NBC sitcom Blossom.  For five seasons, from 1990 to 1995, he played Joey Russo on the series, co-starring with Mayim Bialik, who portrayed his TV sister. The show was a huge hit and Joey shot to fame as a teen idol, appearing on the cover of numerous fan magazines.  While on Blossom. Joey also popularized the catchphrase "Whoa!."  During an appearance on HuffPost Live, he revealed that he first used "whoa" as a joke. "That word was great," he declared.  "It's so weird that word has transcended 20 years."

In 1994, at the age of 18, Joey Lawrence graduated from Abington Friends School. a Quaker-run prep school founded in 1697.  It is located in suburban Jenkintown, Pennsylvania (just north of Philadelphia). That was no small accomplishment since the young actor had spent so much of his life on television sets.  In a People magazine article, he lauded his "wonderful" tutor, Miriam Richards, who "constantly communicated with the school and made me feel like Abington was a major part of my life."  By following AFS's curriculum, Joey was able to remain a student there from kindergarten to graduation.  He later attended the University of Southern California.

From 1995 to 1997, Joey starred in the sitcom Brotherly Love, along with his real life brothers, Matt and Andy Lawrence.  Joey played Joe Roman, who returns to Philadelphia a year after his father's accidental death, to claim his share of the estate - a car customizing business.  He finds himself reunited with his two half brothers, 15-year-old Matt (Matthew Lawrence) and seven-year-old Andy (Andrew Lawrence).

Brotherly Love only ran for two seasons, but it made an impression on millennial viewers who watched reruns of the show on the Disney Channel.  Below is a photo of the three Lawrence Brothers in their Brotherly Love days - Left to Right: Matthew, Andrew and Joey. 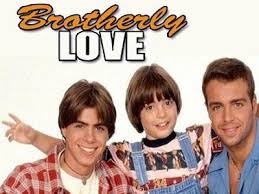 From 2005 to 2006, Joey Lawrence had a recurring role as Brett Mahoney in Half & Half, a comedy about two half-sisters who share the same father, but are very different.  They live in the same apartment building and regularly have disagreements.

In 2006, Joey teamed up with professional ballroom dancer Edyta Sliwinska and appeared on Dancing with the Stars.  The pair finished third in the competition.  Joey told People magazine at the time that after the gruelling dance rehearsals, "I wake up and the balls of my feet are on fire."

In 2007, Joey portrayed a character named Clay Dobson co-starred in three episodes of the crime series CSI:NY.  From 2010 to 2015, Joey and Melissa Joan Hart starred in the family sitcom Melissa & Joey.  Melissa played Melanie "Mel" Burke, a local politician and Joey portrayed Joseph "Joe" Longo, the man whom Mel hires to be her family's nanny.  After four seasons and more than 100 episodes, ABC cancelled the popular series. 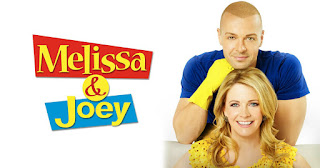 Since 2017, Joey has had a recurring role on Hawaii Five-0 as escaped criminal Aaron Wright.

Joey Lawrence has been married twice.  He wed Michelle Vella in 2002.  They divorced in 2005.  On July 3, 2005 Joey married Chandie Yawn-Nelson, whom he first met during a 1993 vacation at Disney World in Florida when they were teenagers.  The duo set up an ice cream date back then, but since they were only teens, they went their separate ways.  Joey told People magazine that, "Being the cheesy romantic that I was, I said 'Hey look, there's the Disney wedding chapel!  Maybe we'll get married there one day.'  Long story short, we did!"  Their 2005 nuptials took place at Disney World.

The couple have two children, a son named Charleston "Charli" Lawrence (born May 10, 2006) and a daughter, Liberty Grace Lawrence (born March 4, 2010). " Liberty" is a name that Joey has always liked and "Grace" is after his grandmother.

In recent years, Joey Lawrence has fallen on hard times.  He and his family have gone through some dire financial circumstances.  In March of 2018, The Blast reported that Joey and his wife Chandie had filed for bankruptcy.  The Chapter 7 bankruptcy case was reportedly settled on April 6, 2018.  According to court documents obtained by US Weekly, the couple sold "items of clothing, accessories and furniture prior to bankruptcy."
EDITOR'S UPDATE: On July 17, 2020, Fox News reported that Joey and his wife, Chandie, had separated after almost 15 years of marriage.  According to TMZ, Joey filed for divorce at the Los Angeles Superior Court.

* In May of 1994, Joey Lawrence was designated as one of People magazine's "Most Beautiful People in the World."

* Joey is a musician.  In 1993, a song called "Nothin' My Love Can't Fix," from his eponymous debut album, reached number 19 in the Billboard Hot 100 and number 13 in the UK Singles Chart.  In 2017, Joey and his two brothers, Matt and Andy, formed a band called Still Three.  They released a single called "Lose Myself." 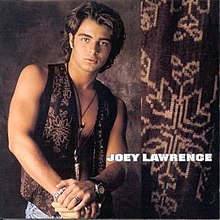 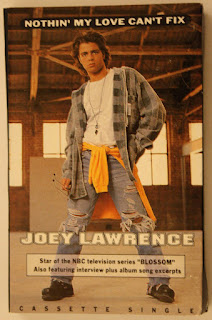 * Joey shaved off his thick, long locks to play a police officer in the 2006 horror film Rest Stop.  Soon after, he appeared on Dancing with the Star and its producers liked the Mr. Clean look.  "People either love it or" he told People magazine in 2006.  "But I like it, so who cares."

* Joey made a cameo appearance in a 2006 advertisement for Ice Breakers gum, featuring sisters Hillary and Haylie Duff.