A Letter to Alex Trebek 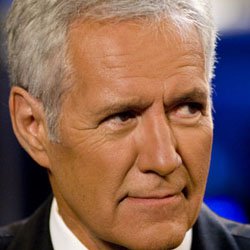 Jeopardy! is my favourite television game show.  It is challenging, intelligent and fun.  I have to admit, however, that I would not make a good contestant as I would be much too slow on the buzzer.  So, I think I'll just stick to watching the show at at home.  I'll leave the official competition to the Ken Jennings of this world.

I am not only a fan of Jeopardy!.  I am also your fan, Alex Trebek.  (We are both Canadian, both from Ontario,).  Last March, I was saddened when you announced that you had been diagnosed with stage 4 pancreatic cancer.  You noted that your prognosis was not good but that you would fight the cancer aggressively in hopes of beating the odds.

In the face of such devastating news, you have comported yourself with the utmost dignity and grace.  I greatly admire your courage and I believe you have been an inspiration to others who suffer from the same terrible affliction.  Since your diagnosis, you have simply carried on with your work. You have continued to host Jeopardy!, as you have done for over 35 year, since 1984.

In September of this year, you resumed chemotherapy. In a recent telephone interview with USA Today, you said you were feeling okay and you stated that "some days are better than others."  You are still experiencing the effects of chemotherapy, which you described as wearing on you.  Jeopardy's production schedule has had to be changed in order to accommodate your illness.  Still, you are scheduled to host the Jeopardy! Greatest of All Time tournament, a primetime special event, featuring the shows three biggest winners - James Holzhauer, Ken Jennings and Brad Rutter.  Two matches (four games total) are slated to be taped in early December.  The tournament will air on ABC in January of 2020.  Fans will really be looking forward to that and you know that all of us wish you well.

Alex, you told USA Today that it's "pure adrenaline" that keeps you going.  I'm sure the outpouring of support from your family, friends and fans has especially gratifying to you during this difficult time.  I have written this letter to add to that support. 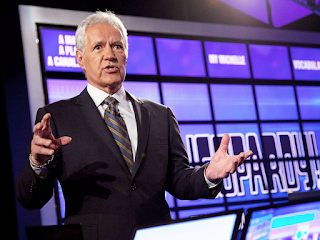 You are in my thoughts and prayers.


- Joanne
EDITOR'S UPDATE: Alex Trebek died of pancreatic cancer at his home in Los Angeles on November 8, 2020.  He was 80 years old at the time of his passing.
Posted by Joanne at 1:33 PM