Whatever happened to Jimmie (J..J.) Walker? 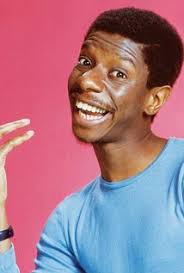 He symbolized the '70s American dream of success - the former kid from the ghetto who rose to wisecracking TV superstardom.  While in his element as the broadly strutting. gleamy-toothed J.J. Evans of the popular urban-styled sitcom Good Times (1974), Jimmie Walker lived the extremely good life.

Jimme Walker was born James Carter Walker Jr. on June 25, 1947 in Brooklyn, New York, but he was raised in The Bronx.  He attended Theodore Roosevelt High School in New York City and he has roots in radio,  Due to a federal program known as SEEK ("Search for Education, Evaluation and Knowledge"), he was able to continue his studies and enter the field of radio engineering with WRVR, the radio station of the Riverside Church in Morningside Heights, Manhattan.

Jimmie started his career doing stand-up comedy.  He performed at the African Room. a calypso/Caribbean themed New York City club, where he was mentored by comedian David Brenner.  Early in his career, he made TV appearances on talk shows hosted by Joe Franklin and Jack Paar.  His eventual goal was to appear on The Tonight Show. . .Starring Johnny Carson.  According to the Internet Movie Database (IMDb.com), he finally appeared on Carson's show in 1988.

Jimmie still revers the late night talk show host.  In 2012, He told the Norfolk Daily News that the Carson influence is still there.  He said, "I still write material like I'm getting ready to do The Tonight Show.  I hope Johnny likes it."  Jimmie was the recipient of the 2012 Johnny Carson Comedy Legend Award at the Great American Comedy Festival at the Johnny Carson Theatre in Norfolk, Nebraska.

Jimmie is best known for his portrayal of James Evans Jr. ("J.J") on the Norman Lear sitcom Good Times.  Good Times was a spin-off  of Maude, which in turn was a spin-off of All in the Family.  The series ran on CBS for six seasons, from 1974 to 1979, with a total of 133 episodes.  Good Times attracted attention because it tackled such hot potato topics as racism, venereal disease, urban poverty and busing.

Jimmie Walker was beanpole thin and 26 years old when he first played J.J. Evans in 1974.  J.J. was the eldest son of a close-knit African-American family struggling to succeed in a Chicago ghetto.  He was only eight years younger than his television father, James Evans, played by John Amos.  He didn't have much acting experience either..  According to Jimmie, "Every month during Good Times, Norman Lear would say, 'I beg of you, go get some acting lessons.  It would really help you,' and I would say, 'I like what I do."  Then, in the second year, I hate to say it, the laughs got so big, it was bigger than Norman Lear."

Jimmie's catchphrase on Good Times was "Dy-no-mite!"  He credits the shows director/producer John Rich with insisting that J.J. use the expression on every episode.  It really caught on with audiences.  J.J. was often seen wearing his trademark hat, a blue demim bucket hat.  Below is a photo of him wearing his signature hat. 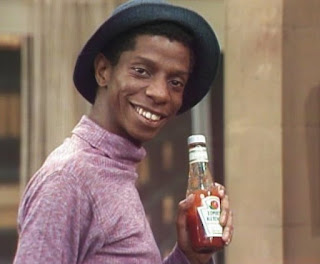 Below is a photo of the Good Times cast in 1974: L to R: Ralph Carter, BernNadette Stanis, Jimmie Walker, Esther Rolle and John Amos. 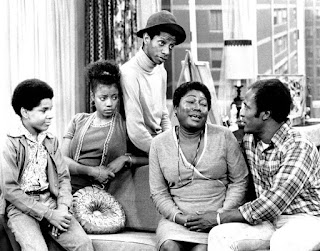 In 2018, Jimmie Walker sat down for a revealing three-hour interview with the Television Academy Foundation.  He stated that the cast of Good Times was never close in real life.  According to Jimmie, he never spoke to his TV mother and father (Esther Rolle and John Amos)  when they left the set.  "I can honestly say, I don't remember ever speaking a word to Esther the whole time she was there."  As for John Amos, he said, "We talk more now, bit very, very little.  We were never friends, never talked."

In 1976, John Amos was fired from Good Times and his character was killed off.  In an interview with Sway in the Morning, John claimed that he was let go because he tried to make the show more authentic, which didn't please its producers.  After leaving Good Times, John had memorable roles on the original Roots miniseries and in Coming to America, the 1988 film starring Eddie Murphy.


After Good Times went off the air in 1979, Jimmie returned to stand-up comedy.  He found himself typecast, but he resigned himself to the situation.  In his Television Academy interview, he said, "The reality of my life is that I'm always gonna be J.J.  You better get over it.  That's just the way it goes."

On June 27, 2012, Jimmie appeared on The Wendy Williams Show.  He revealed that he'd never been married and he'd never fathered any children.  He said, however, that he's had many girlfriends.  In 2018, Jimmie was linked to controversial right-wing media pundit Ann Coulter.  There has been speculation about a romance between the two ever since Norman Lear said the following about Jimmie in an interview with Entertainment Weekly: "I love him.  But I'll tell you something about him that'll astound you.  He dates Ann Coulter."  Coulter, for her part, has denied the rumour.  On Twitter, she wrote: "Best of friends, love him, no romance."

* Jimmie Walker was named Time Magazine's "Comedian of the Decade" for the 1970s.

* Esther Rolle, who portrayed Florida Evans on Good Times, passed away on November 17, 1998 from complications from diabetes.  She was 78 years old at the time of her death.  Esther left the show after the fourth season because she did not believe that J.J. was a good role model for young blacks.  She returned for the sixth and final season after producers assured her that they would make J.J. more respectable.

Below is a 1974 photo of Esther on the set of Good Times. 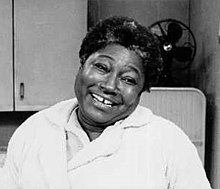 * Jimmie's used his "Dy-no-mite!" catchphrase in a 1975 TV commercial for a new Panasonic line of portable cassette and 8-track tape players. 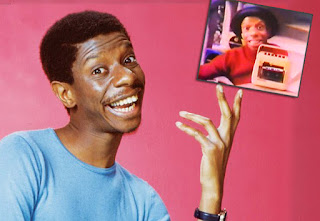 * Jimmie appeared on TV game shows such as 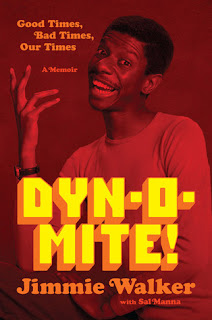 * Jimmie's politics are decidedly conservative.  He did not vote former U.S. President Barack Obama and was highly critical of him in interviews with Jay Leno and Bill O'Reilly.  In a Fox News interview with O'Reilly, Jimmy stated, "Barack Obama is more like a Tony Roberts type of guy.  You feel real good and happy and everything and then you go home and there's a foreclosure sign on your door."

In August of 2017, Jimmie publicly pronounced his support for President Donald Trump, declaring that he was "for probably 90 per cent of things he does."

* In a 2015 CNN interview with Carol Costello, Jimmie said that the black community was not too fond of Good Times, fearing that the show helped buttress negative stereotypes of African-Americans.  Because of that, Jimmie argued, "you'll never see a poor black family again on TV."  "Every black family now has to be upper middle-class," he sad, citing The Cosby Show and black-ish as examples.