Well fans, The Young and the Restless has run out of new episodes to air during this horrific pandemic.  We have no idea when the show will be able to resume production.  However, the safety of the actors has to be the primary consideration.  Two members of the cast have already tested positive for the COVID-19  virus - Greg Rikaart (Kevin Fisher) and Jordi Vilasuso (Rey Rosales).  So, for the time being, we viewers will have to be satisfied with watching throwback episodes from yesteryear.

Y&R will be launching "theme weeks."  The first one will focus on Katherine Chancellor (Jeanne Cooper) and is called "Katherine the Great."  Some of the Genoa City matriarch's most classic episodes will  be shown, most dating back to 1990s. The episodes will feature other Y&R legends such as Eric Braeden (Victor), Melody Thomas Scott (Nikki), Peter Bergman (Jack) and other.  The Katherine Chancellor began yesterday on Global-TV in Canada.  It will commence on Monday, April 27th on CBS.

Now, to the current Y&R storylines: It was quite amusing to hear Adam lecture Victoria.  He lectured her about how easy it is to delude oneself and act superior.  What a hypocrite!  Talk about the pot calling the kettle black!  Adam is the one who is smug and arrogant.  I'm glad his attempted takeover of Newman Enterprises has backfired on him, although I don't think he will every stop scheming against Victor and the other Newmans.

It's interesting that Adam still doesn't know about Sharon's cancer.  There must be a reason for that.  It will probably tie into the storyline some way.  We won't know for a while, though, because Y&R's storylines will be left hanging until new episodes are finally produced.

It seems likely that Victor is telling the truth about what happened in Kansas all those years ago.  It appears that an 11-year-old Adam killed loan shark A.J. Montalvo in order to protect his mother, Hope.  Adam has apparently blocked the traumatic event out of his mind.  However, I wonder if there's more to the story, some kind of a twist.

I enjoyed watching the baby shower for Chloe.  It was light and breezy.  After Sharon's cancer battle and Dina's Alzheimer, we needed some relief from all the despair.  We certainly don't need any more depressing storylines during a global pandemic.  It was also good to see Lauren and Michael and Esther because they aren't involved in any major storylines and we seldom see them anymore.

So, Chloe asked Chelsea to be her baby's godmother.  The child will have a con woman for a godmother and shady parents.  Who will be the baby's godfather?  Adam?  Again, since production of Y&R has been halted indefinitely, we will have to wait to watch the episodes about the birth of Chloe's baby.

Kyle Abbott has fired Theo Vanderway from his job at Jabot.  However, Theo is an opportunist and he's a survivor.  He'll find some other employment.  He may even land a job at Chancellor's new media division, headed by Billy Abbott and Lily Winters.  I don't think Theo has given up on getting a piece of the Abbott pie either.  He is still Dina's grandson and will probably be left something in her will.

According to an online spoiler, Snowflake ends her relationship with  Kyle until he settles things with Lola, with whom he is still legally married.  That means that Kyle will likely find himself competing with Theo for Lola's affections.  We will have to wait for new episodes to see how that plays out. 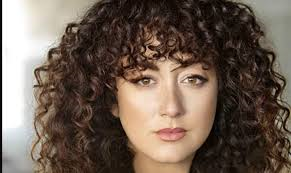 Maria DiDomenico has been portraying journalist Alyssa Montalvo, Adam's childhood friend.  Maria hails from New York and she is of Dominican heritage. Maria was a student at the People's Improv Theater in New York and she holds a B.A. in Performing Arts from the State University of New York (SUNY) in New Paltz, New York.

In 2017, Maria played the role of Fran on Days of our Lives.  She has also appeared on ABC's Mistresses, Law & Order: Special Vicrims Unit (SVU) and Tru TV's comedy series Those Who Can't.

It appears that Maria's stay on Y&R was only temporary.  She seems to have left town and its unlikely that we'll see her again when the show resumes production with new episodes.

Y&R's Elizabeth Hendrickson (Chloe) appeared on Entertainment Tonight from her home in an interview with host Matt Cohen (Dr. Griffin Monroe, General Hospital).  She introduced her new baby, Josephine James, and revealed that they call the child "JJ" or JoJo.  She also provided viewers with a tour of the nursery and a glimpse of her daughter's crib and baby clothes.

As Y&R fans know, Elizabeth's pregnancy was written into the show.  In her interview. Elizabeth discussed the scary aspect of appearing  in Chloe's baby shower scenes with co-star Greg Rikaart, who later tested positive for COVID-19.  The scenes were filmed prior to her giving birth.

There are hours for soaps to fill during this pandemic.  Y&R has chosen to launch "theme weeks," beginning with episodes featuring Katherine Chancellor.  Since I watch the show on Global TV, I've already viewed Monday's CBS episode, the first of the Mrs. Chancellor's classic.  The episode was introduced by Doug Davidson (Paul Williams), who plays a prominent role in it.  It was so good to see Doug again.  Frankly, I was surprised to see him since he has not appeared on any of the current episodes for a long time.

Jeanne Cooper plays two roles in the episode - Mrs. Chancellor and her look-alike, Marge, a waitress at Joe's Diner.  Marge and her accomplices try to kidnap Mrs. Chancellor, take over her life and gain control of her enormous wealth.  It's interesting to note that Marge's henchman is portrayed by Morey Amsterdam (Buddy on the old Dick Van Dyke Show.  The episode also features Heather Tom as Victoria and Tricia Cast as Nina Webster.  Jack and Victor are still at each other's throats and a young Cricket (Lauralee Bell) has quite a crush on rock star Danny Romalotti, played by Michael Damian.  It would be fun to see an an episode with one of Danny's concerts in which Lauren (Tracey E. Bregman) sings with him.

It is uncertain when Y&R will resume production, so the powers-that-be are going to have to be very creative.  They can only have "theme" weeks" for so long.  They are eventually going to have to come up with new ideas.  So far, episodes prior to the 1990s have not been aired.  Some Y&R fans, especially longtime viewers, would really enjoy episodes from the 1970s and 1980s.  Others could do without those episodes.  They have very  little interest in them and they aren't familiar with many of the characters.  The earliest episodes are only a half-hour, so two episodes would have to be shown at time.

So fans, what do you think Y&R should do during this pandemic?  Respond to the poll below and let me know.  If you have more detailed ideas about what you would like the show to do during this time, please email me and I will be more than pleased to publish your letters.


What would you like to see on Y&R during the pandemic?
Created with Poll Maker


That's all for now.  Stay safe during this pandemic and don't forget that the next edition of Y&R Report will appear in this space on May 9, 2020.