Hi fans,
The November sweeps are upon us, so I'm expecting some excitement and drama on Y&R.  I can't wait to watch the wedding of Abby and Chase.  It should be so much fun.  I had hoped  there would be a Christmas wedding to brighten up this COVID Yuletide.  However, the nuptials will take place before the end of this month, probably due to the November sweeps.  It will pull in some huge ratings.
I'm looking forward to Tricia Cast's appearance as Chance's mother, Nina, on the Monday, November 30th show on CBS (Friday, November 27 on Global TV).  That means the wedding will take place then.  We've already seen her on a cell phone congratulating the happy couple.  I don't know if Lauralee Bell will make an appearance as Christine "Cricket" Williams along with with her friend Nina.  I have not seen any indication that she will.  Maybe she'll show up at the wedding with hubbly Paul.
It's good to see Doug Davidson back on the scene again as "Clueless" Paul Williams.  Once again, Clueless and his sidekick, Rey Rosales, have it wrong.  Billy Boy Abbott did not try to shoot Adam.  That's much too obvious.  Billy, of course, will go on trial for attempted murder and he will be defended by Amanda.  Michael Baldwin, as District Attorney, will pull all the stops to prosecute Billy and make him look bad.  Still, I am quite confident that he is not the guilty party.
I've heard a theory about who really tried to kill Adam Newman and it makes perfect sense to me.  The theory is that the journalist, Alyssa Montalvo (Maria DiDomenico), is the real perpetrator of the crime.  She was Adam's childhood friend.  He lied to her in order to lure her to Genoa City.  She then discovered that he killed her father, A.J. Montalvo, at his mother's farm in Kansas when he was 11 years old.  She despises him and has a motive for seeking revenge against him.  Have you noticed that she is in the background right now?  She hasn't been seen on screen for a while.  My guess is that the writers don't want you to be reminded of her as a suspect.  They want the spotlight to be on Billy Boy.
There is going to be an all-out war between Summer Newman and Sally Spectra.  Both Sally and Snowflake are troublemakers.  However, Sally is ruthlessly ambitious.  She will do her best to remove any obstacles to stand in the way of her goals.  At the moment, Summer is standing in the way of her career ambitions.  She will probably also interfere with Sally's romantic desires.  It will not be surprising if Sally decides to pursue Kyle Abbott.  After all Kyle can satisfy both Sally's financial and romantic ambitions.
Summer can be a tough cookie and she is manipulative.  After all, she is Phyllis's daughter.  However, I think Summer has more of a heart than Sally.  As a snowflake, will probably melt in the end.  Sally's heart seems to be stone cold.  The more I see Sally and Theo Vanderway together, the more I believe they would make a perfect match.  They have a certain chemistry and they have so much in common. They really deserve each other.  It is unlikely to happen, though, because Tyler Johnson, the actor who portrays Theo, has announced that he is leaving the show.  I suppose he'll just leave town when he loses his lawsuits against the Abbotts.
I still don't understand why Sharon is considered a therapist and how she was considered capable of providing professional opinion  on whether Adam should be forced by law to receive psychiatric care.
She even used the phrase, "In my professional opinion . . ."  By the way, who are Dr. Sharon's other patients.  I know soaps aren't realistic, but the writers should have some respect for the intelligence of viewers.
Speaking of Sharon, now that she has overcome her cancer, she has more troubles facing her.  Faith's underage drinking is not going to stop anytime soon, especially as long as her friend Jordan is in the picture.  There is also another huge potential source of conflict for Sharon and her daughter.  Sooner or later, Adam (Mark Grossman) and Sharon (Sharon Case) will get together.  They can't stay away from each other.  In addition, Sharon and Mark are a real life couple, so they won't have to social distance.
Faith detests Adam and will never accept her mother with him.  Alyvia Alyn Lind is doing a superb job of portraying a confused and troubled Faith.  I expect her to be nominated for a Daytime Emmy for best young performer.
CAST NEWS
Donny Boaz (Chance) tests positive for COVID 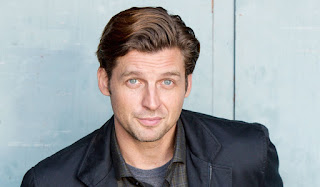 A few weeks ago, Donny Boaz, who plays Philip "Chance" Chancellor IV, tested positive for COVID-19.  H revealed his diagnosis on Instagram.  He wrote that hehe did not have any symptoms, but is following guidelines.  He quarantined at home, so he won't be seen on Y&R for a short time.  However, he has returned to work and will be back on screen soon.
Donny's positive COVID test came just as his character, Chance, was involved in a big storyline, but Y&R really lucked out.  Melissa Ordway's (Abby Newman) real life husband was able to fill in as an emergency replacement for Donny.  Melissa's spouse, Justin Gaston, will temporarily take over the role of Chance (He appeared on the Friday, November 20th episode on Global TV).  It just so happens that Justin once played the role of Ben Weston on Days of our Lives.  It's also quite convenient that the couple will not have to social distance during filming, so they can do love scenes, especially since there will be a wedding and honeymoon coming up for Abby and Chance.
Y&R REPORT READERS' POLL
As we all know, Chance was shot, but he wasn't the intended victim.  Someone tried to kill Adam.  Chance took the bullet instead.  So fans, who tried to shoot Adam.  Let me know what you think.  Respond to the poll below and let me know.
Who tried to shoot Adam?
NOTE TO READERS
If you have any comments on Y&R, please email them to me with "Viewer Forum" in the subject line. I will be happy to publish your comments and reply to them  You do not have to use your real name.
My email address:  jmadden16@yahoo.ca
That's all for now.  Please remember hat the next edition of Y&R Report will appear in this space on Saturday, December 5, 2020.
To my American friends, Happy Thanksgiving.
Take care and be safe,
- Joanne
Posted by Joanne at 2:42 PM