Whatever happened to Mike Lookinland of The Brady Bunch? 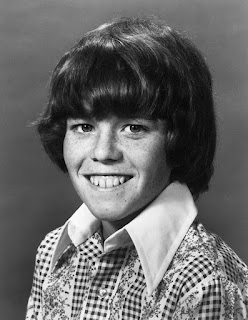 The problem for me was, I lived my childhood in my 20s.  You should really live your childhood when you're a child, because if you do it when you're 26, it can be dangerous.

- Mike Lookinland, video clip from "Oprah Where are they now?"

Mike Lookinland, who played Bobby Brady, the youngest Brady son on The Brady Bunch, has kept a lower profile than the actors who portrayed the other Brady children.  He fled the Hollywood scene and eventually became a successful businessman.

Michael Paul Lookinland was born to a Mormon family in Mount Pleasant, Utah on December 19, 1960.  Mike was the second of the three children of  Paul Lookinland and his wife, Karen.  Mike had two siblings, an older sister named Theresa and a younger brother, Todd.  His father, Paul, was a junior high school principal in Carson, California.

By the age of seven, Mike was acting n television commercials for products such as Cheerios cereal, toys and Band-Aid bandages.  He was actually offered two sitcom roles - Eddie Corbitt on The Courtship of Eddie's Father and Bobby Brady on The Brady Bunch.  His parents chose the The Brady Bunch, and the part of Eddie was given to Brandon Cruz.  Mike's parents believed that it was better for their son to be around children his own age than to be the only child in an adult cast.

Mike was 9 years old when he was cast as Robert "Bobby" Brady.  The Brady Bunch was created by Sherwood Schwartz, who also created Gilligan's Island.  The series aired for five seasons, from 1969 until 1974 on the ABC network but did not attain great popularity until it went into syndication.

Mike Lookinland appeared in all 117 episodes of The Brady Bunch.  When he was cast as Bobby, Mike was told that he would have to dye his hair.  Mike's hair was naturally sandy and wavy.  HIs strawberry blond locks were darkened and straightened in order to match the hair of his TV brothers, Barry Williams, (Greg Brady) and Christopher Knight (Peter Brady}.  During the final two seasons of The Brady Bunch, however, Mike's natural hair colour was allowed to be shown.

In a 2019 interview with the New York Post, Mike stated the following: :"It was very strange for a nine-year old boy to go to school one morning with red hair then show up on Monday with jet-black hair."  Although the series was about a blended family consisting of a blond mother with three blond daughter and a dark-haired dad with three dark-haired sons, Mike claims it was never presented to him that way.  As a child, he disliked dying his hair and found it weird.

In the 1970s, Mike Lookinland attended Chadwick School, an independent school on the Palos Verdes Peninsula in Los Angeles County, California.  He graduated from Chadwick in 1978.  During his time on The Brady Bunch, Mike studied at Hollywood Professional School along with his Brady Bunch  siblings Maureen McCormick (Marcia Brady), Christopher Knight and Susan Olsen (Cindy Brady). 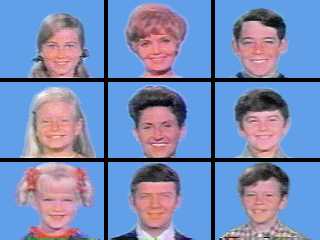 Mike remained with The Brady Bunch until the series ended in 1974.  Soon after its cancellation, he appeared as Phillip Albright in the 1974 disaster film The Towering Inferno. The Towering Inferno was a blockbuster hit with a stellar ensemble cast including, Paul Newman, Steve McQueen, Faye Dunaway and Jennifer Jones, Fred Astaore. Robert Vaughn, Robert Wagner, Richard Chamberlain, Susan Blakely and yes, O.J. Simpson.

After The Tower Inferno, 20th Century Fox wanted to cast Mike Lookinland in a new TV series called Swiss Family Robinson. Mike turned down the offer because he and his schoolmates had planned to go on a ski trip.  He told the producer that he hadn't had a vacation in six years and that he didn't want to do the show.  He soon learned that you "don't turn down work in Hollywood if you want to get work in Hollywood."  According to Mike, nobody called him again after that.

After graduating from high school, 17-year-old Mike decided to leave Hollywood and move to Salt Lake City to attend the University of Utah.  He met his future wife while they were both attending the university and he put down roots in Utah.  He dropped out of college in order to pursue a career as a production assistant and camera operator.

In a 2019 interview with Desert News, Mike said, "I wanted to get out of L.A., get away from agents and managers.  And just to be a kid in the mountains."  It was an attempt on Mike's part to live his life outside of the public eye.

Despite Mike's escape from Hollywood, everything did not go smoothly for him,  Like many a child star, he had a difficult struggle with alcoholism.  After The Brady Bunch ended, he began drinking and became addicted.  "I loved alcohol," he said in a video clip from "Oprah Where are they now?'"  "First time I had a drink, oh boy, I thought it was the greatest thing in the world."  Everything came to a head on the evening of November 9, 1997.  Mike was leaving the set of Promised Land in St. George, Utah, where he was employed as an assistant cameraman.  As he drove along Utah State Route 18, he approached a curve and drifted onto the left shoulder.. While attempting to steer back onto the pavement, he rolled off the right side of the road.

Mike sustained cuts and bruises as a result of the accident.  It turned out that his blood alcohol content was over three times Utah's legal limit.  He was treated in hospital and then booked into Washington County Jail, but was released on bail.  In December pf 1997, Mike completed a court-ordered rehabilitation program.  On May 27, 1998, he was sentenced to 24 hours of community service and fined $1,500.  The drunk driving incident was a wake up call for Mike and he sobered up.  "When it became clear that the choice was between living or dying, then it became a simple choice for me," he stated in the Oprah video.

Mike is a "Deadhead," a huge fan of the band the Grateful Dead.  He says his interest in the group began the day before New Year's in 1978.  Since that time, he has attended over 100 Grateful Dead concerts and shows. 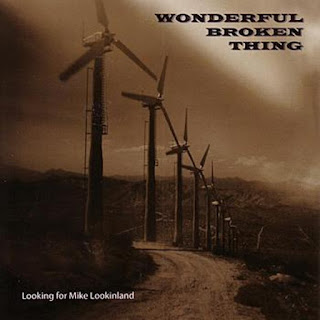 Mike eventually left the entertainment business behind.  After working in film production  for 20 years, he decided to change course.  One day, his wife, Kelly, brought home a library book that caught his attention.  The book's title was How to Make Concrete Countertops.  Mike made up his mind to do just that.  He told his wife that he intended to quit his job and make concrete countertops for a living.

Mike Lookinland now operates a business in Salt Lake City that produces decorative concrete  He is satisfied with the artistic and creative aspect of  designing concrete countertops.  The former child star enjoys living in Utah and says he hasn't even thought about gong anywhere else.  He is impressed by the quality of life in the state.

* Through the years, Mike Lookinland has participated in a number of Brady Bunch reunion shows and interviews.  He appeared on the The Brady Bunch Meets ABC Saturday Superstars (1972 TV movie), Brady Bunch Variety Hour (1976-770, The Brady Girls Get Married (1981 TV movie), A Very Brady Christmas (1988 TV movie) and The Bradys (1990 TV series).  Most recently, he took part in the 2019 HGTV television series A Very Brady Renovation.

In A Very Brady Christmas and The Bradys, Mike's character, Bobby Brady, was seen in a wheelchair, the result of an auto racing accident.

MHe also provided the voice for Bobby Brady in the animated series The Brady Kids (1972-73) in which the Brady children form a pop group.

* Mike reprised his role as Bobby Brady for a 1989 episode of the television series Day by Day, a comedy about a married couple who give up their professional career in order to run a day care centre at home.  The episode was called "A Very Brady Episode" (Season 2, Episode 11, Air Date: February 5, 1989).

* Mike's younger brother, Todd Lookinland, appeared in a 1974 episode of The Brady Bunch which served as a pilot for a new spin-off series called Kelly's Kids.  The series, about a couple with three sons, one black, one white and one Asian, was never bought.  he Brady Bunch episode was also entitled "Kelly's Kids," (Season 5, Episode 14, Air Date: January 4, 1974).
* Mike's son, Joe Lookinland, is known for his role in the 2002 film Everwood.  Joe also appeared in the 2006 film Unaccompanied Minors. Mike's other son, Scott Lookinland, reprised his father's role as Bobby Brady in the 2000 TV movie Growing Up Brady.
SOURCES: Outsier.com, "'The Brady Bunch': Why Mike Lookinland Said His Move to Utah at Age 17 Was to 'Run Away'," by Keeli Parkey, July 12, 2021; Outsier.com, "Why Bobby Actor Mike Lookinland Said ' You Don't Turn Down Work in Hollywood'," by Joe Rutland, June 22, 2021; Amomama.com, "'The Brady Bunch Mike Lookinland Struggled with Addiction after the Show but now happily married with 2 Kids," by Olyin Balogun, September 5, 2021; Wickipedia; Internet Movie Database (IMDb)