Have you noticed that Faith Newman (Reylynn Carter) and Moses Winters (Jacob Aaron Gaines) haven't had much screen time lately?  I know that the focus has been on Victoria and Ashland's wedding and on the Abby-Chance storyline.  Still, those two young lovebirds have really been in the background.  With Noah back in town, you'd think that Faith would be in scenes with the brother she hasn't seen for a long time.

Speaking of Noah, I can't quite figure what direction the writers are taking him.  All we know is that someone in London broke his heart.  He seems to be hanging out a lot with Tessa and Mariah.  I thought he might get romantically involved with Tessa.  However, it appears that the writers seemed to have backed away from that, at least for the time being.  It might still happen if Tessa loses patience with Mariah's obsession with baby Dominic.  Tessa is not on the same page with her on that.

Mariah is way out  of line where Dominic is concerned.  As much as she feels a connection to the child, she has to face the reality that Abby is his mother.  She is doing herself no favours by hovering over him.  If Chance is declared dead, I wouldn't be surprised if she takes legal action to gain custody of her "Bowie."  Tess will not be on board with that.

There weren't any Halloween parties or costumes on Y&R again this year.  I was disappointed about that, but there must be a reason.  It might have something to do with COVID.

I quite enjoyed watching that heart-to heart talk that Nick had with Victoria.  They really opened up to each other as siblings.  It was rather touching.

If you're not convinced that Chance is really dead, you are definitely on the right track,  Chance is returning to Genoa City, but he wont be played by Donny Boaz (In the CAST NEWS section of this Y&R Report, you will find a brief biography of the new Chance.  That's right.  There will finally be a new Chance and it's about time).

What will Chance's return mean for the storyline?  What will await him when he finally comes home?  Will Abby give up all hope of seeing him alive again?  Maybe a body will be wrongly identified as Chance's, so she will go on with her life, only to discover that her husband is still alive.. There is going to be quite a showdown, legally and emotionally, over custody of that poor baby Dominic.  Both Devon and Mariah could eventually seek custody of him since they  are booth extremely attached to the child.

Abby doesn't seem to be able to cope with looking after Dominic and dealing with her grief over Chance.  She ended up at Devon's doorstep asking for help.  Now Devon is looking after the baby and Abby has taken off somewhere.  My guess is that she's headed tp Spain to look for Chance.  She still has hope that he's still alive.  She's right, too, but this is a soap opera.  The question is this: If Abby does go to Spain, will she find him or will he return later?

So far. Amanda seems very supportive of Devon's connection to Dominic and Abby.  I still have a problem with Devon and Amanda.  Wouldn't it feel weird having a relationship with someone who looks exactly like your dead spouse.  Amanda may be a dead ringer for her identical twin but her personality is quite different from Hillary's.  I think the bond between Devon and Hilary was much stronger.

Is it finally over between Phyllis and Nick?  I hope so.  Those two are not in sync.  Their relationship has run its course.  Phyllis will never accept Nick's ties to his family and Nick will always be a Newman.  That will never change.  Nick needs someone who has more in common with him and accepts his family situation.  I think he is best suited to Sharon.  Notice how often he has been confiding in her lately.  Their son, Noah, even commented that he didn't think Nick had ever really gotten over Sharon.  Having said that, I don't think the time is right for a Nick and Sharon reunion yet.  There are too many complications, such as Sharon's marriage to Rey and her fixation on Adam.  It may happen someday, when she inevitably breaks up with Rey.

Here's another thing I've thought about.  Sally Spectra might go after Nick, just for revenge against Phyllis and to make his brother Adam jealous.  I wouldn't put it past Sally.  I just don't know if Nick would be interested in hooking up with her.  However, Nicholas usually shows poor judgement where women are concerned.

Sally should take Jack's sage advice.  He told her to o stop complaining and to stop acting as if everyone were against her.  He was spot-on with those words of wisdom.   She's got to put an end to her "Poor Sally" attitude.

Some Y&R fans felt that Ashland Locke was faking his death.  I think we can put that theory to rest.  The media mogul has clearly experienced pain with no one else was around.  Why would he pretend to be dying in that situation?

Once again, Victor Newman has won.  As he would  say, he has crushed Billy Boy.  He and Adam are threatening to bring down Chancellor Communications.  They were able to get Jesse Gaines on their side and they completely fooled Billy Abbott.  I've got to believe that Victoria and Ashland are in on Victor and Adam's scheme too.  Victor wouldn't do anything to hurt his princess.

Billy will be facing a lot of music.  Lily has just about had enough of his shenanigans.  Not only that, but Billy's mother, Jill (Jess Walton), will be coming home for a visit.  According to an online spoiler, "she will make some stunning business decisions."  Jill's  decisions will probably involve ChancComm and I doubt Billy will be pleased.

Here is an email I received from Y&R fan CC in Etobicoke, Ontario.

My comment for this week is related to how poorly baby Dominic is portrayed.  Wrapped in the same blue-striped swaddling blanket day after day, this cannot be the long-awaited, much-adored son and grandson of multi-millionaire parents and grandparents.

They should consider the impact of this sad visual on the amount of empathy the audience can muster up for Abby.

There must be a life-like baby doll hidden somewhere in the prop room that could be used!

Major gaffe by the powers that be!

You are absolutely right, CC.  Surely Y&R can do better than that.  It's what you'd expect from an amateur production.  Do they think that viewers haven't noticed that Dominic is just a fake blanket baby?  What a joke!  The baby's crying is so phony too.  How shoddy!  The only valid excuse for not using a real baby is COVID regulations.  If, that's the case, they could use a life-like doll, as you suggest.  At the very least, they could change poor Dominic's blanket.  Sooner of later, they are going to have to get rid of that blue-striped one.  This certainly is a major gaffe by the powers that be.  I wouldn't be surprised if at the end of a scene, the actors laugh and toss around that ridiculous blanket baby. 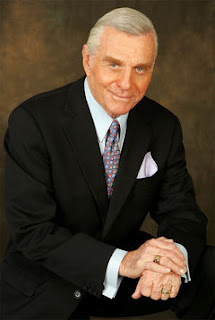 Jerry Douglas, who portrayed patriarch John Abbott on The Young and the Restless, passed away on November 9th after a brief illness.  He was 88 years old.  Jerry joined the cast of Y&R in 1982.  The actor played the wealthy founder of Jabot Cosmetics until his character was killed off in 2006.  He remained with the show about a decade longer, appearing from time to time as the ghost of John Abbott until 2016.  As a ghost, he guided his son Jack, offering Jack much advice.

In addition to his John Abbott role, the veteran actor appeared in films such as JFK and Mommie Dearest.  He also had television guest roles on Melrose Place and Arrested Development.  Jerry is survived by his wife of 37 years, Kym, sons Jod and Hunter, and daughter Avra.  He also leaves two grandchildren.

A new actor will be playing Chance

Y&R has confirmed that Conner Floyd will be taking over the role of Philip Chancellor 1V, better known as Chance).  Conner is a newcomer to soaps, but his television credits include made[-for-TV movies Malicious Motives and A Kiss on Candy Lane.  He will also be appearing in the film Help Wanted.

Conner, 29, is from Texas, but now lives in Los Angeles.

As i mentioned, Jill (Jess Walton) will return for an extended stay in Genoa City.  Jess has not been seen on screen for a while due to her husband's illness and death.

Melissa Claire Egan (Chelsea Lawson) will return from maternity leave in December.  I can't wait to see how she reacts to Sally's pursuit of Adam.

Roxanne Hart, known for her role as Nurse Camille Shutt on the medical drama Chicago Hope, will appear in several episodes as Kim Dunaway.  Her first appearance will be on November 18th on CBS and November 17th on Global TV.

It seems as if Nick and Phyllis are done. at least for now.  Who should be Nick's next love interest? Should he reunite with Sharon or Chelsea?  Should he find someone new?  Respond to the poll below and let me know.</

That's all for now.  A Happy Thanksgiving (November 25th) to readers in the United States.  Please remember that the next edition of Y&R Report will appear in this space on Saturday, November 27, 2021.