There's not quite as much to write about because we've had a short week on The Young and the Restless.  Due to American Thanksgiving, the show was not seen on Thursday, November 25, 2021 or Friday, November 26, 2021 on CBS.  On November 25th, there was an encore presentation of Victoria and Ashland's wedding.  Y&R was  preempted on November 24th and November 25th on Global TV

Well, Victoria and Ashland definitely want to become the newest power couple in Genoa City.  They are acting like a younger version of Victor and Nikki Newman.  It seems that Victoria is calling the shouts and leading the way.  That's not a surprise because of all Victor's children, her behaviour most resembles her father's.  She is a cutthroat businesswoman.  She and Ashland just waltzed into Billy and Lily's office and offered to buy their company.  Princess Victoria takes great delight in the prospect of acquiring ChancCom.

Victoria and Ashland praised Lily and were highly critical of Billy.  They want Lily to run ChancCom on her own, without Billy. They dangled the prospect of career success and being CEO of her own company to Lily.  Lily, however, is dubious about accepting their offer.  She doesn't want to fall into a trap. or make a huge mistake.  She knows it's Jill's call anyway.  That's why she phoned Jill to discuss the situation.

Poor Billy Boy Abbott!  He can't help himself.  He is his own worst enemy.  Even when he tries to do something noble, such as resign from ChancCom and let Lily take over, he can't win.  He didn't consult with Lily before making such a momentous decision.  Lily berated him for that.  Billy just doesn't have good judgement.  However, according to an online spoiler and previews, Billy's mother, Jill, will be arriving in town soon and she will take command of the situation.

Faith is back in the swing of things - finally!  It was good to see her have a heart-to-heart conversation with her brother, Noah.  It was about time that Noah really opened up to someone.  He's really been a drag sitting around at home.  Speaking of Noah Newman, I wouldn't be surprised if he and Tessa become romantically involved?  Why?  First, they seem to have a lot in common.  They both like music and art.  Secondly, if those two hooked up, it would create a conflict between Mariah and Noah.  Remember that they are half siblings.  Their mother is Sharon.

The Thanksgiving episode featuring Phyllis and Gloria was hilarious.  It was some much-needed comic relief after all the drama surrounding Chance's disappearance and baby Dominic.  I really enjoyed it.  It showed some real insight into the mind of Phyllis.  Gloria was funny as "Golden Glo."

I'm very pleased to be seeing more of Eileen Davidson lately as Ashley Abbott.  She one of the show's anchors and her presence is very welcome as far as her fans are concerned.

Those of us who watch Y&R on Global TV saw the first scene with the new Chance, played by Conner Floyd.  I will reserve judgement on Conner until I've seen more of him.  His style seems different from the other actors who have played Chance.  He seems less military the others and more bohemian, with longish curly hair.

Much to Abby's disappointment, Chance seems adamant that he won't come home until he brings down the bad guys who killed his colleagues.  Here's what I think may happen.  Abby will go home alone and pretend that has accepted that Chance is dead.  Once he brings down the bad the guys, he will return to Genoa City, but will remain in hiding in order to protect himself and Abby and Dominic.  Devon and Mariah and the others with continue to believe that Chance is gone.  This will cause plenty of conflict, especially where Mariah is concerned.  Chance will eventually return home.  The powers that be at Y&R did not select a new Chance so that he remain in Spain.

Y&R seems to be taking its time to pay tribute to Jerry Douglas, who portrayed John Abbott, the patriarch of the Abbott family, for many years.  They have shown a photo of him with his birth and death dates at the end of an episode. 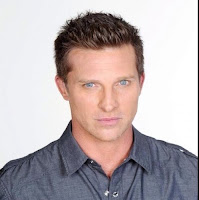 Genersal Hospital has fired former Y&R star. Steve Burton, for failing to comply with on-set COVID-19 protocol (GH has a vaccine mandate, while the other major soaps, including Y&R, rely on testing, social distancing and other on-set protocols).  The actor, who portrayed Dylan McAvoy on Y&R from 2013 to 2017 was let go from his GH role as Jason Morgan because of his refusal to get vaccinated.  Burton says he applied for medical and religious exemptions and he argues that it is a matter of personal freedom.

Victoria and Ashland have offered to buy ChancCom.  They want Billy to resign.  They will put Lily in charge and she will become CEO.  Fans, what do you think of the deal?  Is it fair?  Should Billy resign and allow Lilly to run the show?  Respond to the poll below and let me know.<

That's all for now.  Don't forget that the next edition of Y&R Report will appear in this space on Saturday, December 11, 2021.