What to do about aggravating TV commercials 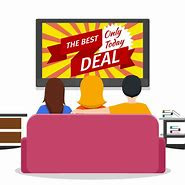 "Since the beginning of this 21st century, advertising has gotten way out of hand and desperately needs to be regulated.  I swear some of these commercial breaks have annoyingly dragged on for five minutes or longer.  Probably, like many others, I get disgusted and change to another program."

- Kevin Dwyer, from a July 2021 letter to the Buffalo News

There was a time when you could enjoy good television shows with few commercial breaks -maybe at the beginning and end of your show, and once in the middle.  Those days are long gone.  Advertising has deprived us of much of the fun and entertainment value of watching television.  It is becoming more and more difficult to watch live network programing on television.  It's bad enough that our shows are interrupted by commercials so frequently, but now we have to endure ads at the side and bottom of our screens while watching our programs.  Even if  we PVR our favourite shows, we can't fast forward past those annoying ads at the side and bottom of the screen during programming.  Not only that , but live sports events and political events are meant to watched live.  Sure, one can PVR them, but it doesn't have the same impact.

I realize that the networks and cable stations need to pay for programming.  However, they are killing the golden goose.  They are causing more and more people to turn away.  There are far too many commercial interruptions and disruptions, and it's only getting worse.  So, what's a TV viewer to do?  What is the alternative?

One can change the channel during commercial breaks, but that interrupts the flow of the program you are watching.  These days, if you change the channel, you are likely to find another commercial about a medical treatment that lists possible side effects that seem worse than the original affliction.

If you are a film fan, Turner Classis Movies (TCM) is wonderful.  It's a blessing.  It shows movies uncut and without commercials.  There are no interruptions from people asking for donations or your financial support.

It's gone out of fashion, but I still watch my ad free DVDs  I have amassed a collection of them and I'm not going to discard them just because streaming has taken over.  So, my DVD player stays!  I have movies, TV shows and documentaries that can't be found on YouTube or any streaming service.

Speaking of streaming services, they are becoming more and more expensive, especially if you want your programming to be ad free.  If you live in Canada, as I do, I recommend that you subscribe to CBC Gem.  It's not expensive and you can watch CBC programs and documentaries commercial free.