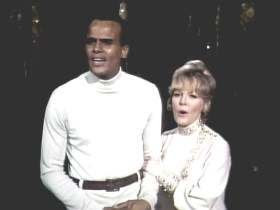 Times sure have changed, and in some ways for the better.  Back in 1968 (48 years ago), Petuala Clark and Harry Belafonte created quite a stir while performing a song together on a prerecorded television special.  It wasn't planned.  It came about quite innocently and spontaneously.

British pop singer Petuala Clark enjoyed a string recording successes in the 1960s, including a massive hit with "Downtown." Early in 1968, NBC invited Petula to host her own American TV special. Jamaican-American singer and musician, Harry Belafonte, was also invited to perform on the show and sing a couple of songs with Petula.  Harry, an ardent supporter of Dr. Martin Luther King and the civil rights movement, had popularized Calypso and Caribbean music during the 1950s.

In March of 1968, an incident occurred during the taping of Petula's NBC special.  It happened when Clark and Belafonte sang a duet called "On the Path of Glory" an ant-war song that Clark had composed.  Near the end of the song, Petula instinctively touched Harry's arm.  So what?  Why was there such a big deal over that?  Well, it happened that an executive at the Chrysler Corporation, the show's sponsor, was in attendance at the taping.  The executive, a man named Doyle Lott, objected to the "interracial touching" and was concerned that it would offend the sensibilities of viewers in the South.  He wanted to substitute a different take, with Clark and Belafonte standing apart from each other.

Steve Binder, the producer/director of the  special, discussed the incident in an interview for the Archive of American Television.  Here is how he described it:

Now we did the show and we got to this "Paths of Glory" song.  And originally I had staged it where it was after Harry had done his solo act.  And then Petula enters and she moves downstage and stops. And she's over his shoulder.  And something wasn't working.  We did, like, three takes like that .  And I finally said, "Stop!"  I went down and I told Petula, "Next time you come out, go all the way up to Harry and stand along side of him."  Which she did.  And she immediately . . . emotionally, I cold tell the two of them were really getting into the lyrics and what the song was saying.  And she reached out and touched Harry's forearm

According to Steve Binder.  "Doyle Lott had gone bananas . . . bonkers and he wanted this edited out immediately," Binder told the Archive of American Television, "You'd thought they'd fornicated on the air."

However, with the backing of NBC, the original takes were erased. and only the "touching" take remained.  Petula Clark, who owned the special, was clearly opposed to Lott's interference.  She and her husband, Claude Wolff, the show's executive producer, refused.to acquiesce to his demand.  They insisted that the special be shown intact or it would not be broadcast at all.

An Associated Press story (March 7, 1968) quoted Doyle Lott as saying, "I was tired.  I over-reacted to the staging, not to any feeling of discrimination."  AP also reported that Belafonte had received an apologetic phone call from Lott.  When Lott implied that it was someone else who had complained about the incident, Harry then responded, "It was you who did it.  Your apology comes 100 years too late."

The apology was also too late to save Doyle Lott's job.  He was relieved of his position as advertising manager of Chrysler's Plymouth division.  Still, the incident made international headlines. Newspaper stories and magazine articles sparked public interest in the NBC special, entitled Petuala,

Petula was broadcast on April 2, 1968, just two days before the assassination of Martin Luther King, with the controversial take intact.  It received positive reviews and high ratings. 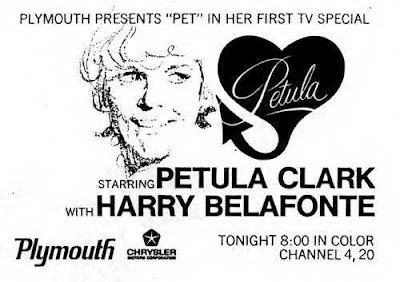 To the mind of a 21st century millennial, all that fuss over the Clark-Belafonte incident may seem ridiculous.  However, it is important to put the incident in context with the times. There was a great deal of racial tension in the United States in 1968 and physical touching between blacks and whites was not seen on televisions screens then.  Still, Variety concluded its review of "Petula" with the reflection that "the touching   which caused such a stir . . . could only disturb the spiritually sick."

It may seem hard to believe now, but when Petula Clark inadvertently touched Harry Belafonte's arm, her gesture made television history.  It is regarded as the first instance on American prime time television of physical touching between a black man and a white woman.  The previous year, new ground was broken when African-American actor Sidney Poitier played a doctor who was engaged to a white woman in the 1967 film Guess Who's Coming to Dinner? (In 1967, interracial marriage was still illegal in 17 U.S. states, mostly Southern). Television had some catching up to do.

Here is a YouTube video of Petula Clark and Harry Belafonte singing "On the Path of Glory."  Take a look.

On September 22, 2008, Petula Clark and Claude Wolff marked the 40th anniversary of the original airing of Petula by appearing at the Paley Center for Media in New York City. They participated in a discussion about the broadcast and its significance.