Forget Dr. Dereck Shepherd (Patrick Depsey) also known as "McDreamy" on Grey's Anatomy.  Back in the 1960s, Richard Chamberlain, star of Dr. Kildare, was the original Dr. McDreamy.  Teenage girls swooned over him.

Dr. Kildare was a medical drama that aired on NBC from 1961 until 1966.  It ran for five seasons and  a total of 190 episodes were produced (132 one-hour episodes and 58 half-hour episodes).  The series was based on a fictional character, Dr. James "Jim" Kildare, created by American author Frederick Schiller Faust, who used the pen name Max Brand.


1.  What was the name of the large metropolitan hospital where Dr. Kildare took place?

2.  What was the name of the senior doctor played by Raymond Massey in the series?

3.  Who played Dr. Gillespie in the Dr. Kildare films?  (This is your bonus question  Give yourself an extra point if you answer it correctly).

4.  How did Dr. Gillespie's portrayal different in the Dr. Kildare TV series than in the films?

A.  Dr. Gillespie had a German accent in the films, not on he television show.

B.  Dr. Gillespie was a bachelor in the films.  He was a widower on the television show.

C.  Dr. Gillespie was blind in the films, not on the television series.

D.  Dr. Gillespie was a recovered alcoholic on the television series, not in the films.

E.  Dr. Gillespie was in a wheelchair in the films, not on the TV show.

5.  What is significant about an episode of Dr. Kildare entitled "Behold the Great Man"?

A.  It was filmed in New York City.

B.  It was the first episode of Dr. Kildare to be broadcast in colour.

C,  It is the only episode in which a patient of Dr. Kildare dies.

D,  It is the only episode in which Raymond Massey does not appear.

E.  Dr, Kildare marries a nurse, but she is killed in a car accident.

6.  Which of the following actors turned down the role of Dr. Kildare on the television series?

7.  What happened to Dr. Kildare by the third season of the show.

A.  He went on a vacation to Europe.

C.  He discovered that he was adopted.

D.  He was promoted to the position of Chief Resident by his mentor and Chief of Staff, Dr. Gillespie.

E.  He is wrongly accused of medical misconduct and loses his medical licence.

8.  What is the name of the theme song from Dr. Kildare?

A.  Three Stars Will Shine Tonight

B.  The Light of Hope

9.  Who sang the theme song from Dr. Kildare?

10.  In 1964, Gillespie and Kildare go to Rome, ostensibly for medical reasons.  Of course, it was really to create a setting for romantic sparks to fly.  In the three-part saga, Kildare falls for an Italian noblewoman, played by Daniela Bianchi.  Meanwhile, Gillespie rekindles an old wartime romance   What was the name of the song Richard Chamberlain sang a song during the episode?

C.  Rome Will Never Leave You

E.  Rome is for Romance

The setting for Dr. Kildare was a large fictional metropolitan hospital called Blair General Hospital. The large white building shown at the beginning of each episode to represent the hospital was really the Irving Thalberg Building on the MGM Pictures set.

Raymond Massey played the role of the curmudgeonly Dr. Leonard Gillespie, Kildare's mentor. Here's some trivia of particular interest to Canadian readers, Massey was born in Toronto, Ontario,  In 1952, his older brother, Vincent Massey, became the first Canadian-born Governor General of Canada.  Vincent Massey died in 1967 at the age of 80.  Raymond Massey passed away in 1983 at the age of 86, 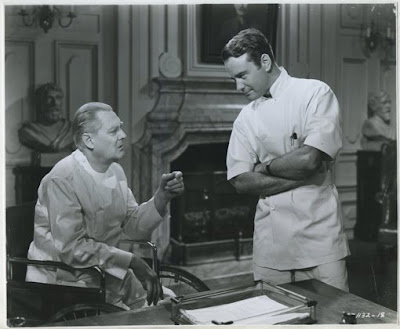 "Behold the Great Man" (Season 5, Episode 1, Air Date: September 13, 1965) was the first episode of Dr. Kildare to be broadcast in colour.  In addition to being broadcast in colour, the series underwent a change in format in its fifth and final season.  It began airing twice a week as a half-hour program instead of once a week for a an hour.

According to his autobiography (Up Till Now: The Autobiography), William Shatner, who later shot to fame as Captain James T. Kirk on Star Trek, was originally offered the role of Dr. Kildare.  Shatner turned it down.  James Franciscus, who also turned the role before it was offered to the largely unknown Richard Chamberlain.  Franciscus starred in NBC's Mr. Novak from 1963 to 1965.

Despite turning down the lead role, William Shatner appeared in six episodes of Dr. Kildare.  He portrayed Dr. Toby Cunningham in a 1961 episode entitled "Admitting Service" (Season 1, Episode 6, Air Date: November 2, 1961).  In 1966, during Season 5 of the series, he played the role of Dr.Carl Noyes in five episodes.

By the third season, Dr. Kildare was promoted from intern to resident by Dr. Gillespie.  In the first season, Kildare, had two intern colleages, Drs. Agurski (Eddie Ryder) and Gerson (Jud Taylor). However, they were written out after the first season as the focus of the show shifted to the patients.

The theme song for Dr. Kildare was "Three Stars Will Shine Tonight," music by Jerry Goldsmith and lyrics by Hal Winn.

Richard Chamberalain sang "Three Stars Will Shine Tonight,"  It was released as a single in 1962 and became a hit, reaching #10 on the Billboard Hot 100.

The song "Rome Will Never Leave You" was commissioned specifically for the episode in Rome.  It was composed by Burt Bacharach and Hal David.

Here is the cast of Dr. Kildare


* Richard Chamberlain was born on March 31, 1934.  He is now 82 years old.  Chamberlain also starred with Rachel Ward and Bryan Brown in the 1983 blockbuster mini-series The Thorn Birds.

* Eddie Ryder, who portrayed Dr. Simon Agurski during the first season of Dr. Kildare, died on March 29, 1997 at the age of 74.  He appeared on television until the 1980s in such shows as The Dukes of Hazard, Hill Street Blues and General Hospital.  Ryder also played the role of Jerry Page in the 1986 television movie A Masterpiece of Murder.