You wanted to know . . . About child star Bobby Driscoll and his tragic death

A TV Banter reader wanted to know about the life of child actor Bobby Driscoll.

Look at that angelic face and those soulful eyes!  Sadly, the fresh-faced youngster in the above photo died penniless and alone after years of drug addiction.  The tale of Bobby Driscoll is indeed a tragic one.  Bobby, whose movie and television career spanned 17 years (1943 to 1960), was born Robert Cletus Driscoll in Grand Rapids, Iowa on March 3, 1937.  He was the only child of insulation salesman Cletus Driscoll and his wife, Isabelle (née Kratz), a former teacher.  Both Cletus, who died in 1969, and Isabelle, who passed away in 1972, outlived their son.

Soon after Bobby's birth, the Driscoll family moved to Des Moines, Iowa, where they remained until 1943.  They then relocated to Southern California after a doctor advised Cletus that the climate there would be better for his work-related pulmonary ailments.

At the age of five, Bobby was discovered by chance at a barber shop in Altadena, California, north of Pasadena.  The barber helped launch Bobby's movie career.  In a 1954 interview, 17-year--old Bobby described the beginnings of his acting career this way: "My dad used to take me to a barber [sic] in Pasadena whose son was in the movies.  The barber liked me, so he spoke his son and his son spoke to his agent and his agent spoke to his director who was arranging a tryout for a part with Margaret O'Brien in the 1943 film Lost Angel."  As it turned out, Bobby was chosen for the part, an uncredited minor role as a young train passenger.

Bobby Driscoll's brief role in Lost Angel, was followed b his appearance in the film, The Fighting Sullivans (1944), a World War II drama in which he played Al Sullivan, the youngest of the Irish-American Sullivan brothers growing up in Iowa during the Great Depression.  A few years later, Walt Disney selected Bobby for the plum role of Johnny in 1946's Song of the South.  He then became the first actor ever signed to a long-term contract by Disney's animation department.and went on to star in some of Disney Studios' most popular Disney films at the time, such as So Dear to My Heart (1949) and Treasure Island ((1950).


Disney figured most prominently in Bobby's career, but he won a special Oscar for his performance in a non-Disney film, The Window, which was released in 1949.  On March 23, 1950, 13-year-old Bobby was presented with a Juvenile Academy Award by Donald O'Connor.  Soon after receiving his Oscar, he was cast as Peter Pan in Walt Disney's animated version of the J.M. Barrie classic.

Bobby Driscoll appeared on Walt Disney's first television production, in a holiday special called One Hour in Wonderland.  It aired on NBC on Christmas Day, 1950 and was sponsored by Coca-Cola.  In addition to Bobby, the special featured Walt as host with actress Kathryn Beaumont, known for her voice work in Disney films, and ventriloquist Edger Bergen and puppet Charilie McCarthy, who performed in radio ads for Coke.  The show was actually a promotion for Disney's upcoming feature film, Alice in Wonderland, in which Kathryn provided Alice's voice.


Bobby lived a charmed life under Disney's wing, until adolescence hit.  At the age of 16, he suffered from a severe case of acne and his voice was no longer smooth enough for voice-overs.  Shortly after the release of Peter Pan in late March of 1953, Bobby's contract with Disney studios was abruptly terminated.  His mother then removed him Hollywood Professional School and sent him to the public Westward University High School.  At Westward, his grades dropped and he began using drugs.  He claimed that the other students  wouldn't accept him, At Bobby request, his parents returned him to Hollywood Professional School, where he graduated in 1955.  In 1956, Bobby was arrested for the first time for possession of marijuana, but the charges were dismissed.  By the age of 17, he was using hard drugs.

During the 1950s, Bobby Driscoll appeared on a number of television shows, but by the mid '50s, with his career on the wane, he was mostly cast in guest spots on anthology series such as Jane Wyatt Presents the Fireside Theatre (1956) and Zana Grey Theater (1956).  In 1957, Bobby only had two television roles.  He portrayed the loyal brother of a criminal in an episode of M Squad, a detective series starring Lee Marvin.  He also played a submarine officer in an episode of the World War II docudrama drama series The Silent Service.

Bobby's final TV acting role was on Rawhide, a popular Western series starring Clint Eastwood.   He portrayed Billy Chance in a 1960 episode of the show entitled "Incident of he Captive" (Season 3, Episode 9, Air Date: December 16, 1960).  Bobby also guest-starred in an earlier episode of Rawhide in 1959 called "Incident of Fear in the Streets" (Season 1, Episode 17, Air Date (May 8, 1959).  For his two Rawhide appearances, he was credited as "Robert Driscoll," in an an attempt to sound more adult, so he could distance himself from his childhood roles.and the perception that he was still Disney's kid actor (his family and friends began referring to him as "Bob" in the early 1950s).

Below is a photo of Bobby in his last television appearance from the "Incident of the Captive" episode of Rawhide in 1960. 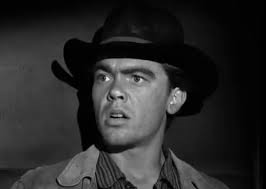 In June of 1960, Bobby was arrested for disturbing the peace and assault with a deadly weapon after allegedly "whacking a heckler with a pistol," according to newspaper reports. The heckler and her boyfriend had taunted him and Bobby had taken the gun from a car he was washing in Topanga Beach near Malibu, California.  Felony assault charges were dropped.because the district attorney failed to file a complaint.  However, in 1961, Bobby was arrested for robbery, assault and narcotics possession.  This time he was sentenced as a drug addict and he was incarcerated at the Narcotic Rehabilitation Center of the California Institution for Men in Chino, California.  When he left Chino in 1962, he was unable to find employment in the acting profession and his downward spiral continued.  He was rejected by the entertainment industry because of his record as a drug addict and a convict.  An embittered Bobby declared, "I have found that memories are not very useful.  I was carried on a silver platter - and then dumped into the garbage." 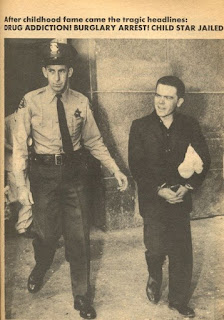 In 1965, Bobby Driscoll moved to New York City with hopes of appearing on Broadway.  His life, once held so much promise, eventually degenerated into a horror story and  his attempts to revive his acting career proved unsuccessful.  Nevertheless, he joined Andy Warhol's Greenwich Village art community, known as The Factory and concentrated on his artistic talents.

Bobby left The Factory and the avant-garde art scene in late 1967 or early 1968 and vanished into Manhattan's underground.  He was destitute and desperate.  On March 30, 1969, two children playing in an abandoned Greenwich Village tenement in New York City made a gruesome discovery.  They found the body of a young man on cot, surrounded by beer bottles and religious pamphlets.  The man had no identification and his body went unclaimed.  A medical examination determined that he had died of heart failure, the result of longtime drug abuse.  Authorities were unable to positively identify the man and photos of him were not recognized in the neighbourhood.  Thus, he was buried as a "John Doe"in a pauper's grave in New York City's Potter's Field on Hart Island.

In October of  1969, Bobby's mother tried to locate her son with the assistance of  officials at Disney studios.  She wanted to contact him so that he could be reunited with his father, Cletus, who was dying.  This led to a fingerprint match at the New York City Police Department.and the location of Bobby's burial on Hart Island.  Bobby Driscoll,was just 31 years old at the time of his ignominious death.  Although his name is included on his father's gravestone in Oceanside, California, his remains are still on Hart Island.

Bobby's passing was not reported to the public until 1971, just as his first Disney film, Song of the South, was about to be re-released.  When the press tried to locate the film's major stars, Bobby's mother revealed the horrible fate that had befallen her only child.  She took comfort from police and medical reports that showed there were no puncture marks on his body and there were no traces of heroin.

On December 3, 1956, Bobby Driscoll, age 19, married his girlfriend, Marilyn Jean Rush.  They eloped to Mexico due to the objections of their parents.  However, they wed again in a Los Angeles ceremony in March of 1957.  The couple had three children (two daughters and one son) but divorced in 1960.


* In 1954, Bobby was awarded a Milky Way Gold Star Award for his achievements on television and radio.