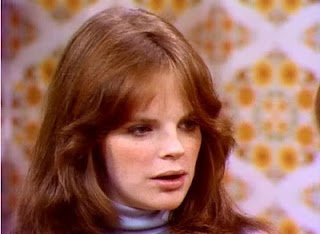 A TV Banter reader wanted to know about the life of Debralee Scott, who played Mary's younger sister on Mary Hartman, Mary Hartman

Debtslee Scott: 31 going on 18, is a red-haired, freckle-faced, all-American version of everybody's favorite kid.  In person, she reminds you of Judy Garland in her "Wizard of Oz" days.  She could have been Judy's sister.

Debralee Scott was born in Elizabeth, New Jersey on April 2, 1953.  The youngest of three sisters, Debra was raised in Stroudsburg, Pennsylvania, where she was a cheerleader.  At 16, she joined her siblings, Carol Anne and Jerilyn (Jeri), in San Francisco and finished high school there.  She also attended San Francisco's American Conservatory Theater

Debralee's film debut was in 1971's Dirty Harry.  She played the corpse of the murdered Ann Mary Deacon.  She then appeared in the opening credits of 1972's Butterflies Are Free and she portrayed Falfa's girlfriend in the 1973 coming-of-age film American Graffiti.

Debra's original feature film roles were minor ones.  In 1973, however, she made a move toward larger television roles.  In 1973, she appeared in two TV movies.  She played Lenore Atkins in A Summer Without Boys, a war drama/romance, and Mary Nell Fickett in Lisa, Bright and Dark, a drama starring Anne Baxter and John Forsythe.

In 1974, Debralee portrayed Evie Mortenson in four episodes of the 1950s television high school drama Sons and Daughters.  The series was short-lived and only ten episodes were produced.  In 1975, Debralee appeared as Rosalie "Hotzi" Totzi in four episodes of the first season of the Gabe Kaplan sitcom Welcome Back, Kotter.  She reprised her role as "Hotzi" Totzi in a 1978 episode entitled "The Return of Hotsy Totsy" (Season 3, Episode 26, Air Date: May 11, 1978).

Debralee is best remembered for her portrayal of Cathy Shumway, Mary, Hartman's outlandish younger sister, in the mid-1970s cult classic Mary Hartman, Mary Hartman.  The show, starring Louise Lasser in the title role, was a nightly spoof of TV soap operas.  It attracted a large following and provided Debralee with her first taste of stardom.

Mary Hartman, Mary Hartman ran for two seasons, from 1976 to 1977, with Debralee Sccott appearing in all 325 episodes.  Mary Hartman, a dissatisfied Fernwood, Ohio housewife, ran off with her  policeman boyfriend, but the show continued without Louise Lasser.  It was retitled Forever Fernwood and focused on the residents of the fictional Ohio town.  Forever Fernwood ran from 1977 to 1978 and Debra Lee continued playing the role of Cathy Shumway.

Below is a photo of Debralee (left) with Louise Lasser (Mary) and Mary Kay Place as Loretta Haggers on Mary Hartman, Mary Hartman.

Below is a photo of Debalee with Doris Roberts (centre) and Dona Pescow (right). 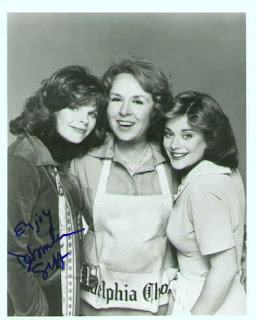 After Angie, Debralee took on few television roles.  She played Hazel Adamson in the 1981 TV movie Living in Paradise, a comedy starring Eddie Albert..  She also appeared as a "restaurant woman" in a 1983 TV movie entitled Likely Stories, Vol. 2., a comedy starring Vince D'Angelo as a sleazy politician.

Debralee played the role of Mrs. Fackler in Police Academy the popular feature film comedy, Police Academy, starring Steve Guttenberg.  She also appeared as Cadet Fackler in 1986's Police Academy 3: Back in Training.  According to the Internet Movie Database (IMDb.com), Debralee's final acting credit is the role of a school teacher in the 1989 film Misplaced, a drama about a Polish woman who, on the eve of the Polish uprising, takes her son to America.  She then decided to work behind the camera as an agent for a New York company called Empowered Artists.

In 2005, Debralee Scott moved from New York to Florida to live with her ailing sister, Carol Anne, who had retired there.  Soon after arriving, Debralee collapsed into a coma.  She quickly recovered and was released from the hospital on her birthday, April 2nd.  On April 5, 2005, Debralee took a nap, then died in her sleep.  She was just 52 years of age at the time of her passing at her home in Amelia Island, Florida.  Her body was cremated.

The mother of John Dennis Levi claimed that Debralee had had a drinking problem since 9/11, and that she had developed cirrhosis of the liver.  Debralee's sister, Jeri Scott, a Beverly Hills talent agent, stated that her sibling had never gotten over Dennis Levi's death.  She said that Debralee died of natural causes.

* During the late 1970s and early 1980s, Debralee Scott  frequently appeared on games shows.  She was a celebrity guest on The $20,000 Pyramid, Family Feud and The Match Game.

* In 1979, Debralee played a nurse in some episodes of a real daytime soap, Ryan's Hope.

* Debralee's elder sister was film producer and costume designer Scott Bushnell.  Bushnell (born Carol Anne Scott on July 18, 1937) was nicknamed "Scotty."and is remembered for her long association with filmmaker Robert Altman (She served as producer on more than 20 Alltman films).

Scott Bushnell passed away in Burbank, California on July 13, 2006.  She died of heart failure at the age of 69, just days away from her 70th birthday.