Price of Pop Culture 2020: The cost of streaming (focus on the UK)

Here is a infographic on the price of pop culture streaming in 2020.  It was designed by Ocean Finance, a British company, so all statistics are related to the United Kingdom and all costs are in British pounds.  I hope you find it informative and useful

Ocean Finance delved into what we’re all spending on streaming, how to get the most for your money and which genres to look out for in 2020. 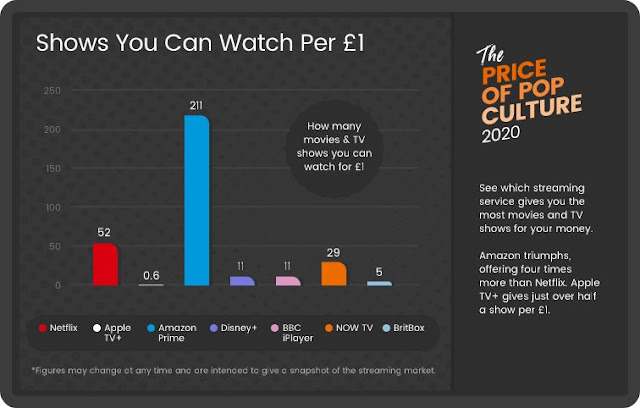 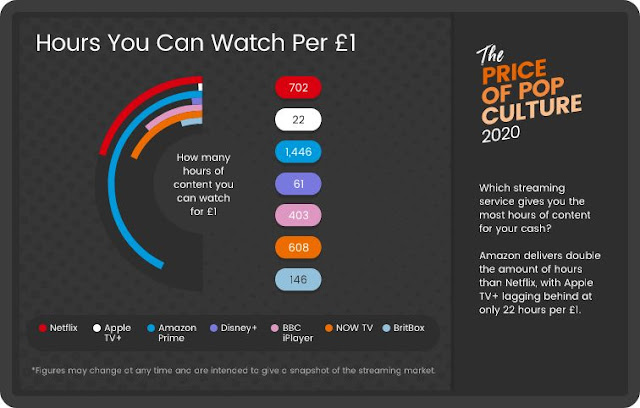 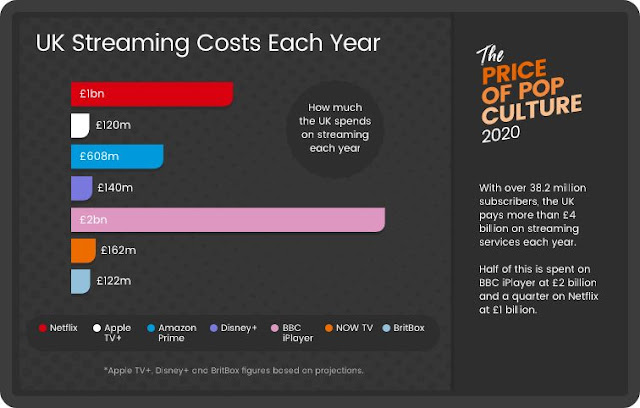 Around 50% of the UK are subscribed to a streaming service like Netflix and Amazon.Prime Video, according to Ofcom.  With new platforms like BritBox arriving, more and more of us are subscribing to watch TV's biggest hits like Game of Thrones and Strangeer Things.and there's even more to come in 2020.

Ocean Finance calculated how many hours of content, plus how many individual movies and TV shows are delivered by each streaming service, then calculated how much you’d get for a £1 based on their annual prices. Amazon Prime TV gives you the most content for your cash. In fact, you can see a huge 211 movies or TV shows for just £1 with an annual subscription – that equals to 16,669 programmes a year. To compare, if you spent £1 watching one show on Netflix, Amazon would give you four for the same price.


If you're a film lover, Amazon offers five times more movies for £1 than Netflix.  Disney+ falls behind further, giving you just nine films per £1.  Britboxx will give you even less, offering you only one move for £1,


Binge-Watch 17 TV series for £1 with Netflix

Though you'll get almost double the content with Amazon who takes the top spot again, offering 30 TV programmes for only £1.


The UK spends £1 billion more on BBC iPlayer than Netflix

The UK spends £1 billion more on BBC iPlayer than Netflix

With 13.4 million subscribers, the UK spends the most on BBC iPlayer at a massive £2 billion per year. It might be free to use but you’ll need to pay £154.50 for a mandatory TV licence, no matter what you want to watch. We’re spending half this amount on Netflix at £1 billion per year and even less on Amazon, which costs the UK £600 million annually.


Apple TV+ and the anticipated Disney+ will set us back further.  These newer streaming services are expected to have at least two million UK subscribers in the next few years, costing the nation £120 million for Apple TV+ and £140 million for Disney+.

Britbox is also expected to have 1.7 million British subscribers in 2020, meaning the UK will spend around £122 million on the service.

Amazon Prime TV is better for bingeing because of its colossal amount of content. You can watch 1,446 hours of TV or movies for £1 with Amazon, which is double Netflix’s offering of 702 hours. NOW TV is only slightly behind, delivering 608 hours per £1

It is estimated that Netflix spends an enormous £9.3 billion on creating original content., compared to £2.7 billion
spent by the BBC.

Amazon and Apple are devoting the same amount into original content.  Both media giants are predicted to spend £4.7 billion on original titles, suggesting Apple is trying hard to break into the world of streaming subscriptions by matching its competitor.

Newly launched BritBox will add an extra £71.88 to your annual bill, but much of the platforms original content is still in production.

Not a lot has been revealed  about BritBox's unique contributions.  While there might be plenty in the pipeline, established favourites like Killing Eve won't be available due to existing contracts with other streaming platforms in place.  If you want to watch the biggest releases, IPlayer might be the better option.

Disney spends the most on original content at £18.6 billion

The biggest spender is Disney, who's putting an eye-watering £18.6 billion into original films and TV shows.  Now that Disney owns Marvel, Fox, Pixar, Lucasfilm Ltd. and plenty more, it's not surprising that the mass media conglomerate is putting so much extra into unique entertainment.

Streaming costs have doubled in a decade

With 40% admitting they don't think they'll watch traditional broadcasts in just five years, streaming services are taking over.  Out data shows the amount of TV and film streaming services has tripled since 2006.  As additional shows become available, we're spending more to see them.  10 years ago, the main streaming services cost £262 annually, which has now more than doubled to £651.

Comedy is set to be the biggest genre of 2020

Our research also uncovered comedy (18%) as the most popular genre of 2020, based on the most anticipated releases.  It's predicted that you'll be laughing at the likes of Curb Your Enthusiasm and Barry.

Closely following comedy, expect to watch period programmes (13%) such as The Crown and Outlander and drama shows (11%) including The Undoing and Salisbury.

How much did 2019’s biggest TV moments cost?

Ocean Finance Quote
Commenting on the findings Anastasia Letsos at Ocean Finance said “It’s tempting to sign up to the top streaming services when they offer such great content. However, our research shows that a subscription to the top 7 streaming services would set you back £650 so you may want to plan which shows to budget for.
Letsos continued: We analysed the 38 most-anticipated shows of 2020 and calculated the true cost of popular culture as £456. Our findings show that the most cost-effective service is Amazon Prime TV which offers 211 shows, or 1,446 hours of content per £1 spent. However, Netflix has the most-anticipated shows of 2020 (29%) vs Amazon who boast 21% of the must-see shows of 2020. If it’s original content you’re looking for then head to Disney who spend £18.6 billion on their new releases.”

Standout Findings
Other standout findings from Ocean Finance’s findings include:
You can view the piece here: https://www.oceanfinance.co.uk/blog/the-price-of-pop-culture-in-2020/
Posted by Joanne at 7:07 PM