Well, it's the festive season in Genoa City and everyone is celebrating. It's Kyle and Lola's first Christmas together.  They put up their tree and decorated it with a lot of sentimental ornaments.  They act like a happy couple, but there are dark storm clouds on the horizon for those two.  As viewers know, Theo is really sweet on Lola.  I'm not sure if he's fallen hard for her, or whether he just enjoys the challenge of winning over Kyle's wife.  It's probably a combination of both.  Theo's competitive and vengeful toward Kyle.  He also enjoys attention from the lovely Lola.

Unfortunately for Theo, he's given himself away.  Summer knows he's after Lola.  She figured out the reason he dumped her was because of the super chef.  Theo should be concerned that Snowflake knows what's going on.  She knows his game now and she may try to put a stop to it.  However, since Summer is smitten with Kyle herself, I doubt she'll pass up an opportunity to get him back if Theo succeeds in coming between him and Lola.

What is going on with Billy Boy Abbott?  He's really a mess.  He's drifting along and he doesn't really know what he wants.  He has found a kindred spirit in Amanda Sinclair, since she doesn't seem to know what she wants either.  That's why they've bonded.  It's inevitable that he's going to hurt Victoria.  She thinks she's "living the dream" right now, but she's in for a real shock.  I expect that Daddy Victor will investigate Billy Boy.  He's already curious about Billy's phantom new job.  He tried to grill him about it.  So, it won't take 'The Moustache long to find out that Billy's been lying about having being employed.

Victor is also going to obtain photos of Bill with Amanda and Billy playing poker.  He has already had a complete background check done on the mysterious Amanda and presented the dossier to Devon.  Mr. Moneybags will be quite upset that his daughter's partner has been associating with her.  Amanda is clearly running away from something or someone.  That's why she has deleted online information about herself.  She has no digital footprint.

That's why Devon is right to have questions about her.  I don't blame him for being spooked by her resemblance to Hilary.  Amanda's definitely hiding something big and she's been contacting an unknown person.  Dr. Nate is clearly naive about her.  I just hope Amanda doesn't turn out to be Hilary's long lost twin sister.  We've already gone down that road before with Cassie and Mariah.

When Victor eventually learns that Billy Abbott has broken Princess Victoria's heart, he will be livid. The wrath of Victor Newman will descend upon Billy Boy.  I would not want to be in Billy's shoes then. There's no one he is more protective of  his princess than Victor Newman.

It was good to see Faith (Alyvia Alyn Lind) back in Genoa City. She's certainly looking grown up and she's interested in boys now.  I wonder if she'll have better luck in that department than her parents, Sharon and Nick and her sister, Summer, who is eager to provide her with advice on dealing with boys.  At least Faith's  had the opportunity to learn from their mistakes and she may go down a different path.

I was also glad to see the foursome of Michael, Lauren, Paul and Christine (aka The Cricketmeisster) after a long absence.  Fen is also going to show up  The scene with the quartet in the restaurant was funny and lighthearted.  However, they should have toned down Paul and Michael's arguing.  They never would have been so loud.

I spoke to longtime Y&R viewer, Fifi from Collingwood, Ontario.  Fifi had some comments about Chance and Phyllis  Fi thinks that Chance and Phyllis have chemistry and that they will get together.  She thinks they have more chemistry than Chance and Abby.  I've thought about her comments and I've come to the conclusion that Fifi may be right about Chance and Phyllis hooking up.  Right now, Phyllis appears to want Nick back and Chance seems to be starting a romance with Abby.  That could be all a mirage to keep viewers from figuring out what will really happen.  In one of the online spoilers, I read that Phyllis is going to take advantage of an opportunity to flirt with Chance.  I know.  Phyllis flirts with lots of men.  However, when it comes to predicting what will happen on a soap, you have to ask yourself what will create the most conflict.  Phyllis and Abby dislike each other intensely.  So, Abby would not be very pleased about Phyllis going after Chance.

One thing about Phyllis is that she seems to be everyone and interfering with everyone.  The redhead is omnipresent and ubiquitous.  She'll go anywhere unannounced and listen into any conversation. 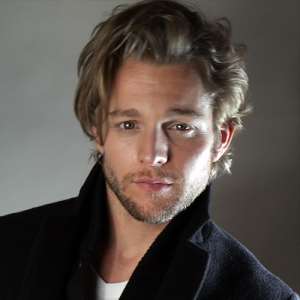 According to Soap Opera Digest,  new character is headed to Genoa City.  His name is Tanner Watts and he will be played by former One Life to Live star Chase Coleman (born March 20, 1985 in Tuscaloosa, Alabama).  Coleman's other credits include The Originals, Vampire Diaries, Boardwalk Empire, In Between Men and Aquarius.

Tanner is a recording artist who has a past connection with someone in GC.  The role is said to be short term, but if viewer reaction to the character is positive, he could be kept on.  Coleman's first appearance is set for Friday, January 3, 2020 on CBS (Thursday, January 2nd on Global TV in Canada).

On Sunday, December 8, 2019, I attended the Y&R OpportuniTea in support of Maarch of Dimes Canada.  There were 5 Y&R actors in attendance: Kate Linder (Esther Valentine), Christian LeBlanc (Michael Baldwin), Christel Khalil, Mark Grossman (Adam Newman), Sharon Case (Sharon Newman).  I spoke briefly with some of the actors during the autograph session and they were all very gracious.  I asked Mark Grossman about what happened in Vegas.between Chance and Adam.  He told me that they were still working on it and he didn't know yet.  However, the secret is starting to come out.  We know that Adam helped Chance get out of a jam.  That's all we know so far.

Here are some photos taken during the autograph session:

As Y&R fans know, there is no love lost between Phyllis and Abby.  Abby will not be too thrilled if Phyllis sets her sights on Chance (Danny Boaz).  Fans, do you think Phyllis and Chance should be a couple or is he better off with Abby.  Click on the poll below and let me know


Is Phyllis a good match for Chance?
Survey Creator


That's all for now.  Merry Christmas to all who celebrate  and a Happy Hanukkah to all my Jewish readers.  The next edition of Y&R Report will appear in this space on Saturday, January 4, 2020.  Happy New Year and I hope 2020 brings you much happiness.