Whatever happened to Susan Dey? 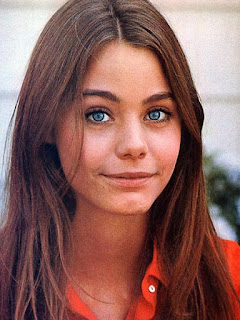 Susan Hallock Dey was born on December 10, 1952 in Pekin, Illinois.  Her father, Robert "Bob" Smith Day, was a newspaper man.  Her mother, Ruth Pyle (née Doremus) Dey, was a nurse,  Susan and her family moved from Illinois to New York state in order to further her father's career in the newspaper business.  (He eventually became editor of the Standard-Star in New Rochelle, New York).  In 1961, when Susan was 8, her mother died of complications from pneumonia, leaving Bob to raise four children.  He eventually married a woman named Gail Shellenberger, who became Susan's stepmother.  Below are photos of Bob, Gail and the family and Susan with her sister Leslie. 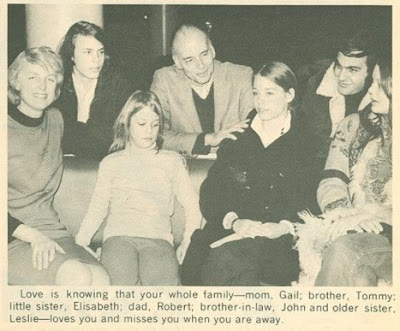 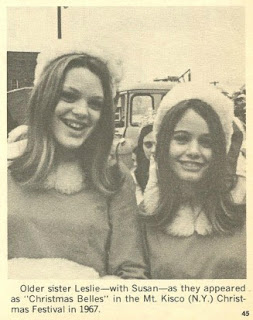 Susan Dey attended Columbus Elementary School in Thornwood, New York.  She then graduated from Lane High School in Bedford, New York, where she was a drama club member.  Susan was a teen model before becoming an actor.  Her older sister, Leslie, was also a model and they worked tor the same agency.  It was their stepmother, Gail, who had sparked their interested in fashion modelling.  After seeing an ad for models in Seventeen Magazine, Gail submitted their photos to a prominent New York modelling agency and the sisters were hired by the agency in 1968.

At the age of 17, Susan was cast as Laurie Partridge in a new ABC series called The Partridge Family.  Although she had little acting experience, she found herself starring in a hit TV show about a family band.that travelled to performances in a remodelled psychedelic school bus.

The sitcom featured Shirley Jones, whose real life stepson, David Cassidy, became one of the most popular teen heartthrobs of the 1970s.  David played Keith Partridge the eldest son of the family and Susan was not immune to his charms.  She had strong feeling for him, but David not reciprocate those feelings.  It was a painful case of unrequited love because he viewed her as a sister.

By 1977, Susan was the co-star of a television series called Love Me, Love me Not.  It was her first weekly TV series since The Partridge Family.  The short-lived sitcom centred around a young couple who have just started dating and are unsure about their relationship.  Kenneth Gilman portrayed Dick Phillips,a newspaper reporter, who falls for Jane Benson, a California school teacher, played by Susan.  Only six episodes of the show were produced and CBS cancelled the series after the last one was broadcast.

From 1983 to 1984, Susan Dey had a role in the soapy prime time naval drama, Emerald Point, N.A,S. The short-lived series starred Dennis Weaver as Rear Admiral Thomas Mallory and an ensemble cast, including Richard Dean Anderson, Jill St. John, Maud Adams and Patrick O"Neal who was replaced by Robert Vaughn. Susan played Mallory's oldest daughter, Celia Warren. The show lasted only one season and Dey appeared in all 22 episodes.


From 1986 to to 1992, Susan Dey portrayed Grace Van Owen, a California district attorney and later judge on the TV drama series L.A. Law.. In 1988, Susan won a Golden Globe for Lead Actress in a Drama Series for her L.A. Law role. She also received three Emmy nominations during the show's lengthy run. However, she became increasingly disenchanted with her role. A major cause of her dissatisfation was her onscreen romance with the character Michael Kuzak, played by Harry Hamlin. She threatened to leave if the writers did not end their on-again, off-again relationship.

Harry Hamlin left L.A. Law in 1991.  Susan.left in 1992, after the finale of the show's sixth season, an episode entitled "Say Goodnight Gracie," The series remained on the air until 1994 and Dey and Hamilin reprised their roles as Grace and Michael in a 2002 television movie entitled L.A. Law: The Movie,

Susan Dey has been married twice. She wed Hollywood agent Leonard "Lenny" Hirshan in 1976. Hirshan worked as Susan's agent and was 25 years her senior. The couple had a daughter, Sarah Dey-Hirshan, (born November 1978), but they divorced in 1981. Hirshan (born December 27, 1927) died in 2014 at the age of 86,  The longtime William Morris agent represented Clint Eastwood for over 50 years.  He also represented such luminaries as Elvis Presley (with Colonol Tom Parker), Walter Matthau, Sophia Loren, Eva Saint Marie, Sammy Davis, Jr. and Edward G. Robinson.

On February 20, 1988, Susan wed her second husband, television producer Bernard Sofronski. Their marriage ceremony was a private affair, with only their closest friends and family in attendance.

* While on The Partridge Family, Susan developed her acting skills and her musical skills, including piano and harmonizing.

* On the advice of her agent, Susan turned down the role of Sandy in the 1978 film Grease. The role, of course, went to Olivia Newton-John. It turn out to be a huge hit for Olivia and co-star John Travolta.

* Susan has been very candid about her teenage bout with anorexia and bulimia. In the 1970s, there was little awareness of anorexia. However, Partridge Family cast members noticed that Susan wasn't eating. When Danny Bonaduce, who played her younger brother, Danny Partridge, saw her in a bikini, he grimaced and told her she looked disgusting. It was then that she realized she had a serious problem. At the height of her illness, she weighed about 90 pounds (40.8 kilograms). She had stopped having menstrual periods and her fingers turned noticeably orange from eating almost nothing but carrots.

In 1989, Susan told the The Washington Post that her eating disorder developed from being a very public teenager in an era when there was an increased focus on independent women and pencil-thin models like Twiggy were in the spotlight. "At that age, "said Susan, you feel like an adult but you are not an adult and society does not treat you as an adult . . . One of the choices you do have is what you eat and what you don't eat . . . Also the sexual revolution started at that time and when you're anorexic you've got the body of a man so you don't have a lot to deal with."

* In 1992, Susan appeared as host on an episode of Saturday Night Live which included a skit about The Partridge Family versus The Brady Bunch.

* Susan has been a board member of the Rape Treatment Center at UCLA Medical Center. She also co-narrated a documentary on campus rape with her former L.A. Law co-star Corbin Bensen.