Tribute to Orson Bean: Struck dead by a car at 91 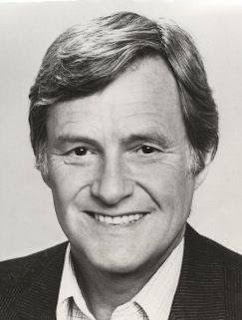 People shouldn't get into show business because they want to become stars or become rich; they should get into it because they can't help but put on a show

I was saddened by the news of Orson Bean's death at the age of 91 after being hit by two cars in L.A.  On February 7, 2020, Orson was walking near the intersection of Venice Boulevard and Shell Avenue in Venice, Los Angeles when he was fatally struck in a traffic collision.  A family representative said he was crossing the street near the Pacific Resident Theater, where his wife, actress Alley Mills, was preparing for an upcoming production..  The couple had recently starred in a play at the Ruskin Group Theatre in Santa Monica, California.

According to Captain Brian Wendling of the L.A. Police Department, "The car coming westbound did not see him and clipped him and he went down.  A second vehicle was coming up, was distracted by people trying to slow him down and then looked up and then a second traffic collision occurred and that one was fatal."  He was pronounced dead at the scene.  An L.A. Police spokesperson stated that it was not a "hit and run."

Orson Bean was an veteran actor of the stage and screen and a well known television personality.  He made frequent appearances on TV game shows from the 1960s to the 1980s.  He became a familiar face on Password, The Match Game and Tattletales.  Most notably, he was a longtime panelist on To Tell the Truth.

Below is a photo of Oron as a panelist on To Tell the Truth.  He is sitting third from the left between fellow panelists Peggy Cass (left) and Kitty Carlisle (right).  Tom Poston sits on the far left.  Standing is host Brad Collier. 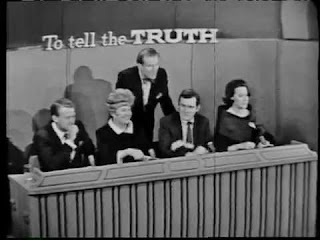 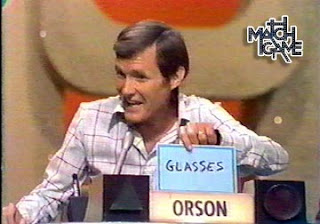 Orson Bean was born Dallas Frederick Burrows in Burlington, Vermont on July 22, 1928.  He was raised near Harvard University, where his father, George Burrows, was a campus police officer.  George was also a founding member of the American Civil Liberties Union.  Orson's mother, the former Marian Ainsworth (née Pollard) committed suicide when Orson was 16 years old.  He left home after her death

In 1946, Orson Bean graduated from the Cambridge Rindge and Latin School (known as CRLS or Rindge), a public high school in Cambridge, Massachusetts.  He then enlisted in the United States Army and was stationed in Japan for a year.  After his service in the military, Orson worked as a magician before turning to stand-up comedy in the early 1950s.  He performed in small clubs near Boston and Philadelphia before heading to New York, where Broadway and The Ed Sullivan Show awaited.  From 1950 to 1960, Orson was the house comic at the Blue Angel night club in the Big Apple.

Orson began appearing on the Tonight Show in the 1950s.  According to the Associated Press, he appeared on the program over 200 times, often filling in for Jack Parr and Johnny Carson.  Orson was a great storyteller and a favourite of Johnny Carson.  In a 1974 appearance with Carson on The Tonight Show. he described his stage name as a combination of the pompous and the amusing.  He related how Orson Welles called him over to a table at the Blue Angel one night and declared, "You stole my name" and then waved him away.

Orson Bean made a memorable appearance in a 1960 episode of one of my all-time favourite shows, Rod Serling's The Twilight Zone.  In the episode, entitled "Mr. Bevis" (Season 1, Episode 33, Air Date: June 3, 1960), Orson played James B.W. Bevis, a bumbling man who loses his job, his car and his apartment on the same day.  A guardian angel helps him start a new life, but there is a price to be paid.

Below is a photo of Orson Bean (right) with William Schallert in the "Mr Bevis" Twilight Zone episode. 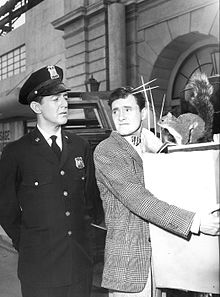 In the early 1970s, Orson "dropped out" and lived a bohemian lifestyle.  In a 1989 interview, he told the Los Angeles Times uprooted his family and moved to Australia after the March 6, 1970 Weather Underground Explosion occurred (Three members of a leftist paramilitary group called the Weather Undergound Association were killed when a bomb they had built exploded in the basement of a townhouse near Orson's Greenwich Village home).  "I turned 40 and ran away from home," Bean said. "I had a lot of money in the bank and I just spent it."

Orson and his family returned to the United States a year and a half later.  "I came back, pierced my ear, grew a beard, bought an old van, tossed the kids in the back, and we lived like hippies for three years," he recalled.

In 1977, Orson appeared as Reverend Brim in Forever Fernwood, the sequel to cult favourite Mary Hartman, Mary Hartman.  From 1986 to 1989, Orson played Oliver Thompson in the family sitcom The Facts of Life.  From 1993 to 1998, Orson portrayed Loren Bray, a grumpy storekeeper, on Dr. Quinn, Medicine Woman.  From 1996 to 1997, he played the role of Oliver Thompson in three episodes of the sitcom The Facts of Life.  In the 1990s, he guest-starred on such series as Diagnosis Murder (1998) and Ellen (1998).  Orson portrayed 105-year-old "Dr. Lester" in the 1999 feature film Being John Malkovich,

From 2099 to 2012, Orson played Roy Bender on the comedy/drama Desperate Housewives.  In 2011, he guest-starred as Dan in an episode of Hot in Cleveland.  He also appeared as Marty in an episode of Modern Family entitled "Playdates" (Season 7, Episode 10, Air Date: January 6, 2016).

Orson never retired and continued to act into his 90s.  He recently appeared in a 2020 episode of the Netflix series Grace and Frankie, starring Jane Fonda and Lily Tomlin.  In the episode, entitled "The Scent," he portrayed a character named Bruno.

Orson Bean was married three times.  His first wife was actress Jacqueline de Sibour, the daughter of a French nobleman (Her stage name was Rain Winslow).  The couple wed in 1956 and had one child, Michele.  They divorced in 1962.

In 1965, Orson married Carolyn Maxwell, an actress and fashion designer.  They had three children: Max, Susannah and Ezekiel, but divorced in 1981.  Their daughter, Susannah, married controversial right-wing journalist Andrew Breitbart in 1997.  Breitbart died in 2012.

After his second wife left him in 1981, Orson Bean descended into a life of alcohol, drugs and loneliness.  He eventually moved from New York to Los Angeles to be nearer to his children.  He later wrote Mail for Mikey, detailing his addiction and recovery.

Orson's third wife was actress Allison "Alley" Mills (born May 9, 1951), who played Kevin Arnold's mother, Norma, on The Wonder Years.  Alley also had a recurring role in Dr. Quinn, Medicine Woman and portrayed Pamela Douglas on the daytime soap The Bold and the Beautiful.  She and Orson resided in Los Angeles and remained together until his death

Orson Bean's lengthy career spanned decades, from Hollywood's Golden Age to the Age of Netflix.  He referred to himself as a neo-celebrity. someone who is "famous for being famous."  However, he was so much more than that.  His contribution to film, televison and theatre will long be remembered.  R.I.P. Orson.

* Orson portrayed a psychiatrist in the film Anatomy of a Murder, a classic 1959 courtroom drama.directed by Otto Preminger.

* During the Cold War, Orson Bean was blacklisted from television for about a year because he had a communist girlfriend whom he claimed had dragged him to a couple of meetings.  Ed Sullivan cancelled Orson's appearance on his show, even though Orson had already appeared on the Sullivan show seven times (Sullivan eventually booked him on the show again, blaming the blacklisting on his sponsor, Campbell's Soup).  Nevertheless, Orson went from being a popular CBS comic to not working.  Fortunately, he was able secure a role in Will Success Spoil Rock Hunter?, an off-Broadway play

In 1964, Orson opened The Fifteenth Street School, a progressive school in Manhattan modelled after educator A.S. Neill's Summerhill School in England.  The school was partly based on the theories of Austrian psychoanalyst Wilhelm Reich, which Orson described in his 1971 book Me and the Orgone, written after he had moved his family to Australia.

* Orson appeared on two daytime soap operas.  In 1982, he portrayed Harrison Logan in an episode of One Life to Live.  In 2016, he played Howard on The Bold and the Beautiful.