Well fans, it's been difficult to keep up with Y&R due to all the interruptions from the Donald Trump impeachment trial.  However, Global TV has not interrupted Y&R half way through an episode.  I have also watched videos of some episodes on Global online.  So, I have been able to keep up.

By revealing her cancer diagnosis to only Rae, Nick and her children, Sharon is making life awkward for them.  They are forced to keep her secret.  However, busybody Phyllis, the nosiest person in Genoa City was able to figure it out.  Phyllis was actually quite upset about Sharon's illness, although the two have never liked each other.  The two women have never gotten along, especially because Phyllis had an affair with Nick while he was married to Sharon.

Some people can never figure out what they want in life.  Billy Abbott is one of them.  According to an online spoiler, he is going to spiral out of control.  He just can't find his groove.  Maybe people are too quick to judge Billy, but he seems to think he always knows best and that he can handle everything.

Have you noticed that the images of the actors in the opening theme correspond to whether they will appear in the episode?  If you want to know who will appear in an episode, all you have to do is look at the images.  I like that.  It gives me a good idea about what the episode will be about.  It lets me know if my favourite actors will be shown.

Here is some good news for Y&R fans.  The Young and the Restless has been renewed for four more years, until 2024.  Days of Our Lives has also been officially renewed for a record 56th season,.until the summer of 2021.

Here is an e-mail I received from Carly in Barrhaven, Ontario.

Phyllis is way over the top and I don't like what they're doing with her character.  I don't like Chance.  I'm not happy with Sharon's storyline and I'm sick and tired of the Billy storyline.  So why do I watch it?

I think Adam and Chelsea will last for a while but you never know what he is up to.  What will be interesting is what went on between him and Chance in Vegas.  I look forward to the big gala for Newman Enterprises.  Oh yes, I am sick of the Summer, Kyle, Lola and Theo characters too.


I also think Phyllis is way over the top, Carly.  She has become a caricature.  She may be amusing, but she is not believable.  She is much too cartoonish.  Sometimes I find her comical.  Other times she really annoys me.

Since Y&R is a soap, Chelsea and Adam will eventually break up.  However, I don't trust Adam.  I don't think that he has fundamentally changed.  He's still hiding what happened in Vegas.  Yes, it will be interesting to find out what he and Chance cooked up there, but the writers are taking far too long to reveal what happened.  Also, it will be interesting to see Adam's reaction when he learns about Sharon's cancer.  Will it have a big impact on him?

I am also really looking forward to the Newman gala.  It should be fun.  Unlike you, I am not sick of the Kyle, Lola and Theo storyline.  but I often think it is too repetitious.  I realize the writers have to fill time but they can speed it up a little.  At any rate, it looks like the honeymoon is really over for Kyle and Lola.  There is a great deal of trouble in Paradise.  Snowflake and shifty Theo are waiting in the wings like vultures.


I had a conversation with longtime Y&R viewer, Fifi in Collingwood, Ontario   Fifi thinks that Nikki's nightmare is going to come true.  She thinks that Nick and Sharon are going to get together again.  I think that Fifi could be right.  Those two will always have a history.  They were married for ten years, which is a long time on a soap, and they had two children together.  They seem to be repeating the pattern of Nikki and Victor through the years, always breaking up and reuniting.


CAST NEWS
Christian Keyes to play a man from Amanda's past 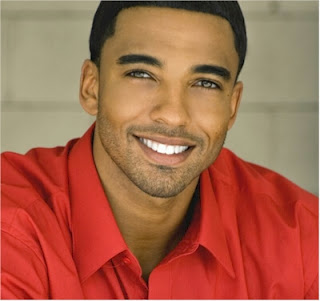 We're finally going to learn more about Amanda's (Mishael Morgan) mysterious past.  Christian Keyes is set to play Ripley Turner, Amanda's ex-fiance.  According to Devon Harmilton's dossier on Amanda, she has a restraining order against her ex.  He probably abused her.

Christian Keyes was born in Michigan on July 24, 1975.  He was a regular on the TV series Saints and Sinners.  He also had recurring roles on Legends of Tomorrow and Supernatural.  Christian will arrive in Genoa City on Wednesday, February 5, 2020 (CBS) and Tuesday, February 4th on Global TV in Canada.

Kirby Bliss Blanton, a 29-year-old from Texas, has joined the cast of Y&R as Lindsay, a new employee at Society, Abby's restaurant.  She may replace Tessa Porter, who has gone on tour with her ex-husband, singing star Tanner Watts (Chase Coleman).

Kirby had small roles in such TV series such as Zoey 101, Hannah Montana and Hawaii Five-0.  Her first feature film role was in the 2007 horror movie Scar.


Kyle Abbott (Michael Mealor) is torn between Lola and Summer, although he's starting to gravitate toward Summer.  Which one do you think Kyle is more suited to, fans, Summer or Lola?  Respond to the poll below and let me know.


Do you think Kyle is more suited to Lola or Summer?
Free Online Quiz Maker


That's all for now.  Don't forget that the next edition of Y&R Report will appear in this space on Saturday, February 15, 2020.  That's the day after Valentine's Day, which is always fun on the show.