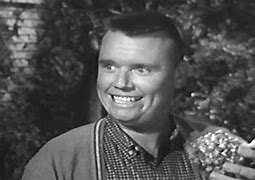 If Skip Young were alive today, he would be celebrating his 91st birthday.  Skip was born Ronald Bix Plumstead on March 14, 1930 in San Francisco, California.  He spent most of his life as an actor.  At the age of four, Skip made his show business debut with comedian Bert Lahr in a two-reeler movie entitled Mae West.  He eventually established a successful film and television career for himself.  However, he will always be best remembered for his role as Wally, the happy-go-lucky buddy of David and Ricky Nelson on The Adventures of Ozzie and Harriet.
Skip served in the United States Navy during the Korean War.  Before joining the staff of Ozzie and Harriet, he performed at Knott's Berry Farm's Bird Cage Theatre in Buena Park, California.  He was also a radio personality,  Skip's Ozzie and Harriet character, Wally, was a good-natured prankster.  The Nelson clan would often have to rescue their inept friend from his various misadventures and schemes.
Skip Young first appeared on The Adventures of Ozzie and Harriet as "Chubby" in a 1956 episode called "The Kappa Sigma Party (Season 5, Episode 1, Air Date: October 3, 1956).  His next appearance was as a bell hop in "A Doctor in the House" (Season 5, Episode 12, Air Date: December 12, 1956).  Skip's first appearance as Wally was in an episode entitled "The Duenna" (Season 5, Episode 19, Air Date February 6, 1957).
The plump, affable Wally had quite the appetite for desserts and he was very chatty.  He was given the last name "Plumstead," which just happened to be Skip Young's real surname. Wally also had a long-suffering girlfriend named Ginger, played by the late Charlene Salerno.  Charlene played Ginger from 1960 until 1965.  Skip, however, played Wally in several more episode and appeared in the final episode of the show, which is entitled "The Game Room" (Season 14, Episode 26, Air Date: March 26, 1966).
The Adventures of Ozzie and Harriet (1952-1966) wasn't the only long-running family comedy in which Skip appeared.  In 1960, he portrayed George Allison in an episode of Father Knows Best entitled "Bud Lives It Up (Season 6, Episode 30, Air Date: May 9, 1960).  He also guest-starred in a 1961 episode of My Throw Sons called "Mike in a Rush" (Season 1, Episode 17).  He played George Allison opposite series regular Tim Considine (Mike Douglas).
When Ozzie and Harriet ended its run after 14 seasons, Skip guest-starred in episodes several popular series such as .Green Acres (1968), Adam-12 (1969), Starsky and Hutch (1977).  His final acting appearance on television was as a coffee shop regular in a 1989 episode of Growing Pains entitled "Mike and Julie's Wedding"  (Season 5, Episode 2, Air Date: September 27, 1989).
Skip Young was married twice.  According to IMDb, he was married to Beverly Ruth Trout from January 18, 1959 until August 6, 1960 and to Carol A. Whitaker from May 25, 1961 until 1967.  Both marriages ended in divorce.
In 1973, Skip moved to the San Bernardino, California community of Apple Valley (145 kilometres or 90 miles east of Los Angeles).  He made the move to be near his daughter.  In his last years, he was a radio personality.  He also became involved in judging such events as beauty contests and chili cookoffs.
On March 17, 1993, Skip Young was found dead in the Apple Valley home he shared with his daughter.  He was 63 years old at the time of his passing.  According to San Bernardino deputy coroner Linda Myers, Skip's body was discovered by family members.  Myers stated that Skip had been in poor health for years "but death was very sudden."  She stated that he died of a heart attack and that diabetes was a contributing factor.  Skip's funeral was held at Our Lady of the Desert Catholic Church in Apple Valley on March 19, 1993.
When Skip Young died, his friend Buck Buchanan, who played a neighbour on Ozzie and Harriet, said this about him: :"He was jovial, lovable.  He was that kind of imp.  If he had been born earlier, he would have been Spanky McFarland.  He always had a joke and he was always laughing.  He was a very nice man."  It sounds like Skip's personality was very similar to that of his TV character, Wally.
END NOTES
* Skip Young played a captain in Wake Me When the War Is Over, a 1969 television movie starring Ken Berry, Eva Gabor and Jim Backus.  It was a comedy set in the final months of World War II.
* Skip portrayed Elvis Presley's best friend Teddy in the 1957 film Loving You.
* Charlene Salerno, (Ginger on Ozzie and Harriet) died on March 5, 1986.  Born November 19, 1938 in Los Angeles, she was only 47 years old at the time of her passing.  According to her brother, Mark Salerno, in a comment posted on the webpage "Remembering The Adventures of Ozzie Harriet," (March 30, 2016), Charlene died of breast cancer.
Charlene had very little screen acting experience prior to her role on The Adventures of Ozzie and Harriet.  Ginger was Charlene's only adult role.  As a child actor, she appeared in two films: The Gay Sisters (1942) and The Adventures of Mark Twain (1944).  She did not have any television or film roles
after her final appearance on Ozzie and Harriet in a 1965 episode called "Kris & the Queen" (Season 14, Episode 3, Air Date: September 29, 1965).
SOURCES: Los Angeles Times, obituary, "Skip Young; Co-starred in Ozzie and Harriet,'" March 21, 1993; Variety, "Skip Young of 'Ozzie and Harriet' dies," by Variety Staff, March 18, 1993; Desert News, obituary, "'Ozzie and Harriet' actor dies at 63," March 19, 1993; Wikipedia; Internet Movie Database (IMDb)
- Joanne
Posted by Joanne at 1:18 AM