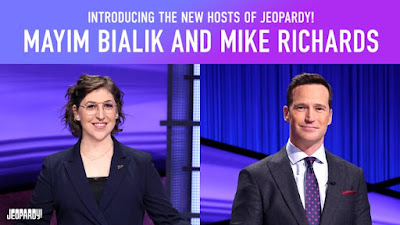 Well, Jeopardy! fans, the suspense is over.  The show has finally chosen a new host to replace the beloved Alex Trebek - excuse me, let's make that two new hosts.  Alex's shoes are hard to fill.

Yesterday, it was announced that executive producer Mike Richards and former Big Bang Theory star and neuroscientist Mayim Bialik will share the duties.  Richards will host the daily syndicated program, while Bialik will preside over prime time and spinoff versions, including the upcoming Jeopardy! National College Championship, scheduled to air on ABC in 2022.

Mike Richards will be the primary host and continue as executive producer for both the prime time and syndicated series of Jeopardy!  He will remain executive producer of Wheel of Fortune as well.  The choice of Richards is not surprising, but it is also not without controversy.  A decade ago, Richares was involved in a discrimination lawsuit concerning the decision to fire a Price is Right model who became pregnant.  He addressed the issue with a memo to Jeopardy! staff in which he wrote the following: "There were allegations made in employment disputes against the show.  I want you all to know that the way in which my comments and actions have been characterized in these complaints does not reflect the reality of who I am or how we worked together on The Price is Right.  I know firsthand how special it is to be a parent.  It is the most important thing in the world to me.  I would not say anything to disrespect anyone's pregnancy and  have always supported my colleagues on their parenting journeys."

That's fair enough.  Richards certainly has a perfect right to defend himself against allegations relating to the lawsuits.  Here's what bothers me and some other Jeopardy! fans.  There is little doubt that Mike Richards is a good game show host and that he does the job very well.  There was the appearance, that Richards, as executive assistant, chose himself as the host of Jeopardy!  Sony Pictures, of course, immediately assured everybody that that was not true.  According to CNN Business, he production company stated: "We knew early on that we wanted to divide the hosting responsibilities, and it became very clear that Mike and Mayim were the undeniable choices.  They were both at the top of our research and analysis."

Still, something does not seem entirely kosher.  One can't help but wonder if a second co-host, a woman, was chosen to deflect some of the criticism off Mike Richards.  Of course, the choice of Richards and Bialik could never have pleased everyone.  As always, with such matters, there is disappointment and dissatisfaction in some circles.  Some Jeopardy! watchers had hoped that The Greatest of All Time winner, Ken Jennings, would get the gig.  If it's any consolation, Jennings will return as consulting producer of the show. Meanwhile, other Jeopardy! viewers were disappointed that actor and television host LeVar Burton was not chosen.  It was impossible to please everyone and every candidate had flaws.