Keeping up with Ann Marshall 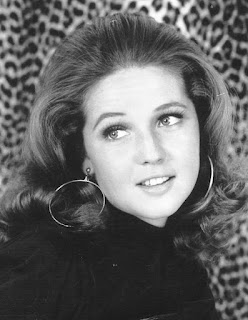 Ann Marshall was born Joann Marshall on July 17, 1946.  I haven't been able to find Ann's birthplace online.  Sources only say that she was born in the United States and that she lived in Illinois during her early childhood.  Ann began her show business career at the age of four at a local television station in Springfield.  She also sang regularly on a children's radio program in Peoria, Illinois called Juvenile Theatre.

In the 1960s, Ann moved to Hollywood, California.  She had a bit part in a 1960 episode of The Ann Sothern Show, in which she played "the daughter."  From 1961 to 1971, Ann made nine appearances in episodes of My Three Sons. For the final four of those episodes, she portrayed a character named Cynthia Wright.  Ann also guest-starred in episodes of Hazel (1962) and Vacation Playhouse (1963).

In 1963, Ann played the role of Angela Brown in three episodes of My Favorite Martian, including the very first episode of the series.  Her character, Angela, was the daughter of Mrs. Lorelei Brown (Panela Briton), the landlady of reporter Tim O'Hara (Bill Bixby).  Angela was a sweet teen who had a crush on Bill Bixby's character.  However, she was dropped from the show after only appearing in three episodes.  Her last episode was "Man or Amoeba" (Season 1, Episode 5, Air Date: October 27, 1963).

Ann Marshall also played Sissy Brennan a 1963 TV movie called Mickey and the Contessa.  Her co-stars were Mickey Shaughnessy and Eva Gabor. In this comedy of manners, Gabor portrayed a noblewoman, who after escaping from behind the Iron Curtain, can only find a job as a maid for the family of a high school gym teacher.

Ann married Edward Stephen "Eddy" Medora on January 16, 1971.  Eddy Medora, born in Los Angeles in 1945, was a guitarist, saxophone-player, singer and songwriter.  He played guitar for the Sunrays, a band from Pacific Palisades, California, with a close association to the Beach Boys.  The Sunrays broke up in 1967 and Medora moved on to a successful career as Director of National Sales for Walt Disney Records.  He retired in 2002 and began to paint portraits, which were very popular in Beverly Hills.

Ann's marriage to Eddy lasted until his death on October 27, 2006.  The couple had two children, a son, Christopher and a daughter., Nicole.

On her official website, Ann Marshall says that she "still goes out for interviews for voice-overs and on-camera jobs."  She plays a lot of tennis and has participated in many celebrity tournaments (She won the Steve Garvey Celebrity Tennis Tournament twice in a row).  Ann also does some travelling.

* Ann became the first female newscaster in Los Angeles when she wrote and broadcast the news on KHJ TV Channel 9.

* Ann has appeared in more than 150 American commercials and she served as the spokesperson for Carrow's Restaurants for over five years.  She has also done over 200 voice-overs.

* Ann was the lead singer for a group called Heaven Bound, which had three charted records.

Below is a more recent photo of Ann Marshall.