Keeping up with Cindy Sampson of Private Eyes 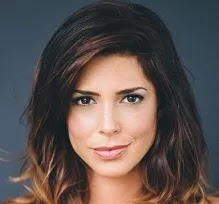 Fans have been watching the fifth and final season of the Canadian detective series Private Eyes, which debuted in 2015 on Global TV.  The show stars Vancouver-born Jason Priestly and Cindy Sampson.  Cindy portrays Angie Everett, a private investigator, who takes on a former hockey player, Matt Shade (Priestly) as her junior business partner.  I enjoy the series, as well as the romantic chemistry between Shade and Angie (fans have nicknamed them "Shangie.").  Private Eyes is set in Toronto, Ontario, my hometown, so I have fun identifying the city's landmarks.

While in high school, Cindy appeared in Street Cents, the award-winning Canadian consumer show for teens.  The show won several Gemini Awards  in Canada, as well as an International Emmy Award.  For Cindy Sampson, it was a stepping stone to a television career.

Cindy won critical acclaim for her performance as Zoe Ravena in the drama thriller Live Once, Die Twice, a 2006 Canadian television film.

From 2006 to 2007, Cindy portrayed Sandra MacLaren in eight episodes of the short-lived CBC comedy-drama Rumours.  The show focused on the co-editors of Rumours, a struggling women's magazine in Toronto.

From 2007 until 2011, Cindy had the recurring role of Lisa Braeden in 11 episodes of Supernatural, an American fantasy-horror TV series about two brothers who fight demons and monsters and all sorts of other evil beings.

Cindy starred in the 2010 Canadian television horror film The Shrine.  The film is about some journalists who travel to a remote village in Poland to investigate a string of mysterious disappearances.  To prepare for her her role in The Shrine, Cindy was required to view a number of horror films from a prepared list.

Cindy played Molly Crocker in five 2009 episodes of the Canadian crime-drama series Durham County.  She also guest-starred as Jaime Toth in three 2015 episodes of Rookie Blue, a Canadian police drama.  From 2015 to 2016, Cindy had the recurring role of Sophie Hale in eight episodes of The Rogue, a crime-drama.  The Rogue was a Canadian-British-American co-production, filmed in Vancouver and set in Northern California.

In 2019, Cindy appeared in two episodes of the crime-drama series Hudson and Rex.

Cindy is married to Ryan Wickel, a Canadian home decorator and refurbisher, who is based in Toronto.  From 2002 to 2006, Ryan attended Wilfrid Laurier in Waterloo, Ontario.  In 2011, he attended Lakeland College in Alberta.

Cindy and Ryan tied the knot in a small, private ceremony in Las Vegas, Nevada  on July 7, 2016,  They later invited close relatives and friends to a wedding reception party at a seashore club in Hubbards, Nova Scotia, on August 12, 2016.

* Cindy Sampson appeared in a TV commercial for Crest toothpaste in which she "flexed" her arm muscles.

* After five season, Global cancelled Private Eyes.  Tony Reeb, the executive vice-president of  broadcast  networks at Corus Entertainment, stated that the company had spoken with producers and they decided that the show "had hit its creative arc" and "wanted the show to go out on top."  Jason Priestly, however, described the cancellation as a "great surprise" to the cast and crew of the series.  He opined that Private Eyes had more life left in it.  "I'm very sad to see the show coming to an end.  I wasn't ready to be done with the show. I don't think any of us were," he said.

Jason was one of the producers who developed Private Eyes from the novel The Code by G.B. Joyce.  He also directed some of the episodes of the series.

* In February of 2012, Cindy Sampson travelled to Bouvet Island in the South Atlantic Ocean, an uninhabited subantarctic volcanic island, which also happens to be the most remote island in the world.  She climbed the island's summit while filming the "docu-fiction" movie Expedition for the Future."