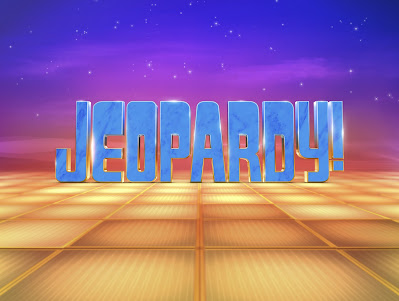 As regular readers of TV Banter know, Jeopardy! is my favourite game show.  Here's the latest Jeopardy! news as fans wait for a new host to replace the last Alex Trebek.  The show has been without a permanent host since Trebek died of pancreatic cancer last November.

* According to Variety, Jeopardy!'s executive producer, Mike Richards, has been in advanced negotiations for the prestigious job.  However, the show declined to comment on whether Richards, who guest-hosted the show from late February to early March, is in negotiations.  Variety reported that Sony Pictures Television, which produces Jeopardy!, was impressed with Richards' style and his on-air comportment.  Nevertheless, a spokesperson for Sony Pictures said that there were ongoing discussions with other potential candidates for the position.

After watching Mike Richards' performance as guest host, I was also impressed with him.  In fact, on January 24, 2921, I posted an entry on my blog saying that he would make an excellent permanent host for the show.  Since then, certain factors have come to light which have altered my opinion.  Variety reported that Richards was named among the defendants in multiple discrimination lawsuits filed during decade-long run as producer of The Price is Right, including one in 2010, from Price is Right model Brandi Cochran.  Cochran accused Richards of firing her because of a difficult pregnancy.  In 2011, another Price is Right model, Lanisha Cole, stated that she was wrongfully fired and that she had been the victim of sexual harassment on the set of the popular game show.  In 2013, Richards was removed as a plaintiff in Cole's suit.  The case was eventually settled outside of court.

There isn't a great deal of information available about Mike's personal life.  He appears to be a very private person.  According to Wikipedia,  however,. Mike and his wife, Stephanie, have two sons.  Although I am still quite impressed with Richards' on-air manner and the way he conducts game shows, I think Jeopardy! should take a very careful look at his character and his personal integrity, as well as the past allegations against him, before naming him the successor of Alex Trebek.  It's time to hold back before announcing a final decision.  What if more allegations arise.  The last thing Jeopardy! needs is a huge scandal involving its new host.  There are certainly other excellent candidates to consider if Richards is not a suitable choice.

* Jeopardy! contestant Matt Amodio is making waves and he definitely has fans' tongues wagging.  Matt seems unbeatable right now.  He appears to be the best player in years, another Ken Jennings in the making.  The Yale University Computer Science Ph.D student from New Haven, Connecticut has already ensured a spot for himself on the quiz show's all-time winnings list and a place in the game show's Hall of Fame.

Matt said that his first win was the sweetest of them all.  He stated, "Once you [win] once, that's just such a great accomplishment.  Nobody can ever take that away from you."

As of this writing, Matt Amodio is the fourth-highest champion in Jeopardy! history.  He had his 14th consecutive victory yesterday (August 9, 2021) and has amassed winnings of $440,600 so far.  There is no doubt that Amodio is a very highly skilled Jeopardy! contestant.  His mind is a treasure trove of knowledge.  However, he does have one bizarre quirk that has driven some Jeopardy! fans crazy.  When an answer is a person, he uses "what" instead of "who."  This caused one Twitter user to asked, "Is Matt the most annoying contestant ever?  Is it so hard to say "who is" or "make it a true daily double."

Matt's weird quirk doesn't bother some Jeopardy! fans, but I have to admit that it bothers me.  I admire Matt's talent as a player, but I also find Matt's quirk rather annoying.  For some reason, it gnaws at me, like the scratching of a chalkboard.  Nevertheless, he's already one of the most dominant Jeopardy! contestants ever.  It will be fascinating to watch how far he can go.