Hi fans,
There has been a week of a high drama on the Y&R, with a great deal of action and excitement.  Ashland Locke finally admitted his dirty deeds to Victoria.  She finally told him, in no uncertain terms, that she couldn't accept any more of his lies and deceptions.  Then she drove into that fateful foggy night in Genoa City, but not before smashing that portrait of herself.   I wonder if it will be repaired or if Victor's infamous portrait will return.  Maybe there will eventually be a painting of Adam hanging on that wall.
So, now we know how Rey (Jordi Vilasuso) exited the show.  He died in a three-car crash, also involving Victoria. and Ashland.  Ashland rescued Victoria and they survived with some minor injuries. I know we're talking about a soap, but I have a couple of questions to ask about the credibility of that storyline.  Wouldn't Rey have cancelled the trip to Chicago with Conner and Chelsea, given the fog and the dangerous driving conditions?   How likely would Victoria be able to find an unlocked cabin out of the blue?
There will be many repercussions from Rey's death.  Sharon, of course, will be a grieving widow for a while.  However, it's obvious that she will eventually become romantically involved with Nicholas Newman again.  However,  I can foresee a triangle with those two and Chelsea.  Chelsea has been involved with Nick in the past and she will probably go after him again, especially since Adam and Rey are out of the picture.  Chelsea will need a storyline and it can't all be smooth sailing for Sharon and Nick.
I think Nick may become chummy with young Conner Newman and help him get over the loss of Rey.  He may volunteer to take Conner to hockey games, especially since Adam is too busy with Newman business and cavorting with Sally Spectra.  Unlike Rey, Nick is not married to Sharon, so Chelsea will consider him fair game. You can see this dynamic already because the two women have had tensions over Chelsea's relationship with Rey.  They seem destined to become romantic rivals.  If something goes wrong between Adam and Sally, then Adan will probably turn to Sharon again, making the romantic entanglements even more complicated.  He's been so involved with Sally, that he hasn't paid much attention to Sharon.  That may change now that Sharon is unattached again.
The death of Rey will also affect Chance's storyline.  It will probably mean that Chance will be the major police officer on the show.  I would love to see Doug Davidson return as Paul Williams, but I can't see that happening.  After the way he was treated, Doug is most likely done with the show for good.  I would feel the same way if I were in his position.
I don't expect that Ashland Lock will be leaving town anytime soon.  It looks as if he'll be sticking around for a while.  Victoria obviously still has feelings for him and she was impressed by the way he saved her life..  However,, she won't easily forget his deceit and his lies about having cancer.  So, she will probably be conflicted and confused.  She may gravitate toward Billy Abbott again, which is definitely going to cause problems for Lily.  Lilly and Billy are too happy right now for a soap couple, so their relationship needs to be threatened.
It's also about time that Dr. Nate and Elena encountered some trouble in paradise.  The trouble will be caused by Amanda's sister, Imani.  According to an online spoiler, Imani will try to "work her charms" on Nate.  Imani has had her eye on the doctor since she met him.  This has been brewing for a long time now.
CAST NEWS
Christel Khalil (Lily Winters) is engaged 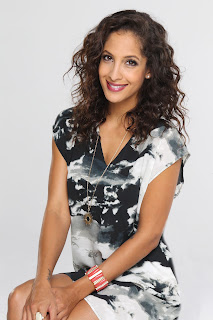 Christel Khalil, who has portrayed Lily Winters on Y&R for several years now, is engaged.  Christel took to Instagram to announce her engagement to longtime boyfriend, Sam Restagno.  She shared photos of the couple, showing off her glittering engagement ring.  "A couple months ago, I said yes to the love of my life," she wrote.
Christel and Sam, a Canadian businessman, began dating in 2016.  Restagno is Managing Partner at Golden  Spruce Capital based in Toronto.
This will be the second marriage for Christel, 34, who was married to musician Stephen Hensley from 2008 until 2011.  Christel and Hensley have a son, Michael Coden Hensley, who was born in 2010.  Bryton James (Devon Hamilton on Y&R) is Michael's godfather.
Snowflake returns: The role of Summer has been recast
It's official.  A new Summer Newman will arrive in Genoa City.  Allison Lanier will take over the role from Hunter King, who played Summer from 2012 to 2021 and received two Daytime Emmy nominations.  Hunter left Y&R due to a contract dispute.
Allison Lanier was born in North Carolina and she played Anabelle in the Amazon series Red Oaks.  She also appeared as Bella in the 2018 film Fish Bones and as Anna in the 2019 thriller Mia.  Allison is scheduled to make her first appearance on Y&R sometime  in May.
CAST NOTE
Peter Bergman (Jack Abbott) and Susan Walters (Diane Jenkins) were guests on the Monday, April 18th episode of The Talk.  I must say that they both seem very excited about their storyline, especially Peter..  The return of Diane is probably the best thing to happen to Jack's storyline in years and it has so much potential  Peter is also quite pleased about the return of his TV son, Kyle Abbott, played by Michael Mealor.  He had nothing but praise for Mealor.
Y&R REPORT READER'S POLL

Everyone in Genoa City loved Rey Rosales.  He was an all-round good guy.  Jordi Vilasuso, who played Rey, was suddenly let go and written out of the show.  To be honest, I was surprised because he seemed to have a new storyline involving Chelsea.  Rey was the last of three Rosales siblings still in Genoa City.  We won't see him again - unless the writers decide to bring him back from the dead some day.  Fans, how do you feel about the departure of Rey?  Will you miss him.?  Reply to the poll below and let me know.
NOTE TO READERS
I need your feedback.  If you have any comments on Y&R, please email them to me with "Viewer Forum" in the subject line. I will be happy to publish your comments and reply to them  You do not have to use your real name.  I really need your input.  I really need to hear your opinion.  I want to know if you agree or disagree with me.
My email address:  jmadden16@yahoo.ca
That's all for now.  Don't forget that the next edition of Y&R Report will appear in this space on Saturday, May 7, 2022,
Take care,
Joanne
Posted by Joanne at 11:41 AM