Linda Lavin and the cast of Alice 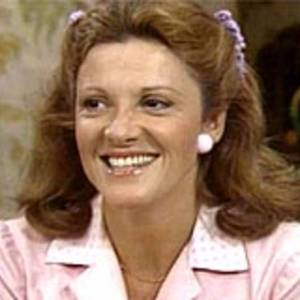 So many women identified with the character, the person of Alice because they, in fact, were Alice. They were single mothers and working women. She represented 80% of the women who work in this country and she still does. Women who are still not getting equal pay for the equal quality of work they do. It was a huge success, not only because it was in a great time slot, but because it was something that everybody in America, families and working people, identified with the characters and the situation. It was a very powerful experience for me, for all of us. To have a nine-year hit in television is very rare and I was very grateful for it. It changed my life in many ways.
- Linda Lavin
Interview with Gregg Shapiro, Baltimore Outloud, April 20, 2020

Actor-singer Linda Lavin has been a prolific entertainer on television and in the theatre for decades..  Linda was born in Portland, Maine on October 15, 1937.  She is the daughter of David Joseph Lavin, owner of a furniture business, and Lucille (née Potter), an opera singer and local radio show host.  Her family was active in the local Jewish community.  In 1959, Linda graduated from the College of William and Mary in Williamsburg, Virginia, where she was awarded a Bachelor of Arts degree in theatre arts.

After graduating, Linda moved to New York City to try her luck on Broadway.  She struggled to find success in musicals but was disappointed in her uninspired female roles.  She turned to more dramatic roles and won rave reviews for her work.  She received a Tony Award nomination for Featured Actress in Last of the Red Hot Lovers.

In 1967, Linda appeared in a television version of the musical Damn Yankees!, starring Phil Silvers and Lee Remick.  By 1973, she had moved to Hollywood to launch a television career.  She appeared in episodes of such shows as Rhoda (1974), and Harry O (1975).  From 1975 to 1976, Linda had a recurring role as Detective Janice Wentworth on Barney Miller, the comedy-drama police series starring Hal Linden and Abe Vigoda.

Linda Lavin left Barney Miller to play the lead on the sitcom Alice, the role for which she is best known.  The television series ran for nine seasons (202 episodes), from 1976 to 1985 on CBS.  It was based on the 1974 film Alice Doesn't Live Here Anymore, which starred Ellen Burstyn in the title role of Alice Hyatt.  On TV, however, Linda portrayed Alice, a single mother who works hard at Mel's Diner so that she can support herself and her young son.  An aspiring singer, the widowed Alice waits on tables at the greasy spoon in order to meet her expenses.

In a 2020 interview with Gregg Shapiro for Baltimore Outloud, Linda said that she loved the film Alice Doesn't Live Here Anymore. She described it as "a unique movie whose time had come to tell the story about single mothers, working women."  Of the film's television adaptation, she said the following: "The right place for it to be was television.  We had more than 40 million people a week watching us."

From 1991 to 1992, Linda starred in the short-lived ABC sitcom Room for Two, along with Patricia Heaton of Everybody Loves Raymond fame.  Linda portrayed the widowed Edie Kirkland, who moves in with her daughter, Jill, played by Heaton.

Below is a 1991 press photo of Linda Lavin and Patricia Heaton for Room for Two. 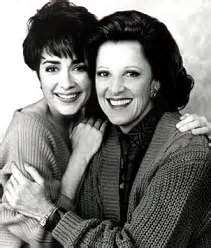 Beginning in the 1990s, Linda began to take on more Jewish roles on television, particularly Jewish mothers.  She co-starred with Nasttasja Kinski and Michael York in the 1996 TV film of Danielle Steeles' The Ring.  Linda played Ruth Leibman.in this World War II, historical romance.  In 2018, she appeared as Florie Bloom in the comedy Conrad Bloom, alongside Mark Feuerstein in the title role.

From 2013 to 2014, Linda portrayed Lorna Harrison on all 15 episodes of the short-lived NBC series Sean Saves the World.  She also appeared in a 2018 episode of Madam Secretary and in episodes of the Netflix series, The Santa Carita Diet.  Linda Lavin has never stopped working.  She currently appears in B Positive, a comedy-drama about a divorced dad who needs a doner for kidney transplant and finds a volunteer in a woman from his past.  Linda plays Norma, one of the senior citizens at a local retirement home.  B Positive premiered on CBS on November 5, 2020.  As of this writing, the show has not been cancelled or renewed for a third season,

Linda Lavin has been married three times and divorced twice.  On September 7, 1969, she married actor Ron Leibman.  The marriage ended in divorce in 1981.  On August 22, 1982, Linda wed another actor, Kip Niven, whom she met on the set of Alice, and became stepmother to his two children..  In 1992, she divorced Niven for reasons of mental and emotional cruelty and adultery.

On Valentine's Day 2005, Linda married ger current husband, actor Steve Bakunas.  Steve is also an artist and musician.  Linda first started contacting Steve online in 1999, after a friend suggested that he might be able to help her with foundation for inner city girls.  She then went to an opening night theatre performance and he was seated in the next row.  She was immediately struck by him.

WHAT HAPPEND TO THE CAST OF ALICE?

PHILIP McKEON (Tommy Hyatt):  Child star Philip Mckeon  portrayed  Alice's son,  Tommy Hyatt.  Linda Lavin noticed him at a Broadway performance of Medea and Jason (1974) and recommended him for the part of her TV son, Tommy.  After Alice ended its run in 1985, Philip made periodic acting appearances and he was one of the producers of the 1994 action-comedy film Teresa's Tattoo, featuring his younger sister, Facts of Life star Nancy McKeon.  After the year 2000, he worked in radio, first in Los Angeles and then in Texas.  Sadly, Philip McKeon passed away after a lengthy illness on December 10, 2019.  He died in Texas at the age of 55.

Although best known for his role as Mel, Vic appeared in numerous TV shows.  He began his television career in 1958 and guests-starred on numerous television series including The Mary Tyler Moore Show, Columbo, Bonanza and Star Trek.  He also was also a notable film and theatre actor.  His film credits include Bullitt (1968) and All Dogs Go to Heaven (1989).  Vic Tayback died of a heart attack in Glendale, California on May 25, 1990.  He was 60 years old. 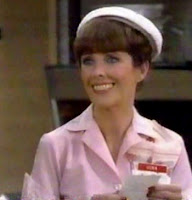 BETH HOWLAND (Vera Goman): Beth Howland was an actress of stage and television.  A talented singer and dancer, Beth appeared in Broadway musicals before moving to California.  During her TV career, Beth guest-starred in episodes of a number of shows such as The Mary Tyler Moore Show, Eight is Enough, Cannon, Little House on the Prairie and The Love Boat.  However, she is best known for her role as the somewhat ditzy, accident-prone waitress, Vera Goman on Alice.  Beth remained on Alice for all nine seasons of the series.  After the show ended, she went into semi-retirement.
Beth was married twice.  From 1961 to 1969, she was married to actor Michael J. Pollard, with whom she had a daughter, Holly.  In 2002, she wed actor Charles Kimborough, who played anchorman Jim Dial on Murphy Brown.  Beth Howland died of lung cancer on December 31, 2015.  She passed away in Santa Monica, California at the age of 76.  In keeping with Beth's wishes, Kimborough did not report her death to the media until May 24, 2016. 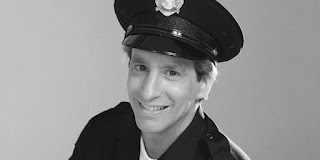 CHARLES LEVIN (Elliot Novak). From 1983 to 1985, Charles Levin portrayed Elliot Novak, who became the husband of Vera Goman, in 25 episodes of Alice.  Charles Levin also played the model in the 1993 "The Bris" episode of Seinfeld.  Charles also had the recurring role of Eddie Gregg on Hill Street Blues.  He made numerous guest appearances in episodes of series such as Family Ties, The Facts of Life, Falcon Crest and Night Court.
On July 8, 2019, Levin was reported missing to the police.  At the time, he lived in Oregon and his car was found on a remote road in Selma, Oregon.  A day later, his body was discovered.  On November 8, 2019, authorities declared his death to be accidental as he had apparently fallen down an embankment while trying to to find help.  Charles Levin was 70 years old at the time of his death.

* Linda Lavin's first husband, Ron Leibman, died from complications of pneumonia at the age of 82.  Her second husband, Kip Niven, died of a heart attack that same year.  He was 73 at the time of his passing. Linda's two ex-husbands, as well and her Alice co-stars Philip McKeon and Charles Levin.

* In January 2011, Linda was inducted to the American Theater Hall of Fame.

* In 2012, Ghostlight Records released a recording by Linda called Possibilities.

* Linda has been nominated for five Tony Awards  She has won once, for Best Performance by a Leading Actress in a Play, for Broadway Bound in 1987.  She has also won two Golden Globes for Best TV Actress in a Musical or Comedy, for Alice in 1979 and 1980.