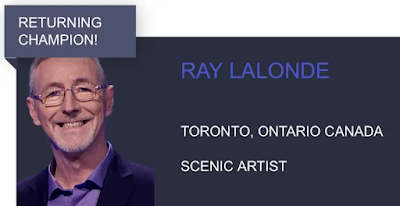 Earlier this year, Mattea Roach, a 23-year-old Toronto-based legal tutor, originally from Nova Scotia, appeared on Jeopardy!  Mattea won 23 consecutive games, the fifth-longest streak in the popular quiz show's history.  She won more games than any other Canadian contestant, and she also collected winnings of  US$560,983, the equivalent of more than 750,000 in Canadian dollars.  Her run ended on May 6, 2022, when she was defeated in her 24th match by only $1,

In September of 2022, Mattea was chosen as the new host of The Backbench, a biweekly political interview podcast from the Canadaland network.  On October 26th, she celebrated her 24th birthday.

Mattea competed in Jeopardy!'s tournament of champions, which aired in November 2022.  She lost in the semi-finals, after defeating fellow champions Matt Amodio and Amy Schneider in a warm-up exhibition contest. On The Jeopardy! Tournament of Champions, Mattea was introduced as a writer, rather than a tutor.

As of this writing, another Canadian, Ray Lalonde, is the current Jeopardy! champion.  He won his tenth consecutive match in the episode that aired yesterday.  Ray was born and raised in Thunder Bay, Ontario.  He is a scenic artist in IATSE {The International Alliance of Theatrical Stage Employees)  He has worked on many art department sets, including those of the hit series The Handmaid's Tale, which is filmed in Toronto.  He told host Ken Jennings that he has an identical twin brother who has also auditioned for the show.

Ray Lalonde has already secured a spot in the next Jeopardy! Tournament of Champions  It will be interesting to see how far his win streak will last.  I'm cheering for him.