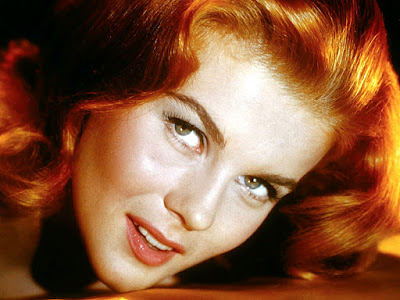 Ann-Margret celebrates her 75th birthday today.  The Swedish-American actress and singer is well known for her performances in such movies as Bye Bye Birdie (1963), Viva Las Vegas (1964), The Cincinnati Kid (1965), Carnal Knowledge (1971) and Tommy (1975).  However, she has also made her mark on television, particularly in made-for-TV movies and mini-series  This article will focus primarily on her TV performances.

Ann-Margret does have a last name.  She was born Ann-Margret Olsson in Valsjöbyn, Jämtland County, Sweden on April 28, 1941.  In her autobiography, Ann-Margret: My Story, she wrote that she dropped her last name because "I didn't want my parents to feel embarrassed if there was negative publicity from my being in show business."

According to her official website, Ann-Margret immigrated to the United States with her mother when she was five years old, settling in the Chicago area.  She attended Northwestern University and then moved to Las Vegas to pursue a singing career.  She performed in comedian George Burns' Vegas show and it was her association with Burns that led to her appearance on Jack Benny's television show.

Ann-Margaret was a guest on The Jack Benny Program in an episode that aired on April 2, 1961 (Season 11, Episode 24). Jack introduced the 19-year-old newcomer. and she sang "I Ain't Got Nobody."  Comedian George Burns, who was also a guest on Benny's show, came out and demanded a park setting for the young singer's second number on the program.  Jack brought out a park bench and Ann-Margret sang "Have a Good Time." Below is a video of her rendition of "Have a Good Time" in 1961.


In 1963, Ann-Marget voiced a cartoon image of herself  in a well-known episode of the popular animated series The Flintstones entitled "Ann-Margrock Presents (Season 4, Episode 1, Air Date: September 19, 1963).   It's one of my favourite Flintstones episodes and the most vivid representation I have of Ann-Margret on television.  In the episode, "Ann-Margrock" is brought to the Flintstone home by happenstance (a flat tire) and she is unrecognized by Fred Flintstone and his best friend, Barney Rubble.  She calls herself "Annie" and looks after baby Pebbles Flintstone.  I always remember the beautiful lullaby she sings to Pebbles called "The Littlest Lamb"   Later, as "Ann-Margrock," she belts out "I Love You But I Ain't Gonna Be A Fool." at the Bedrock Bowl.  She even does a little soft shoe with Fred and Barney. 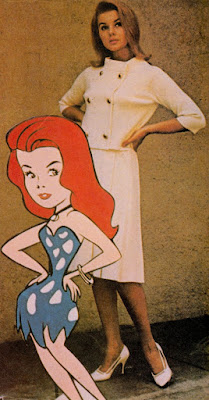 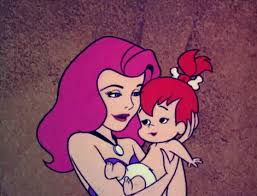 Ann-Margaret had her own CBS television special, The Ann-Margret Show.  It aired on December 1, 1968 and featured guest stars Bob Hope, Jack Benny. Danny Thomas and Carol Burnett.  Another CBS special followed with Dean Martin and Lucille Ball.  It was titled Ann-Margret: From Hollywood with Love and it aired on December. 6, 1969. 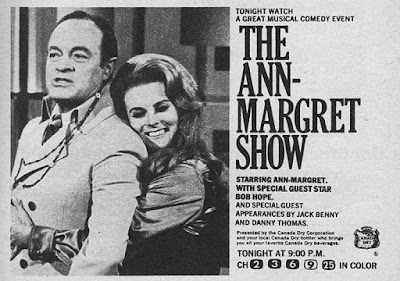 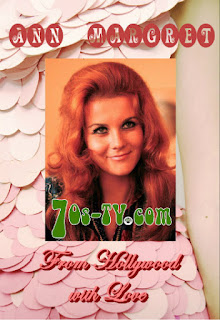 Ann-Margret guest-starred as herself in a 1970 episode of Here's Lucy with Lucille Ball. In the episode, entitled "Lucy and Ann-Margret" (Season 2, Episode 20, Air Date: February 2, 1970), Lucy's son, Craig (played by her real-life son Desi Arnaz, Jr.), decides he wants to be a songwriter, much to the disappointment of his mother who wants him to become a doctor.  Craig writes a song, "Country Magic," which impresses Ann-Margret. She wants to perform a duet with him on her upcoming television special.

In the 1980s, Ann-Margret continued to take roles in television movies.  She starred as Lucile Fray in Who Will Love My Children, a 1983 drama based on the true story of a dying Iowa farm wife and mother of ten children whose last wish was to find good homes for her children.  She also portrayed Blanche DuBois in a 1983 TV version of Tennessee Williams' A Streetcar Named Desire and Ann Arden Grenville in 1987's The Two Mrs. Grenvilles.  Hollywood leading lady Claudette Colbert starred with Ann-Margret in The Two Mrs. Grenvilles, a TV miniseries based on a Dominick Dunne novel about a sensational 1955 murder case.

In the 1990s, Ann-Margret was cast in a number of television films and mini-series.  She portrayed Luanne Barnes in the 1991 TV movie Our Sons, in which she and Julie Andrews are the mothers of gay partners, one of whom is dying of AIDS.   She played the role of  Sally Jackson in Queen, a 1993 mini-series about the owner of a Southern plantation owner who falls in love with a slave named Easter.  The plantation owner and Easter have a daughter named Queen who faces the struggle of fitting in as a mixed-race female in the South.


Ann-Margret also played the role of Belle Watling in the four-episode, six hour mini-series Scarlett, based on Alexandra Ripley's book of the same name, a sequel to Margaret Mitchell's Gone With the Wind.  Scarlett aired in 1994 and it starred British actress Joanne Whalley as Scarlett O'Hara and Timothy Dalton as Rhett Butler.

In 1994, Ann-Margret appeared as Carol Stevens in the made-for-television movie Nobody's Children and as Lena in Following Her Heart, another TV film.  She had the lead role of Diane Kay Borchardt, in a 1996 two-episode mini-series called Seduced by Madness: The Diane Borchardt Story.  It is a true crime story that chronicles the life of a Wisconsin teacher's aid who recruits teenage students to murder her estranged husband.

Ann-Margret starred as Amanda "Maggie Wyatt" in Four Corners a disastrous prime time drama series that only lasted for two episodes, from February 24, 1998 to March 3, 1998. She also played the title role of English-born American socialite Patricia Harriman in the 1998 mini-series entitled Life of the Party: The Patricia Harriman Story.  In 1999, she appeared as Lorraine Petrovitch in the television movie Happy Face Murders.

Ann-Margret has remained active in the 21st century.  She guest-starred as Angela Britton in an episode of the TV series Touched by an Angel.  The episode is entitled "Millenmium" (Season 6, Episode 11, Air Date: January 2, 2000).

She played Nedra Paugh in a year 2000 TV movie called Perfect Murder, Perfect Town, JonBenét and the City of Boulder, the story of six-year-old JonBenét, a child beauty pageant winner, who was murdered in her Colorado home.  She also played Cinderella in the 2000  family adventure min-series The 10th Kingdom and made a guest appearance in the comedy/drama Popular.  Believe it or not, she played God in a episode of the series entitled "Are you there God?  It's Me Ann-Margret" (Season 2, Episode 9, Air Date: December 8, 2000).

In 2001, Ann-Margrret appeared as Della Monroe  in a television min-series called Blonde, a fictional biography of Marilyn Monroe.  She also played the role of Claire Anders-Blackett in a 2001 TV movie entitled A Woman's a Helluva Thing, the story of a man who discovers he has a lot in common with his deceased mother.

Ann-Margaret starred in a 2004 television movie drama called A Place Called Home.  She portrayed a Southern Belle named Tula Jeeters.  In 2010, she appeared as Rita Wills in an episode of Law & Order: Special Victim's Unit.  The episode is entitled "Bedtime" (Season 11, Episode 18, Air Date: March 31, 2010.  In 2010, she also made guest appearances as Aunt Edie in the drama Army Wives ("Gun and Roses," Season 4, Episode 5, Air Date: May 9, 2010.) and as Margot Wilton in  CSI: Crime Scene Investigation ("Squeegel" Season 11, Episode 4, Air Date: October 14, 2010).  Her performance on Law & Order SVU earned her an Emmy Award for Outstanding Guest Actress in a Drama Series.

*  Ann-Margret has been married to American actor Roger Smith since May 8, 1967 and the couple will soon celebrate their 49th wedding anniversary.  Smith starred in the TV detective series 77 Sunset Strip and the comedy Mister Roberts.  Now 83, he suffers from myasthenia gravis, a neuromuscular disease that causes muscle weakness and fatigue. Ann-Margret has said that she knew on the third date that she was going to marry him.

*  Ann-Margret does not have any biological children.  She is, however, stepmother to Roger's three children (daughter Tracey and sons Jordan and Dallas) from his first marriage.to Australian-born actress Victoria Shaw. That union lasted from 1956 to 1965.

*  Ann-Margret published a 1994 autobiography called Ann-Margret: My Story (with Todd Gold), G.P. Putnam's Sons: New York, N.Y.  In her memoir, she revealed her battle with alcoholism and her ongoing recovery. 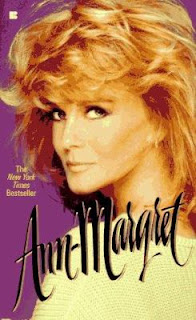 *  Ann-Margret maintained a life-long friendship with Elvis Presley, with whom she starred in the 1964 film Viva Las Vegas.  There was much speculation and publicity about the relationship between them. In her autobiography, she wrote very little about her romance with Elvis, although she referred to him as her "soulmate."  She and Roger Smith attended Elvis' funeral in 1977.

*  Ann Margret has has had two terrible accidents.  On September 10, 1972, she survived a fall from an elevated stage during a concert in Lake Tahoe, Nevada.  She suffered a broken arm, facial bone fractures and a concussion and she required reconstructive facial surgery.  On August 19, 2000, Ann-Margret, a motorcycle enthusiast, broke three ribs and fractured her shoulder when she was thrown off the motorcycle she was riding in Minnesota.

*  Ann-Margret received an Academy Award nomination for Best Supporting Actress for her role as Bobbie, the girlfriend of the abusive Jonathan Fuerst, Jack Nicholson's character in the 1971 Mike Nichols film Carnal Knowledge.

*  Ann-Margret was awarded a star in the Hollywood Walk of Fame in 1973.