Phil Donahue: His talk show and his marriage to Marlo Thomas 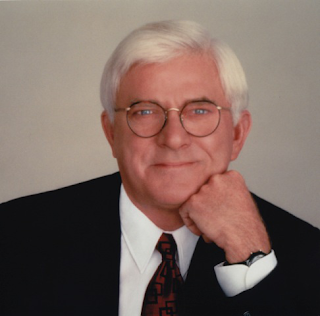 Before Oprah Winfrey, there was Phil Donahue.  For 29 years, from 1967 until 1996, Phil was an innovator on daytime TV.  After hosting a local show in Dayton, Ohio for three years, he began a remarkable 26-year run on national (U.S.) television as the creator and star of The Phil Donahue Show, also known as Donahue.  The bespectacled man with the thatch of white hair resided over the longest-running syndicated talk show in American television history.  He received 20 Emmy Awards - nine as host and 11 for the show.

Known for his liberal views, Phil was a trailblazer in American talk television.  He pioneered the concept of audience participation on his show.  He took his microphone into a gathering of people and allowed them to ask questions and to express their opinions.  In January of 1996, when Phil announced that he was ending his show, Oprah released the following statement: "Phil really opened the door to this genre, and for that, I am grateful. I have said from the very first day of my show, if there hadn't been a Phil, there wouldn't have been a me."

How did Donahue come up with the idea of allowing his audience to participate in his discussions?  In a 2001 interview for the Archive of American Television, he made the following comment: ". . . I realized during the commercials that these people in the audience were asking better questions than I was.  I went out in the audience and it saved us.  There would have been no Donahue show without that studio audience."

Philip John "Phil" Donahue was born in Cleveland, Ohio on December 21, 1935.  He came from an Irish Catholic background.  His father, Philip, was a furniture salesman and his mother, Catherine was employed as a shoe clerk.  Young Phil was an altar boy, loved baseball, drew cartoons for the school newspaper and played clarinet in the school band. In 1953, he graduated from St. Edward High School, an all-male Catholic college prep high school located in the Cleveland suburb of Lakewood, Ohio.  He then enrolled at Notre Dame University in South Bend, Indiana, earning a Bachelor of Business Administration degree in 1957.

After graduating from Notre Dame, Phil aspired to a career in broadcasting.   In the summer of 1957, he worked as a replacement announcer at KYW-AM and KYW-TV in Cleveland.   Seeking a more stable job, he moved to Albuquerque, New Mexico, the hometown of his then-girlfriend, Margaret "Margie" Cooney.  Unable to find permanent employment as a broadcast journalist, he took a job as a cheque sorter at a bank in Albuquerque.

On February 1, 1958, Phil married Margie Cooney.  He then returned to Cleveland's KYW-TV as a substitute announcer for the summer.  In late 1958, he joined WABJ, a small radio station in Adrian, Michigan, where he served as the stations's program and news director.  Donahue was eventually hired as a newscaster by WHO TV in Dayton, Ohio.  At WHO, he hosted a phone-in talk show called Conversation Piece in which he interviewed civil rights leaders (including Martin Luther King, Jr.) and anti-war anti-war activists.  It was also at WHO that he interviewed Jimmy Hoffa, the powerful union leader who mysteriously disappeared in 1975.

In 1967, Phil began what was to become Donahue on WLWD in Dayton.  In 1974, Donahue relocated his show to Chicago.  Phil and Margie divorced in 1975.  The couple had five children: Michael, Kevin, Daniel, Mary Rose and James Patrick "Jim."  In August of 2014, Jim Donahue, a lawyer who lived and worked in Honolulu, Hawaii, died suddenly of an aortic aneurysm.  He was 51 years of age at the time of his passing.

On May 21, 1980, Phil married actress Marlo Thomas, the star of That Girl and daughter of legendary comedian Danny Thomas. They wed at Marlo's parents' home in Beverly Hills, California. Their romance began in 1977 when Marlo appeared on Donahue's show.  At the time, Marlo was 39 and single, while Phil was 41 and divorced.  As Marlo put it in a 2014 article in the Huffington Post, she was a poster girl for the single state until "I went on this talk show, and some chemical thing happened.  That's the only way I can explain it."

As the show drew to a close, Marlo clasped Donahue's hand and told him, "You are loving and generous and you like women.  And it's a pleasure.  And whoever is the woman in your life is very lucky."  Phil blushed boyishly and later asked her out.  The two are ardent feminists and strong supporters of the National Organization for Women (NOW). 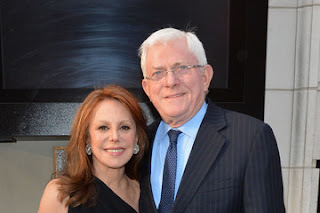 After a decade in Chicago, Phil decided to move his talk show to New York City.  On January 7, 1985, Donahue was broadcast from the Big Apple for the first time.  Here's how John Corry described the event in The New York Times.

Mr. Donahue's celebrated 9 A.M. interview-and-audience-participation program, Donahue, began promisingly enough. Mr. Donahue stood above the ice-skating rink in Rockefeller Plaza, said he was happy to be in New York, and pointed to the RCA Building across the street. ''NBC lives here,' he said, and then shook hands with the uniformed doorman. Mr. Donahue was downright beguiling.

Phil Donahue has been quite outspoken and forthright about his political leanings.  In 2002, while being interviewed by Katie Couric on Today, he stated, "Don't be afraid of liberals.  Some of them are my best friends.  You can call us names, you can picket us, but you cannot take our flag.  We are as proud of America as anyone else."

On his show, Phil never shied away from discussing controversial subjects or highlighting controversial guests. He first experimented with audience participation in Dayton, Ohio on November 6, 1967.  It happened quite by accident.  A studio audience had arrived to watch a variety show, which, unknown to them, had been cancelled.  Donahue suggested allowing them to watch his interview instead.  Phil's guest that day was American atheist Madalyn Murray O'Hair, then causing quite a stir due to her anti-religious views.  Phil soon permitted the audience to question O'Hair

Phil's show seems fairly tame in this age of reality TV,   His program often focused on wedge issues that divide liberals and conservatives.  It dealt with  matters such as abortion, consumer protection, civil rights and anti-war protests.  Donahue also had some controversial and unpopular guests over the years, including White Supremacist David Duke

*  Phil Donahue's 1980 autobiography is entitled Donahue: My Own Story. 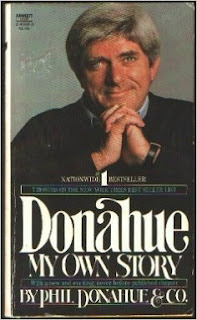 *  Consumer advocate Ralph Nadar was a frequent guest on Donahue's show.  In 2000, Phil supported Nader's campaign for the presidency of the United States.

*  In 1992, Phil Donahue was inducted into the 9th Academy of Television Arts & Sciences Hall of Fame.  This honour is given to individuals who have made outstanding contributions to television. *  From 2002 until 2003, Phil Donahue hosted a prime time talk show on MSNBC, a liberal cable station run by the NBC network.  Phil's show was cancelled on February 25, 2003, the reason cited being low ratings.  However, Donahue believes his firing was due to his anti-war stance with regard to the then-impending U.S. invasion of Iraq (it began on March 20, 2003.  In 2013, Phil spoke to Democracy Now!, a non-profit news organization, about his dismissal from MSNBC.  He made the following statement: "Well, I think what happened to me, the biggest lesson, I think, is the - how corporate media shapes our opinions and our coverage.  This was a decision - my decision - the decision to release me came from far above.  This was not an assistant program director who decided to separate me from MSNBC.  They were terrified of the anti-war voice. And that is not an overstatement. Antiwar voices were not popular. And if you’re General Electric, you certainly don’t want an anti-war voice on a cable channel that you own; Donald Rumsfeld is your biggest customer."

* Phil co-directed a documentary, Body of War, which chronicles the story of Tomas Young, an Iraq War veteran, who was paralyzed in combat.

*  In his 2001 interview for the Archive of American Television, Phil Donahue explained why he decided to end his talk show in 1996.  Here is what he said:

I felt that 29 years . . . I'm 60 years old.  We aren't doing the numbers we used to.  It's getting tougher and tougher.  They don't want to see politicians.  They want to see naked ladies.  You're being challenged on every front in terms of the visual, the fighting, the (Jerry) Springers, the guards

The audiences are being prepared on these other shows.  We never told an audience when or what to say.  I mean there are people being told to cry, being told when to cry, when to scream.  I mean it's all manufactured.  We were very proud of the fact that we got a few people from out of the audience - what do you know, maybe someone will say something interesting.