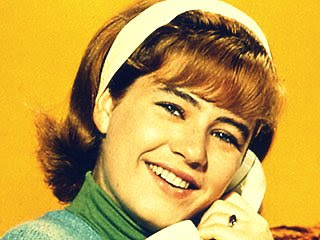 Sadly, Patty Duke passed away on March 29, 2016 at the age of 69.  She was an accomplished actress who received an Academy Award for her portrayal of Helen Keller in the 1962 movie The Miracle Worker.  A true thespian in every sense of the word.  Patty performed in films, theatre and on television.  She won Emmy Awards for her work in the television movie My Sweet Charlie (1970), the TV min- series Captain and the Kings (1976) and the television version of The Miracle Worker (1979) in which she played Helen Keller's teacher, Annie Sullivan, rather than Helen.  However, I will always remember her in the role of identical cousins Patty and Cathy Lane on The Patty Duke Show., the popular sitcom that ran on the ABC network from 1963 until 1966.

Patty died peacefully, surrounded by the friends and relatives who had travelled to her hospital bedside in Coeur D'Alene, Idaho.  Her representative made the following statement regarding the cause of her death:

Her cause of death was sepsis from a ruptured intestine. She was a wife, a mother, a grandmother, a friend, a mental health advocate and a cultural icon. She will be greatly missed.

Patty displayed remarkable courage in her struggle with bipolar disorder and she was truly a mental health pioneer.  Her eldest son, 45 year-old actor Sean Astin, described his mother as "a warrior." "You watch this 4-foot-10, tiny imp of a lady who's more powerful than the greatest military leaders in history," said Sean.  After being diagnosed with bipolar disorder in 1982, Patty became a passionate advocate for mental health awareness.  Sean stated that the diagnosis was a "watershed" in his mother's life  and that it gave her "a whole new sense of purpose, and that was to share what she had gone through with other people."

I recall The Patty Duke Show with great fondness.  I watched it regularly as a child and enjoyed Patty's zany antics. The teenage Patty Lane had a penchant for using silly slang expressions.  Her hair was styled in a 1960s flip and she frequently wore hairbands.  I was too young to understand that Patty Lane and her more conservative, European-educated cousin, Cathy, were both played by Patty Duke. After all, the two girls appeared in the same scenes together.

I was really surprised and a bit disappointed when it was explained to me that it was done through the use of a split screen effect.  Here's how it worked..  A young woman named Rita McLaughlin served at Patty /Cathy's double and she was seen from the back as one of the girls.  Meanwhile, Patty Duke faced the camera as the other.

The Patty Duke Show was set in Brooklyn Heights, New York.  Patty Lane was an all-American teenager, while her look-alike cousin, Cathy Lane, was much more refined and she spoke with a Scottish accent.  The girls sometimes switched identities, causing confusion and hilarity.


THE CAST OF THE PATTY DUKE SHOW

Patty Duke was born Anna Marie Duke on December 1946 in Elmhurst, Queens,New York.  She was the youngest of the three children of Frances and John Brock Duke.  John Duke worked as a handyman and a taxi driver.  Patty and her siblings, a brother named Raymond and a sister, Carol, had a difficult childhood. Their father was an alcoholic and their mother suffered from depression.  When Patty was eight years old, she was placed under the care of her brother Ray's talent managers, John and Ethel Ross.  The Rosses took control of the youngster's acting career.  They also abused and exploited her.

Patty began her acting career in the late 1950s.  One of her earliest roles was as Ellen Williams Dennis on the soap opera The Brighter Day.  In 1959, at 12 years old, she was a contestant on the quiz show The $64,000 Question. She also appeared in  television commercials.  In October of that year, Patty began her first major starring role as Helen Keller in a Broadway production of The Miracle Worker.

At the age of 16, Patty Duke won an Oscar for Best Supporting Actress for her performance in the film adaptation of The Miracle Worker alongside Anne Bancroft,who played Annie Sullivan.  Following Patty's success in The Miracle Worker, writer and producer Sidney Sheldon created a comedy series, The Patty Duke Show, just for her.

Bill has made appearances in numerous television series from Family Theatre in 1951 to Desperate Housewives in 2009.  He played Max Devore in the 2011 TV miniseries Bag of Bones and he had an uncredited cameo role as an elevator operator on 2 Broke Girls.


Jean Byron, who played Patty's mother, Natalie Lane, passed away on February 3, 2006 at the age of 80.  She died of complications after undergoing hip replacement surgery.

Born Imogene Buckhart on December 10, 1925 in Paducah, Kentucky, Jean was a film, television and stage actress.  In the 1950s, she had roles in such B-movies as Serpent of the Nile.  In 1959, she was cast in the recurring role of Dr. Imogene Buckhart (her real name) on The Many Lives of Dobie Gillis.

Jean was married to Syrian-born American actor Michael Ansara. The couple divorced in 1956. They had no children and Jean never remarried.  In 1958, Ansara wed actress Barbara Eden of I Dream of Jeannie fame.  That marriage ended in divorce in 1974.

Paul O'Keefe, who played Patty's younger brother, Ross Lane, is now 64 years old.  He was born in Everett, Massachusetts on April 27, 1951.  At seven years of age, Paul portrayed Winthrop in the 1959 Broadway production of the musical The Music Man.  By the time he won the role of Ross in 1963, he was staring on Broadway in the title role of Oliver.

Prior to The Patty Duke Show, Paul appeared in minor roles in Car 54,Where are You? and Naked City.  He also had part in the daytime soap opera As The World Turns as Danny Stewart (aka Jimmy Lowell).  After The Patty Duke Show, he made a guest appearance in a 1967 episode of My Three Sons.  He never really had an acting career as an adult, though.

After the Patty Duke Show ended, Eddie appeared in 1968 episode of The Carol Channing Show, a 1968 episode of  the adventure series Daltari and a two-part 1970 episode of Gunsmoke.  During the 1970 to 1971 television season, Eddie had a role as reporter on the short-lived series Nancy, starring Renne Jarrett as Nancy Smith, the daughter of the President of the United States.   After his television career waned, he became more involved with painting, a hobby he took up to relax himself.

In 2009, Applegate revived his acting career with movie role as Henry in the indie thriller Rain From Stars (The film was not released in the United States until 2013).  Eddie and his wife, Betty Jenkins, currently reside in Chatsworth, California.

* Do you remember The Patty Duke Show's theme song  It was a very catchy tune and so were, shall we say, unforgettable.

Meet Cathy, who's lived most everywhere,
From Zanzibar to Berkeley Square.
But Patty's only seen the sight.
A girl can see from Brooklyn Heights --
What a crazy pair!

But they're cousins,
Identical cousins all the way.
One pair of matching bookends,
Different as night and day.

Where Cathy adores a minuet,
The Ballet Russes, and Crêpe Suzette,
Our Patty loves to rock and roll,
A hot dog makes her lose control --
What a wild duet!

Still, they're cousins,
Identical cousins and you'll find,
They laugh alike, they walk alike,
At times they even talk alike --

You can lose your mind,
When cousins are two of a kind.

The song was written by Sid Ramin and Bob Wells (lyrics).  Hey, how can you forget a line like "A hot dog makes her lose control?"

* There was a 1999 Patty Duke Show reunion TV movie.  It was called The Patty Duke Show: Still Rockin' in Brooklyn Heights.  Patty Duke and all of the original cast members reprised their roles, with the exception of Kitty Sullivan who played Patty Lane's nemesis Sue Ellen.

* After The Patty Duke Show ended its run in 1966, Patty was seen in the role of Neely O'Hara in the 1967 film Valley of the Dolls.  It was her first real adult role.

* Patty was the author of two books, a 1987 autobiography entitled Call Me Anna and a 1992 book entitled Brilliant Madness: Living with Manic Depressive Illness.

* It was John and Ethel Ross who changed Anna Marie Duke's first name to Patty, after Patty McCormack, a successful child star of the 1950s.

* Sean Astin has invited the public to contribute to a mental health foundation that he has established in his mothers memory - the Patty Duke Mental Health Initiative.  I strongly encourage you to do so. For information, just click on the following link: