Whatever happened to Mr. T? 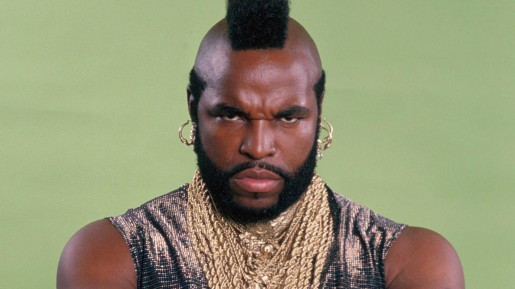 Mr. T is an imposing figure.  He'll always be known for his distinctive hairstyle, his mounds of gold jewellery and his tough guy image.  He is an actor, bodyguard, television personality and retired professional wrestler.  Mr. T has engaged in many pursuits and he has lived a very colourful life.

Mr. T was born Lauremce Tureaud in Chicago, Illinois on May 21, 1952, the youngest son of 12 children.  His father, Nathaniel Tureaud, was a minister.  Laurence was child of the ghetto.  He grew up in the housing projects, the now-demolished Robert Taylor Homes, on Chicago's South Side.  His father left when he was five and his mother raised the family on welfare.  Young Laurence attended Dunbar Vocational Career Academy, where he took part in football, wrestling and martial arts.  He won a football scholarship to Prairie View A&M University in Prairie View Texas, but was expelled after his first.year.

After his expulsion from university, Mr. T enlisted in the United States Army and served in the Military Police Corps..  After his his discharge from military service, T tried out for Green Bay Packers of the National Football League but failed to make the team as a result of a knee injury.  He next worked as a bouncer and then as a bodyguard.

In 1980, actor Sylvester Stallone noticed Mr. T as he participated in NBC's "America's Toughest Bouncer" competition, a segment of NBC's Games People Play.  Stallone wanted to use T in his next Rocky sequel, Rocky III.  Although T's Rocky III role was originally intended to consist of just a few lines,, he was eventually cast as Rocky Balboa's primary boxing rival, Clubber Lang.  Mr. T. rose to fame with his performance in the 1982 film.

In a 2016 interview for USA Today with Charlotte Wilder, T declared that Clubber Lang was his favourite role.  "Clubber Lang was it," he proclaimed.  "It was inspiring, because Clubber Lang is basically my entire life story.  He wanted a shot, and people said he wouldn't make it.  I was in awe when they asked me to be in Rocky III, because a couple of years before I had watched Rocky I and II.  So to hear they want me in Rocky III?  Wow.  It was mind boggling."

As Clubber Lang, T had well known catch phrase - "Pity the fool."  On Conan O'Brien's talk show, Mr T explained what he meant by the phrase: "When you pity someone, you're showing them mercy.  I didn't start this pity stuff.  You'll find pity so many times in the Bible and fool so many times, so I put 'em together."

After Rocky III, Mr. T began to make TV appearances.  He played himself in a 1982 episode of Silver Spoons, starring Ricky Schroder. The episode is entitled "Me and Mr. T" (Season 1, Episode 4, Air Date: October 16, 1982).  In the episode, Schroder's character, Ricky Stratton, is bullied at school and his father hires Mr. T to be his bodyguard.

Then Mr. T became a bona fide television star.  From 1983 to 1987, he starred as B.A. (Bad Attitued) Baracus in the NBC action-adventure series, The A-Team.   T's Baracus character was one of four protagonists on the show, a group of men who were wrongly convicted of a crime during the Vietnam War.  They escaped from the Military Police and became soldiers of fortune in Los Angeles, where they used their military training to combat injustice and oppression.

Below is the original A-Team cast photo: From Left to Right: Dirk Benedict, Mr. T (Top row) and George Peppard 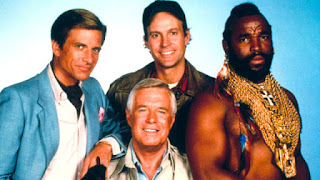 Mr. T also appeared in a 1983 episode of Diff'rent Strokes entitled "Mr. T and mr. t" (Season 6, Episode 1, Air Date: October 1, 1983), in which he again portrayed himself.  In the episode, a scene from The A-Team is being shot at the Drummond apartment.  Arnold (Gary Coleman) tries to impress a girl by dressing and acting like Mr. T.

In 1985, Mr. T became a professional wrestler. He was Hulk Hogan's tag-team partner in the the main event in theWorld Wrestling Federation's first WrestleMania on March 31, 1985 at Madison Square Garden in New York City.  Muhammad Ali was the referee.


In 1995, Mr. T had a cancer scare when was diagnosed with T-cell lymphoma.  He exclaimed to Coping with Cancer magazine, "Can you imagine that?  Cancer with my name on it.  Personalized cancer."  He fought it aggressively and wrote about his experience in a book with author Joyse Brooks, entitled Cancer Saved My Life. Cancer Ain't For No Wimps.  In his book, he stated: "If you don't remind me I have cancer then I won't remember either, "Ibecause I am too busy living.  Mr. T. ain't dyin' and pity the fool who says it."  As of 2017, the book hadn't been published.


You may wonder why Laurence Tureaud decided to give himself the moniker "Mr. T."  Well, at the age of 18, Laurence change his name to Mr. T primarily to gain respect.  Here's how he explained it a 2015 interview for Huffington Post with Bill Bradley: "I changed my name because as a black man growing up in a white society, I watched my father being called 'boy," and he was a preacher.  I watched my brothers coming back from the Marines and Vietnam and being called 'boy.'  I watched enough black men in my family being called 'boy,' so I point to the fact: What does a black man have to do to get his respect as a man?  So, when I became 18, I legally changed my name to Mr. T."

You may also wonder about Mr. T's distinctive mohawk hairstyle.  It's actually the hairdo of African Mandinka warriors and T.also told Bill Bradley that he is not going to change his look anytime soon.  He plans on wearing his mohawk until his hair starts falling out.  "I got a couple more years.  And then when it falls out, I go back to being baldheaded."

Mr. T has three children, two daughters, Lesa and Erica, and a son, T Jr., with ex-wife Phyllis Clark, whom he married circa 1971. One of his daughters, Erica Clark, is a a regular on Chicago's stand-up comedy circuit.  In 2015, Erica told NBC News that  she doesn't really speak to her father more than once or twice a year.  "We're not super close since I moved out," Clark said.  "He wants me to be a nice teacher and get married and have kids.  (My dad) doesn't want me to do entertainment at all so he hasn't come to any of my shows before but he's aware that I do it."

A man named Alexander Taylor claims to be Mr. T's son.  In 2013, Taylor filed a 5.4 million lawsuit against T in alleging that he was abandoned by his father and ended up joining a gang and living a life of crime.  According to the lawsuit, Taylor was born to Vanessa Taylor (mother) and Mr. T (father) on May 25, 1988.  Mr. T was accused of  neglecting to provide his alleged son with the necessities of life.  The lawsuit was dropped in 2014 because Alexander failed to pay the $400 for filings and administrative fees to continue the legal action.

* Mr. T was a bodyguard for several stars in the late 1970s to 1980, including boxing greats
Muhammad Ali, Joe Frazier and Leon Spinks, actor Steve McQreen and singers Michael Jackson and Diana Ross.

* Mr. T no longer wears his heavy gold chains.  He stopped wearing them in 2005 after having seen the suffering and losses caused by Hurricane Katrina.  He became a born again Christian and helped in the efforts to clean up after the devastating hurricane.  In his 2016 interview with USA Today, he said he vowed never to wear a chain he owned again because "I felt in would be a sin against God to wear my gold when the people lost everything."  "I remember the bodies floating in the water, and I felt it would be disrespectful and insensitive to people who died, so I said I'd never wear my gold again.  Only gold I have is the gold in my heart," he stated.

* In 2015, Mr. T became "Mr. Guaran-T for Fairfield Inn and Suites.  He travelled around the United States, randomly surprising unsuspecting hotel guests and making sure everything was running smoothly.

* In 2017, Mr. T was a contestant on Season 24 of Dancing With the Stars. He told the Chicago Tribune that he had entered the competition to help children with cancer.  He vowed to shave off his trademark mohawk if he won the contest.  T danced alongside Kym Herjavec, an Australian professional ballroom dancer.  They waltzed to "Amazing Grace."  They also danced the Cha Cha to "Theme from the A-Team" and the Paso to "Eye of the Tiger," the theme song from Rocky III.  They were the third couple eliminated from the competition and finished in 10th place.

Mr. T took issue with ABC's Good Morning America for saying he "got booted from Dancing With the Stars. He told GMA co-anchor Michael Strahan, "We didn't get booted off, we gradually eased off.   Nobody going to boot Mr. T off.  As a competitor, we left it on the dance floor, like you're supposed to.  We walked off with grace and style."  When Strahan offered Mr. T a razor, T replied, "But I ddn't win.  If you let me get to that guy who put 'booted' up there on the screen, I'll cut my hair off."

SOURCES:  Huffington Post, "You'll Pity The Fools Who Don't Know These 5 Things about Mr. T," by Bill Bradley, November 13, 2015; USA Today, "Mr. T talks about fighting cancer, playing Clubber Lang, and why he no longer wears his gold chains," by Charlotte Wilder, May 18, 2016; Superfan TV, "The Surprising Inspriration Behind Mr. T's 'I Pity the Fool Catch Phrase," by Stephen Proctor, April 5, 2017; Chicago Tribune, "South Side Native Mr. T insists he wasn't booted off 'Dancing with the Stars,'" by Tracey Swartz, April 11, 2017; NBC News.com, "Mr. T's Daughter Erica Clark Stands Out by Standing Up,," by Scout MacEachron, June 2, 2015; Radio Online, "I Pity The Fool!  Mr T Sued By Alleged Secret Son: You Abandoned Me & I Was Forced To Join A Gang," March 11, 2014; Wikipedia; IMDb