You wanted to know . . .What happened to the actors who played Mary Ellen, Julie and Penny on Leave it to Beaver

Peter P., a devoted Leave it to Beaver fan, wanted to know what happened to some secondary characters on the show, namely Pamela Barird, who played  Mary Ellen Rogers, Cheryl Holdridge, who played Julie Foster, and Karen Sue Trent, who played Penny Woods.

Pamela then portrayed Mary Ellen Rogers on Leave it to Beaver from 1958 until 1961.  She first appeared on the show in an episode entitled "My Brother's Girl" (Season 1, Episode 27, Air Date (April 16, 1958).  In the episode, a scheming Mary Ellen tries to get Wally to ask her to the school dance by becoming friendly with Beaver (She allows him to use her father's electric train set).

Pamela only appeared in six episodes of Leave it to Beaver.  It's interesting to note that she played Mary Ellen in five of the six episodes.  In her third appearance on the show, in an episode entitled "Wally's Orchid" (Season 3, Episode 27, Air Date: April 2, 1960), she portrayed Myra Barker, a popular girl whom Wally wants to take to his high school dance.  He worries that she will turn him down if he can not afford to buy an expensive orchid for her.  In Pamela's fourth appearance on the show, she played Mary Ellen again.

In 1973, Pamela married recording artist Bob Henry (real name Robert H. Hensley). Bob made records from 1957 until 1970, when he entered the ministry and started a half-way house for troubled youth.  Bob and Pamela had five children and remained together until Bob's death on May 22, 2016.

Note: On July 25, 2011, Pamela contacted the website inthebeginning.com.  She stated that she had just completed her Masters in Education. As of 2013, she was working on her doctorate.  Click on the link below for more information and photos of Pamela.

Pamela, if you have read this posting, I have a request if you are willing and able.  I would be honoured and please if you sent me and my readers an update on your life. 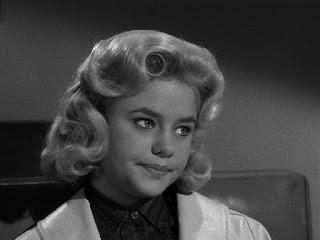 Cheryl Holdridge played Julie Foster, another of Wally Cleaver's girlfriends.  She was born Cheryl Lynn Phelps on June 20, 1944 in New Orleans, Louisiana.  Her mother, Julie A. Phelps (1908-2003), was a Broadway dancer with her partner, Dick Mason.  Soon after Cheryl's birth, she and her mother moved to Burbank, California and Julie married Brigadier General Herbert Charles Holdridge, a retired American military officer, in 1950.  Holdridge adopted Cheryl in 1953 and she took his surname.

At an early age, Cheryl was trained in ballet and tap with Joyce Cole in North Hollywood.  In the spring if 1956, she became a cast member of the Mickey Mouse Club in the show's second season.  She joined the core group of Mouseketeers. along with Annette Funicello, Doreen Tracey, Cubby O'Brien, Tommy Cole, Bobby Burgess, Lonnie Burr, Karen Pendleton, Sharon Baird and Darlene Gillespie.  The show ended its run in 1959 and Cheryl graduated from Ulysses S. Grant High School in 1961.

Below is a publicity photo of 11-year-old Cheryl as a Mouseketeer in April of 1956.

In  May of 1960, Cheryl embarked on a tour of Australia with other former Mouseketeers.  She became involved in a romance with Australian singer Leslie William Morrison, known professionally as Lucky Starr.  Eyebrows were raised because Cheryl was under 16 at the time and Morrison was 19.  Fan magazines and gossip writers later linked her with other celebrities such as Elvis Presley.


From 1959 to 1963, Cheryl appeared in eight episodes of Leave it to Beaver. In the first two episodes, "Wally's Pug Nose" (Season 2, Episode 19, Air Date: February 5, 1959), and "Wally, the Businessman (Season 3, Episode 35, Air Date: May 28, 1960), she portrayed Gloria Cusick.  It wasn't until her third appearance on the show, in an episode entitled "Teacher's Daughter" (Season 4, Episode 15, Air Date: January 7, 1961) that she played Julie Foster.  In that episode, Wally begins to date Julie, but complications arise when he is transferred to Julie's father's English class.  Cheryl's final appearance on Leave it to Beaver was in an episode called "Eddie's Sweater" (Season 6, Episode 29, Air Date: April 11, 1963).

Cheryl Holdridge reprised her role as Julie Foster in two episodes of The New Leave it to Beaver: "While the Beav's Away" (1985) "Yesterday's Gone" (1987).

Cheryl was married three times.  On November 7, 1964, she married Lance Reventlow, a British-born racing car driver and the only child of Woolworth heiress Barbara Hutton. The couple were married at Westwood Community Methodist Church in Los Angeles in a lavish ceremony before 600 invited guests.  They honeymooned in Hawaii.  Below is their wedding photo.


After her marriage, Cheryl gave up her acting career and assumed the title of Countess, since her father-in-law was Danish nobleman,Count Kurt Haugwitz-Hardenberg- Reventlow, second husband of American socialite Hutton.  Lance perished in a plane crash near Aspen, Colorado on July 24, 1972.  He was 36 years old at the time of his death.  Although an experienced pilot, he was a passenger aboard a small plane on the day of the crash, scouting locations for real estate as part of a plan to build a ski resort in Aspen.

On October 12, 1974, Cheryl wed Albert James "Jim" Skarda, who ran a car rental service in Aspen, Colorado.  They married in a civil ceremony in Las Vegas, Nevada and their marriage ended in divorce in 1988.

In 1994, Cheryl wed for a third time, to Manning J. Post, a one-time film producer for Republic Pictures and a longtime North Hollywood Volkswagen dealership tycoon.  The couple  shared an interest in liberal causes and state Democratic Party politics.  Manning J. Post died on March 13, 2000 in Santa Monica, California at the age of 82.  After Post's death, Cheryl made a cameo appearance in the 2000 feature film, The Flintstones in Viva Rock Vegas.


Cheryl Holdridge passed away on January 6, 2009 from lung cancer at her home in Santa Monica.  She was 64 years old at the time of her death.  Cheryl Holdridge did not have any biological children.

From 1960 until 1962, Karen Sue Trent played the role of Penny Woods, Beaver's nemesis, in 14 episodes of Leave it to Beaver.  Karen Sue replaced Jeri Weil, who played Beaver's original nemesis, his bratty tattletale classmate Judy Hensler.  Jeri appeared in 31 episodes between 1957 and 1960.  Beaver seemed to get along better with Penny, however, then he did with Judy.  He and Penny had a sort of love-hate relationship.


Karen Sue Trent was born on March 14, 1948 in the United States (exact location is not listed online).  Karen Sue first played Penny Woods in an episode called "Ivanhoe." (Season 3, Episode 36, Air date: June 4, 1960).  Her final appearance on Leave it to Beaver was in an episode entitled "Beaver, the Bunny" (Season 5, Episode 16, Air Date: January 20, 1962), in which Beaver has to play the part of a cute bunny rabbit in a school pageant.  The show remained on the air until 1963, without Karen Sue.

After Leave it Beaver, Karen Sue Trent has just one more acting credit to her name.  She portrayed Lorrie in a 1963 episode of  yet another TV Western, The Rifleman, entitled "Old Tony" (Season 5, Episode 26, Air Date: April 8, 1963).  Karen seems to have ended her acting career at the age of 15.  There is one clue as to why Karen left the business.  According to IMDb, she sustained injuries in her very last role on The Rifleman, when her Lorrie character sinks in quicksand. IMDb speculates that the experience "ultimately soured her desire to keep performing."

Karen Sue, if you have read this posting, I have a request if you are willing and able.  I would be honoured and please if you sent me and my readers an update on your life.

* Wally Cleaver eventually married Mary Ellen Rogers, as they were depicted as a married couple in Still the Beaver, a 1983 television reunion movie.  Pamela Baird, however, did not portray Mary Ellen in the TV movie or the subsequent The New Leave it to Beaver series (1983-1989).  She was succeeded in the role by Janice Kent.  Pamela did have a cameo role on The New Leave it to Beaver in a 1987 episode entitled "Yesterday's Gone" (Season 2, Episode 27).

* According to IMDb, Pamela was a member of a late 1950s, early 1960s close-harmony singing group called The Holly-Tones, along with her cousins, Deanna Beaird and Joyce Beard.