Rich Little: Then and Now 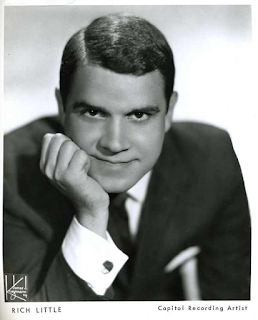 "If you can make somebody laugh for an hour, that's good.  And it's good for your health!"

Richard Cruthers Little was born in Ottawa, Ontario, Canada on November 26, 1938, the second of the three sons of Lawrence Peniston Little, a doctor, and  his wife, Elizabeth Maud ((née Wilson), a homemaker.  No one in his family had ever been in show business.  Rich was a big movie fan, however, and he was an usher at the Elgin movie theatre in Ottawa.  The first film star he impersonated was Jimmy Stewart, after taping Stewart's 1954 film, The Far Country, under the screen with a tape recorder.

Rich Little has been nicknamed "The Man of a Thousand Voices" and his official website describes him as "a master mimic of more than 200 voices."  Rich began by mimicking his teachers at school.  "They could never figure out why saying 'good morning' was so funny," he told Closer Weekly in 2016.  Finally they stopped asking me questions, because they didn't want to hear wrong answers in their own voices."

Rich was eventually paid for his impersonations.  He began performing at Shriners conventions, imitating local politicians and movie stars.  He and singer Paul Anka, a fellow Ottawa native, did many shows in the Ottawa area for $10 or $20.  Rich and another impressionist, Geoff Scott, performed in night clubs, imitating the voices of Canadian politicians such as Prime Minister John Diefenbaker and Ottawa mayor Charlotte Whitton.

Rich went on to become a disc jockey, often incorporating his impressions into his show.  In the early 1960s, he was the host of a radio talk show on CJET in Smith Falls Ontario.  In 1963, he issued two recordings in Canada.  The first, entitled My Fellow Canadians, featured Rich and others impersonating figures who were well known in Canada   The second album, entitled Scrooge and the Stars, featured Rich acting out Charles Dickens' A Christmas Carol  on his own, playing the roles of 22 characters in the voices of Hollywood stars.

On the basis of his club work and his recordings, Rich was given an audition with singer Mel Tormé, who was then busy helping to launch a new television variety show starring Judy Garland.  Mel, who was performing in a show with Rich in Toronto, made a tape and played it for Judy.  According to Rich, Judy "didn't like impersonators."  However, when she heard heard him imitate her A Star Is Born co-star, James Mason, she said. "Come on!"

The Garland episode was aired on January 26, 1964.  The main guests were comedian Martha Raye and Peter Lawford, her co-star from Easter Parade (1948).  Rich performed his impressions of Hollywood stars with Judy seated beside him, laughing.hysterically.  He did a rendition of Judy's song, "The Man that Got Away" from 1954's A Star Is Born, with the voices of Jack Benny, George Burns, Fred MacMurray, Jack Hawkins, John Wayne, Alfred Hitchcock, Walter Brennan and James Mason. 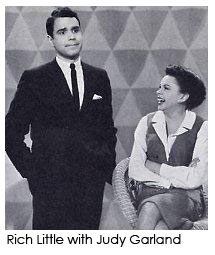 From 1966 to 1967, Rich  had a regular TV role as an eccentric neighbour on the ABC sitcom Love on a Rooftop.  The series starred Judy Carne and Peter Deuel (later known as Pete Duel), as a newlywed couple who live in a rooftop apartment in San Francisco.  Rich's character, Stan, never held a steady job and spent his days working on his inventions and dreaming up moneymaking schemes. 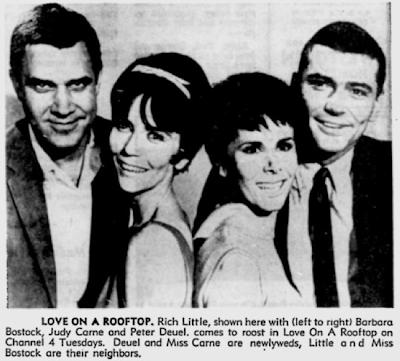 After Love on a Rooftop, Rich made guest appearances in episodes of such sitcoms such as That Girl (1967), The Flying Nun (1968) and Petticoat Junction (1969).  In an episode of That Girl entitled "To Each Her Own," he portrayed Andrew Marshall, a writer who amuses Marlo Thomas' character, Ann Marie, with his impersonations.  In two episodes of The Flying Nun, he appeared as the injury-prone Brother Paul Leonardi, and in the Petticoat Junction episode, "Billie Jo and the Big Big Star," he played comedian Rick Wayne, Billie Jo Bradley'new boyfriend.

Below is a photo of Rich in a scene from Petticoat Junction with Meredith MacRae, who played Bille Jo Bradley. 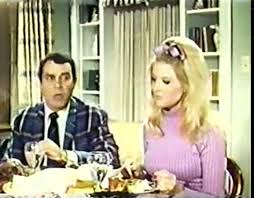 In the early 1970s, Rich became associated with Dean Martin.  He appeared on 24 of the 54 "Dean Martin Celebrity Roasts," a series of television specials held regularly by Martin from 1974 to 1984.  Martin and his friends would "roast" a celebrity, meaning the guest of honour would be subjected to jokes at their expense.  In addition to insult comedy, the roasts would involve some genuine praise and tributes.  The "roastee" would take the jokes in good humour, as they were not intended to be serious criticism or insult.

Rich appeared on numerous television variety shows, including those of Ed Sullivan, Jackie Gleason and Glen Campbell, as well as on Rowan and Martin's Laugh-In and The John Davidson Summer Show.  From 1973 to 1973, he was a semi-regular on Emmy-winning The Julie Andrews Show from and he had his own variety show on NBC, The Rich Little Show, from 1975 to 1976.  He also starred  in KopyKats, hour-long segments of The ABC Comedy Hour.  KopyKats, originally broadcast in 1972, was filmed in England.  Ir consisted of celebrity impersonations, with the actors dressed in full costumes and makeup for all the sketches.

Rich has been a frequent guest on talk shows and is known for his appearances with Johnny Carson on The Tonight Show and his impressions of Carson's voice and mannerisms were so spot-on that, according to Rich's autobiography, Johnny banned him without  reason or notice from appearing on The Tonight Show after his August 1982 appearance.

In 1978, Rich starred in the HBO special, Rich Little's Christmas Carol, a one-man show, in which he played all the roles as various comedians, such as W.C. Fields as Ebenezer Scrooge..  In 1987, he appeared in We the People 200, The Constitutional Gala, in which he used his impressions to portray historical figures.  For example, he impersonated Henry Fonda as Abraham Lincoln and he delivered a spirited speech as Winston Churchill.

After the 1980s, Rich moved away from the spotlight, but he still remained active.  He guesst-starred in a 1996 episode of The Nanny as an IRS Appeals Officer in an episode entitled "The Taxman Cometh."  He portrayed Johnny Carson in The Late Shift, a 1996 HBO TV movie about the power struggle that occurred when Johnny Carson retired and both David Letterman and Jay Leno wanted to replace him as host of The Tonight Show.  As of February 2018, Rich is a regular performer at the Laugh Factory in the Tropicana Hotel in Las Vegas.


On his official website, Rich Little is quoted as saying, "An impression is what you think a person sounds like.  It could be an exaggeration or a cartoon.  It's your impression.  I think of an impersonation as more of an exact copy.  Knowing the person personally is not important; it's knowing the speech patterns and mannerisms  (in order) to imitate the person the way the public seems him."  It took Rich seven years to perfect his impression of Frank Sinatra, but only several minutes to create one for Dr. Phil.

Rich Little has been married four times.  He married his first wife, Jeanne Worden, in 1971.  Jeanne was Joey Bishop's secretary.  The couple had a daughter, Bria, but divorced in 1989.  In February of 2005, Rich and daughter Bria attended the "Night of 100 Stars" Oscar party at the Beverly Hilton Hotel.

On October 29, 1994, Rich, 55, wed for the second time, to comedian Jeannette Markey, 28.  The marriage took place in a penthouse suite at the MGM Grand Hotel in Las Vegas.  There were 97 guests and Rich said his vows as Cary Grant.  The couple met in March of 1993 when they were both performing at the Riviera Hotel on the Las Vegas strip.  Their marriage ended in divorce in 1997.

In 2003, Rich married Marie Marotta in Hawaii.  However, Marie's life ended tragically.  On July 15, 2010, Rich found her body and a suicide note in the bedroom of the couple's home in the Lake Sahara district of Las Vegas.  She died of a deliberate overdose of sleeping pills.  Rich's longtime friend, retired Canadian radio broadcaster Gord Atkinson, said that Marie suffered from severe migraine headaches that "sometimes knocked her out for days."  According to Atkinson, she left Rich "a loving note and said that she couldn't go on."  Marie Marotta was 45 years old at the time of her passing."

In 2012, Rich wed Catherine Brown.  In 2016, after recently splitting with Catherine, Rich said, "I've been married too many times.  He also called Marie Marotta "the big love of my life."

* Rich Little has a second daughter, Lindsay (born in 1988), whose mother is Lalette Cottrell.  In 1990, Rich sought custody of one-year-old Lindsay.  At the time, the child's mother lived in Delaware, while Rich lived in California  Lalette fought Rich on the issue of child support.  Rich's lawyer, Gerald Z.  Berkowitz, stated that the impressionist had succeeded in having the case heard in Delaware
and that his client was willing to pay support in an amount "consistent with the needs of the child."
* Rich is an alumnus of Ottawa's Lisgar Collegiate.  In 2018, he helped launch the high school's 175th anniversary reunion.

* Rich has written a memoir titled Little By Little: People I've Known and Been. 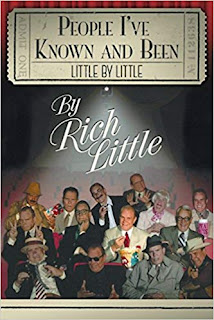 * Rich's talent for impersonations has come in handy in movies when an actor's speech has been affected by poor health.  For example, when David Niven was extremely ill, Rich stepped in and dubbed his voice in Trail of the Pink Panther (1983) and Curse of the Pink Panther (1983).  He did the same for James Cagney in the 1984 TV movie, Terrible Joe Moran, after Cagney's voice was impaired by a stroke.  In the 1991 TV special, Christmas at the Movies, Rich provided an uncredited dub for actor/singer Gene Kelly, who was ailing.

* In 2010, Rich became a naturalized American citizen.  At the suggestion of the judge, he was sworn in using the voice of John Wayne.


* Rich has a granddaughter named Alaina and a grandson named Lincoln.

* Rich entertained at both of Ronald Reagan's presidential inaugurations and has impersonated every American president from John F. Kennedy to Donald Trump.

* Rich is supportive of charities such as Wounded Warriors and the Gay Sinise Foundation.  After his wife Marie died, he created The Marie and Rich Little Foundation, which focuses on supporting children, the homeless and animals in need.

* Rich is a talented artist.  He began sketching at a young age and, according to his official website, drawing family and friend.  He has also drawn many sketches of the politicians and celebrities he impersonates.  He displays several of these charcoal sketches in his shows.

* Rich's greatest feat is, not surprisingly, getting a sore throat.