All About The Queen's Gambit: Will there be a Second Season? 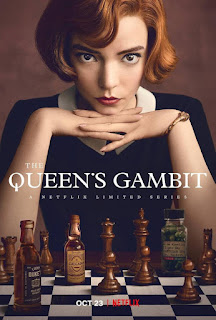 "The main conflict in The Queen's Gambit is not between the protagonist Beth Harmon and her brilliant opponents across the chess board.  It's between her and her struggles with addiction."

The Queen's Gambit is a Netflix coming-of-age period drama, set during the Cold War of the 1950s and 1960s.  This incredibly popular miniseries is based on a 1983 novel of the same name by Walter Tevis.  Although the story is fictional, it was inspired by real-life events.  It begins in the mid-1950s and it chronicles the life of Elizabeth "Beth" Harmon, an orphaned chess prodigy, played by Anya Taylor-Joy.  The series also features a stellar supporting cast including Marielle Heller, Bill Camp, Harry Melling, Moses Ingram and others.

The Queen's Gambit debuted on October 23, 2020.  In four weeks, it became an enormous hit and even sparked a renewed interest in the game of chess.  Netflix says that The Queen's Gambit is the most-watched limited series in the history of the streaming service.   It was created by Scott Frank and Allan Scott.  Scott Frank, the writer and director of every episode of the seven-episode drama series, says the appeal of The Queen's Gambit is that is is a story that's "not about the game, it's about the cost of genius."   Beth is driven to become the best chess player in the world, but she she tries to conceal a growing dependency on the drugs and alcohol that she uses to function in a competitive and demanding environment.

Despite the popularity of The Queen's Gambit, it does not seem likely that there will be a second season of the show.  It was made as a limited series and the story is not designed to be extended. The series is quite faithful to Walter Tevis's novel.  Since Tevis passed away the year after The Queen's Gambit was published, so there is no sequel to his novel and no additional source material for a second season.  It's not unprecedented, however, for a "limited series" to become a "traditional series."  HBO's Big Little Lies. starring Nicole Kidman, is a case in point.  On the other hand, Netflix has been more rigid with its "limited series" designation.

Here's what series star Anya Taylor-Joy told Town and Country about the potential for  a second season: "If I've learned anything from being in this industry, it's never say never.  I adore the character, and I would certainly come back if I were asked to, but I think we leave Beth in a good place."

Harry Melling, who portrays Harry Beltik in the series, is also open to the idea of new episodes.  However, he has pointed out that there is no more source material.  "It'd be good, right. a Queen's Gambit part two?  The place we end in the limited series is the place we end in the book.," he stated last year.  "I don't know if there can be another one, but stranger things have happened."

Writer/director Scott Frank is extremely satisfied with the series as it stands and may not want to rock the boat.  In an interview with Entertainment Weekly, he said, "This was the single best experience I've had in a 30 some-odd year career of really nice experience.

WHAT DOES THE CHESS TERM "THE QUEEN'S GAMBIT" MEAN?

For those who are not familiar with chess, the "Queen's Gambit" refers to the oldest opening move in the history of the game, dating back to the 15th century.  It occurs when White offers a wing pawn in exchange for better control of the centre of the chess board.  It is called the "Queen's Gambit" because it begins with the Queen's pawn.  The "gambit"  refers to trading a piece for control of the middle of the board.

ABOUT ANYA TAYLOR-JOY, THE STAR OF THE QUEEN'S GAMBIT

Anya Josephine Marie Taylor-Joy was born on April 26, 1996 in Miami, Florida.  Her Zambian-born mother, Jennifer Marina Joy, is an English-Spanish psychologist.  Her father, Dennis Alan Taylor, hails from Buenos Aires, Argentina and is of Scottish-Argentine heritage.  He was an international banker who changed careers and became a professional offshore powerboat racer.  Anya is the youngest of six children and she holds American, British and Argentine citizenship.

When Anya was just a baby, her family left Florida and relocated to Buenos Aires. Argentina.  Anya spoke mainly Spanish as a child and did not learn English until she moved to London, England when she was six years old..  Reading Harry Potter books helped her to learn the language.

At 14, Anya moved to New York and then divided her time between the U.S. and England.  At 16, she became a model after being scouted outside Harrods department store in London.  As a result of her modelling work, Taylor-Joy signed with an acting agent. She appeared in a 2014 episode of the British detective drama series Endeavour and in a number of episodes of the British fantasy-adventure drama Atlantis.  Her big breakthrough came with her performance in the 2015 supernatural period horror film The Witch.  She had the lead role in this international co-production of the United States and Canada.

Anya starred in the 2017 BBC One miniseries The Minaturist.  In 2019, she had a starring role in the acclaimed BBC One period crime drama series Peaky Blinders and also the Netflix fantasy drama series The Dark Cyrstal: Age of Resistance.

Anya Taylor-Joy did not know how to play chess before she took on the role of chess prodigy Beth Harmon.  In an interview with NPR's Scott Simon, she was asked if she felt it necessary to learn how to play the game for the role.  She replied, ""Yes, absolutely.  And, I mean, I had to have a theoretical understanding of chess because I didn't feel confident or arrogant enough to show up on set and pretend I knew what I was talking about."

So, Anya trained with world-renowned chess instructor Bruce Pandolfini in order to learn the basics of the game.  With the success of The Queen's Gambit, her star continues to rise.

ABOUT WALTER TEVIS, AUTHOR OF THE NOVEL, THE QUEEN'S GAMBIT

Walter Tevis, the author of The Queen's Gambit was a "class C" chess player.  Tevis was born in San Francisco, California, U.S.A. on February 28, 1928.  He lived in San Francisco for the first ten years of his life.  When he developed a rheumatic heart condition, his family placed him in convalescent home for a year.  At the convalescent home, young Tevis was drugged three times a day with phenobarbital, a barbiturate.  Of the drug, Tevis stated, "I loved it.  That may be one reason I became a drunk."

It's no coincidence that Tevis's Queen's Gambit protagonist, Beth Harmon, is given green pills daily as a child in an orphanage (In the 1950s and 69s, it was not uncommon for orphanages to give children "tranquillizers " or "Mother's Little Helper," as they were nicknamed).

While Walter stayed in the convalescent home, his family returned to Kentucky, where they'd been given a land grant.  At the age of 11, Walter travelled by train to rejoin his family there.  At 17, he served in the Pacific during World War II as a Navy carpenter's mate aboard the USS Hamilton.

Tevis attended the University of Kentucky, where he earned a B.A. (1949) and an M.A. (1954) in English Literature.  While a student, he worked in his friend's pool hall..  He became a decent player and he wrote his first "pool hall" story, The Hustle, which was published in Collier's magazine in 1955.

Walter's first novel, The Hustler, was published in 1959.  It was the story of pool hustler "Fast Eddie" Felson and was made into 1961 film starring Paul Newman and Jackie Gleason.  Walter also wrote a 1984 sequel to The Hustler called The Color of Money, which was turned into a film starring Newman and Tom Cruise.

Walter's second novel, The Man Who Fell to Earth, a work of science fiction, was published in 1963.  For the next 14 years, he taught English literature and creative writing at the Ohio University in Athens, Ohio, publishing very little.  In 1978, he moved to New York City and returned to full-time writing.  It was during this time that he wrote The Queen's Gambit.  The novel was released in 1983 and Tevis told The New York Times that it was a tribute to "brainy women."

Walter Tevis spent his last years in New York, where he died of lung cancer on August 9, 1984.  He was 56 years old at the time of his passing.  During his writing career, he published six novels and more than two dozen short stories for a variety of magazines.