Is there trouble in paradise already for newlyweds Abby and Chance?  Since her marriage, Abby has been totally obsessed with having a child.  She freaked out when  her pregnancy tests came out negative.  She couldn't seem to relax and give it time.  She refused to just settle into her new marriage before having a child.  I found her impatience very annoying.  After all,  she had just recently returned from her honeymoon.  It wasn't as if she had been trying for years.

After being checked by her doctor, Abby learned that she had scar tissue related to s miscarriage she had suffered when she was married to Dr. Stitch.  As a result, she underwent a procedure and discovered  that she would not be able to conceive due to the scar tissue.   Now she's devastated.  A sympathetic Traci reminded her that she had options.  Abby is not ready to explore those options yet, but I think that's the direction this storyline is taking.

I am not pleased with many aspects of Y&R right now.  For one thing, the writing is still sluggish and there is still too much repetition.  The  characters sit around discussing the same thing over and over.  A A little less talk and a bit more action is needed.  It seems to me that the current head writer, Josh Griffith, takes a different approach than his predecessor, Mal Young.  Mal Young's storylines moved too fast and ended too abruptly.  The only storyline Griffith could have fleshed out more was the "Who Shot  Chance?" mystery.  It lacked suspense and failed to develop into a juicy whodunnit.  It just faded away and Billy was quickly declared innocent and released from prison.

Victor Newman has not been the same sine he retired as CEO of Newman Enterprises.  To be honest, he's lost his edge.  He needs to take a more active role in the storylines.  He has become too calm and grandfatherly/  All he does now is try to help Adam.

There are several characters on the show who haven't had real storylines for a while.  I am referring to Michael and Lauren, Nikki and Traci.  It seems as if the writers have difficulty finding storylines for older actors.  They have talent, so why waste it?  Why not take advantage of what they have to offer?  The writers tried to give Traci a storyline and paired her with Cane.  That was a very bad decision and it went absolutely nowhere.  Then Daniel Goddard, who portrayed Cane, was let go.  Can't the writers come up with something better for Traci?

As for Jack Abbott, why are the writers taking so long to get him involved in a romantic entanglement.  I realize that Dina's illness and death has been a harrowing experience for him.  However, it's about time he started dating and meeting women again.  Perhaps he could become involved in a good old soap opera love triangle.  I just hope he doesn't fall for Sally Spectra.  Right now, he is very sympathetic towards her.  He defends her when she is criticized.  However, I really don't won't to see Jack being taken in by a cunning and ambitious younger woman.

The writers also don't seem to know what to do with Adam Newman.  He's all over the map.  One day his angry and unbalanced.  Another day he claims that he is a new man and that he has left his demons behind.  He swears there will be no more vindictiveness from him.  I realize that soap characters, like real life people, can be complex.  They are not always black and white.  Adam has many sides to him.  However, he seems to changing too often and he is always veering in different directions.

Speaking of Adam, he and newlywed Sharon just can't stay away from each other.  Phyllis seems to be the only one who can see right through them.  There's a look in their eyes when they see each other, as if they long to be together. (It may be because they appear to be a couple in real life).  Sharon just had to phone Adam after she saw him at the coffee shop.  Poor Rey is definitely in for more heartache.  I don't blame him for being upset whenever Adam shows his face.  It is  inevitable that Sharon will at some point abandon him for Adam.

Meanwhile, Chelsea has not been making much progress in recovering from her stroke.  I have to give Melissa Claire Eagan credit for her portrayal as a stroke victim and for appearing onscreen without makeup.  The look in her eyes when she Sharon paid a visit was incredible.  It was so intense and so visceral that Sharon wanted to leave immediately.  Chelsea was so emotionally upset by Sharon's visit that she made a sound for the time since her stroke.

The feud between Sally Spectra and Summer is intensifying.  Snowflake finds Sally a real threat.  Otherwise, why would she be taking the time to investigate Sally's past in Los Angelis.  I've been enjoying the L.A. scenes and the crossover between Y&R and The Bold and the Beauiful.

A rose to Mishael Morgan for her performance as Amanda in those emotional scenes in which she confronted her mother.

A rose to Melissa Claire Egan for her portrayal of Chelsea as a stroke victim. 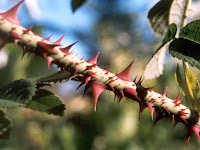 A thorn to Brytni Sarpy (Elena Dawson) for her latest hairstyle.  This is purely subjective, of course,  but I don't think her short hair does her justice.  I think her other style was more attractive.  I wonder what her real-life boyfriend, Bryton James, who plays Devon on Y&R thinks of her hairstyle. 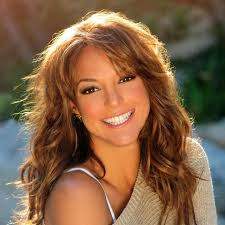 Eva LaRue, who plays Celeste, matriarch of the Rosales family, has tested positive for COVID-19.  When Eva's TV son, Rey, married Sharon Newman on New Year's Eve, her Celeste character did not appear at the wedding.  She only made a virtual appearance by phone and congratulated the newlywed couple.  I wondered why Celeste wasn't there in the flesh like her other son, Arturo.  Now the answer is clear.

Eva, 54, iz receiving IV treatments that she hopes will minimize any long-term effects from the virus.

Get ready for the return of Judith Chapman as Gloria 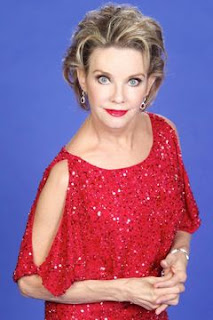 Young and Restless fans will be seeing Gloria Fisher Bardwell back on their screens soon.  Judith Chapman, who portrays feisty Gloria, recently underwent COVID testing in order to start filming new episodes of the show.

Judith has been playing Gloria off and on since 2005.  Her character was last seen in Genoa City in a couple of episodes last October.  She returned to GC to visit her new grandson, Miles, and her sons, Kevin and Michael.  She's been living in Los Angeles.  Before returning to L.A.  Gloria left behind a flash drive at the Chancellor estate.  Kevin found the flash drive, which sparked a new mystery about some embezzled money from Newman Enterprises.  Gloria, who is always hungry for money, is at the centre of the mystery.  Our Glo is so desperate that she he may set her sights on wealthy Jack Abbott.  We all know how devious Gloria can be.  Will Jack be able to resist, especially at a time when he is so vulnerable?

I fear that Sally will also make a play for Jack if she does not get anywhere with Kyle.  Jack has a soft spot for her and she will gain real clout at Jabot if she becomes his main squeeze.  She can just rub that in Snowflake's face.  It would not be amused to see her Uncle Jack with Sally.  Why can't Y&R find a more suitable love interest for Jack than Gloria and Sally, someone whose not using him for his money and status?

Victoria Newman is also at the centre of the embezzlement scandal.  Victoria's archenemy, Phyllis, was delighted to learn from Kevin that Victoria knew about the stolen money and that she hid hidden the scandal.  Phyllis correctly surmised that Victoria didn't want daddy Victor to find out about what happened.  Phyllis told boyfriend Nick Newman that she had decided to take the high road and wouldn't blackmail Victoria.  However, Phyllis being Phyllis, she will eventually use the information against Victoria, even at the risk of alienating Nick.  Nick may be irritated with his sister right now.  He doesn't like how she's conducting herself at all.  Still, Phyllis will go too far.  She can't help herself.

As I've pointed out, it doesn't look as if Sharon will be able to stay away from Adam. Poor Chelsea has suffered a stroke, but she will eventually recover. As for Rey, it seems as if he is going to be taken to the cleaners for a second time - first Mia and now Sharon. What do you think fans?  Will Sharon stay with Rey or leave him for Adam?  Respond to the poll below and let me know.
Will Sharon and Adam end up together?
Created with Poll Maker

If you have any comments on Y&R, please email them to me with "Viewer Forum" in the subject line. I will be happy to publish your comments and reply to them  You do not have to use your real name.  I really need your input.  I really need to hear your opinion.  I want to know if you agree or disagree with me.
My email address:  jmadden16@yahoo.ca

That's all for now.  Please remember that the next edition of Y&R Report will appear in this space on Saturday, January 30, 2021.