Betty White's 99th Birthday and the Re-release of Pet Set

TV legend and animal activist, Betty White, celebrated her 99th birthday two days ago (Betty was born on January 17, 1922 in Oak Park, Illinois, USA).  Her many friends and admirers flooded social media with well wishes on her special day.

Here's what Betty tweeted about turning 99:
"Would you believe it?!  It's my 99th birthday which means I can stay up as late as I want without asking.  I am also very pleased to let you know about the re-release of my long-lost series after fifty years!  I am just so proud of the “Pet Set”.  I hope everyone is safe and well."
Betty shared a clip on Twitter of her long-unseen series, The Pet Set, which featured animals and animal lovers.  The 1971-72  syndicated talk show lasted 39 episodes   It was hosted by Betty and produced in part by her late husband, Allen Ludden of Password fame.  The idea for the show came about after Ludden challenged his wife to create a show reflecting her longtime passion for animals.  The couple presented their idea to the Carnation Company, which sponsored the series,
On Pet Set, Betty interviewed many high-profile guests such as Carol Burnett, Mary Tyler Moore, James Brolin, Jimmy Stewart, Vincent Price, Doris Day and Marlon Brando, who showcased their pets.  She visited a wide range of animals - from dogs, cats, birds and horses to elephants, wolves and lions and bears- both in the studio and on location.
Below is a phot of Betty on The Pet Set with guest star James Brolin and his Great Dane Buck. 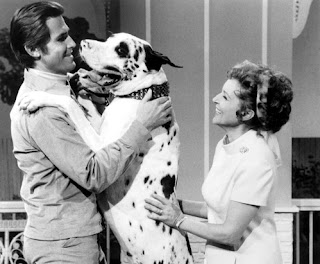 According to Betty White's 1995 autobiography Here We Go Again: My Life in Television, "Pet Set" was cancelled due to the Carnation Company's decision to earmark its advertising budget solely for commercials rather than to allocate some of its finances for programming.  Pet Set was not cancelled because Betty took on the role of Sue Ann Nivens on The Mary Tyler Moore Show in 1973. 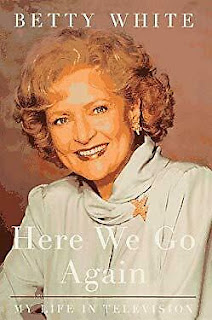 Unfortunately, due to COVID-19, Betty spent her 99th birthday in quarantine.  Next year, when Betty celebrates her 100th birthday, the pandemic will have subsided and she can celebrate to the max.
Note: As of February 23, Pet Set will be streamed on Apple TV, Google Play and Prime Video.
SOURCES: Vulture, "Betty White Celebrates Her 99th Birthday With Carol Burnett Feeding a Babby Elephant," by Halle Kiefer, January 18, 2012; ET Canada, "Betty White Trends on Twitter as Celebs Pay Tribute On Her 99th Birthday," by Brent Furdyk; January 17, 20201; Lost Media Wiki "LMW " (lostmediawiki.com), "The Pet Set (partially found Betty White talk show; 1971-1972)"; Wikipedia
- Joanne
EDITOR'S NOTE:  Sadly, Betty White never reached her 100th birthday.  She died on December 31, 2021.  She would have turned 100 on January 17, 2022.
Posted by Joanne at 11:50 AM