On December 5, 2019, I posted an article on Canadian-born entertainer Rich Little.  I recently received some correspondence from Lyndsay Cottrell, the daughter of the legendary impressionist.  She says that her father is "doing great, healthy as ever ever and performing, which is his favourite thing to do."  He performs at the Tropicana Hotel in Las Vegas four nights a week (Thursday to Sunday).  He has an autobiographical one-man show called "Rich Little Live." at the Tropicana's Laugh Factory.

Lyndsay Cotrell was born in 1988 in Wilmington, Delaware and her mother is Lalette Cotrell.  She describes her parents as "great friends."  Rich has another daughter, Bria Little, from his marriage to Jeanne Worden.

Lyndsay has been a resident of Las Vegas for about seven years now and has a fiancé named Garrick.  She is the mother of two children, a daughter named Alaina, 10, and a son, Lincoln, 3.  She says  that she "loves being a mother" and that "my kids are my everything."

I asked her about how the pandemic is affecting Las Vegas.  She informed me that the Strip is still open but that there are no shows except for her father's and a few others.  The casinos, however  "are booming like always."  Why am I not surprised about that?

In his show at the Tropicana, Rich Little continues his tradition of impersonating many actors, singers and politicians he has known throughout his stellar career, especially American presidents.  The show includes impressions of both Donald Trump and Joe Biden. 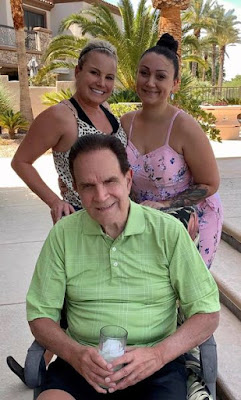