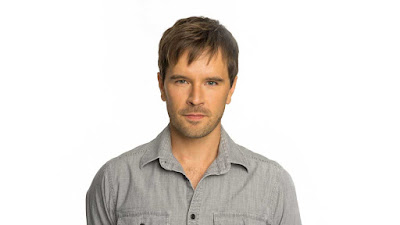 I am a huge fan of CBC's Heartland.  It is the longest-running drama on Canadian television and its fans have been following the fortunes of their favourite characters on the series for years.  They love watching the adventures surrounding the Bartlett/Fleming family and their idyllic horse ranch in the foothills of the Rockies.

Last Sunday night, I settled down  to watch the opening episode of the show's 14th season.  I was eager to watch the latest happenings in the fictional town of Hudson, Alberta.  Within the first few moments, Ty Borden, husband to Amy Fleming, and father of their little daughter, Lindy, collapsed and died of undetected complications from a gunshot wound he suffered in the final episode of Season 13,  It was shocking because I, like many other fans of Heartland, have watched the show for so long that we have become emotionally involved with the characters.  It's difficult to imagine Heartland without Ty or Amy without Ty.  We saw them meet as teenagers.  We saw Ty mature and become a veterinarian.  We saw them get married and have a child .

In an online interview, Graham Wardle, who played Ty, said he felt it was time to move on after 13 years with the series.  In another interview in the Calgary Herald , Wardle's co-star, Amber Marshall (Amy), said that Wardle revealed his plans to leave the show in a phone call to her about two years ago.  His departure has been kept a secret.  Here's what Marshall had to say about the shocking storyline. Keep in mind that the interview took place before Sunday's episode was aired.

"This is a story that people might not want to see in the beginning.  I think there's going to be a lot of people devastated by this.  But I believe the journey through this season is so important for viewers to watch and to know that death is real.  Death is something that impacts all of us at some point in our lives.  To see this widowed mother find the strength and courage to move forward for her daughter and really think about what's best for the family around her and to come together an be that support I think is so important.  And to know that it isn't easy.  There's nothing easy about death and it shouldn't be.  But to honour that person and that person's journey and by moving forward and living each day is the best way that you can"

At the time of Amber Marshall's interview, Wardle's departure was still a secret and she did not wish to speak for him.  However, she did say that he left to pursue interests other than acting.  He recently launched a podcast called Time Has Come.  On a YouTube trailer last May, he stated that his podcast is designed to focus on "people stepping outside their comfort zone and into a world, into a life, into a vision of the future that they desire."

When Graham Wardle decided to leave the show, what choice was there but to write Ty out?  I don't think fans would have accepted another actor in the role of Ty.  The writers could have had Ty go to Mongolia again, as he did once before.  He and Amy could have gotten a quickie divorce.  Nah.!  None of that would have worked.  So, Ty's death was written into the script and Amy, is now a grieving widow, with a child to raise.

Ty was far too young to die and that doesn't often happen on television shows.  However, it does happen in real life.  Last Sunday, Heartland gave its viewers s a dose of the hard, cold reality of death and of life's unexpected changes.  It stung.  However, Graham Wardle felt it was time for a change and he had to do what was right for him.  He had to move on.